On the morning of Thursday 23 June, the BepiColombo probe, built by the European Space Agency (ESA) in collaboration with the Japanese one (JAXA), made a new close passage to Mercury, the planet closest to the Sun. the approach of the probe to the planet, which will continue until 2025, has made it possible to take some new photographs of Mercury, which may be useful for new analyzes of the characteristics of its surface and its composition.

Among other things, BepiColombo photographed the Caloris Basin, a crater that was formed following the impact with another celestial body and whose diameter is almost 1,400 kilometers. Today the basin appears as a large plain and is the largest impact present on Mercury, near the Caloris Montes, mountains that reach 2 thousand meters above sea level. 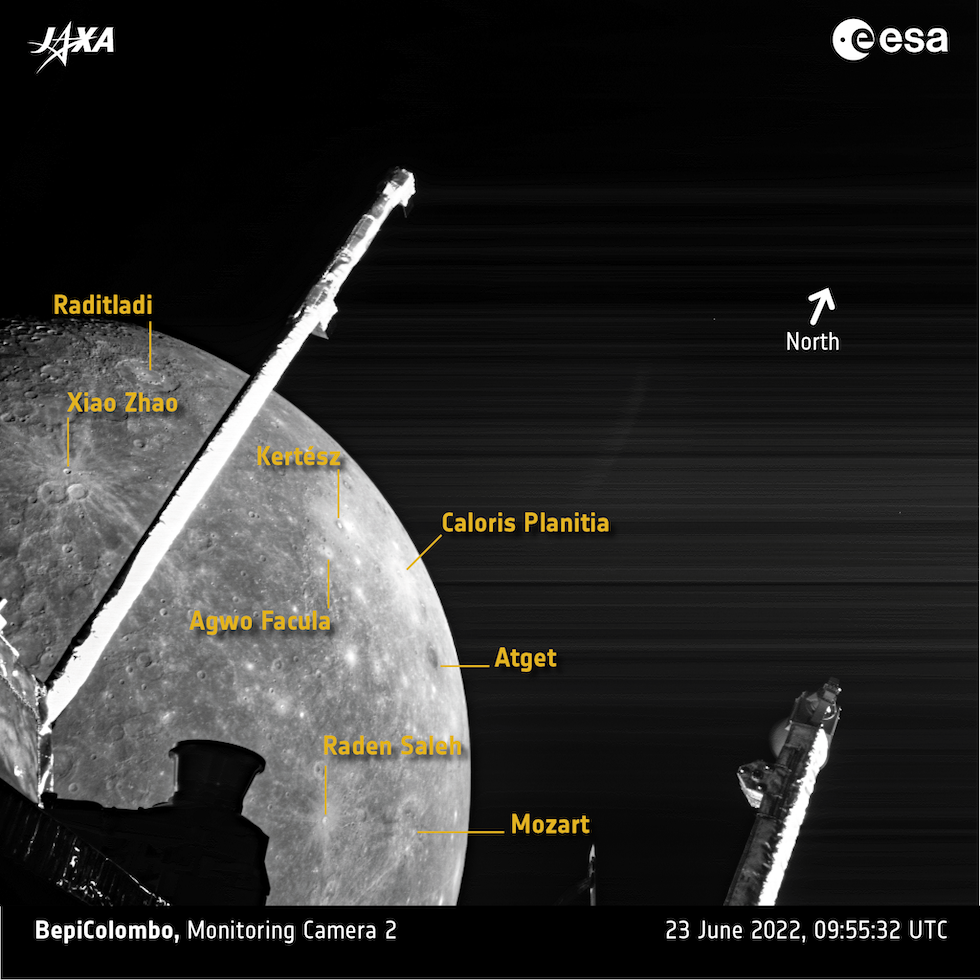 The probe has meanwhile continued its journey, which will lead it to get closer and closer to Mercury, until it can be analyzed closely and more calmly during the actual scientific mission, which will begin in the early months of 2026.

The name “BepiColombo” derives from Giuseppe Colombo, known as Bepi, an Italian mathematician and astronomer who in the twentieth century dedicated many of his studies to Mercury and its exploration. It was Columbus, for example, who proposed to NASA the system of interplanetary trajectories to follow, exploiting the orbital thrust of Venus, to allow the Mariner-10 probe to make close passages.

BepiColombo consists of two probes. Mercury Planetary Orbiter (MPO) will maintain an altitude between 480 and 1,500 kilometers from the surface of Mercury. It has numerous instruments to carry out surveys and experiments. Among these there are several designed in Italy: ISA, to study the internal structure of the planet, MORE to detect its gravitational field with more precision, SERENA to study the interactions between Mercury and the Sun, SIMBIO-SYS to study the geological history of planet and soil composition.

The second probe, Mercury Magnetospheric Orbiter (MMO), will behave like a kind of spinning top, spinning 15 times per minute, at a distance between 590 and 11,640 kilometers from the surface of Mercury. It will have the task of collecting data on Mercury’s magnetosphere, that is, on the magnetic field generated by the planet, significant despite its small size. From the observations of the previous probes, we know that the planet is able to deflect part of the solar wind, reducing the processes that would otherwise quickly consume its surface (erosion).

Mercury is a rocky planet like the Earth, but its proximity to the Sun makes it decidedly inhospitable: the temperature on its surface varies, depending on the periods and areas, between 430 ° C and -180 ° C. At its poles it has areas that are constantly in shadow, where there are ice clusters, but on average its surface is roasted by the sun’s rays. The presence of craters and irregularities tell us that there have been earthquakes and volcanic eruptions on Mercury, a bit like in our country. Mercury is only 4,879 kilometers in diameter, less than half that of our planet.