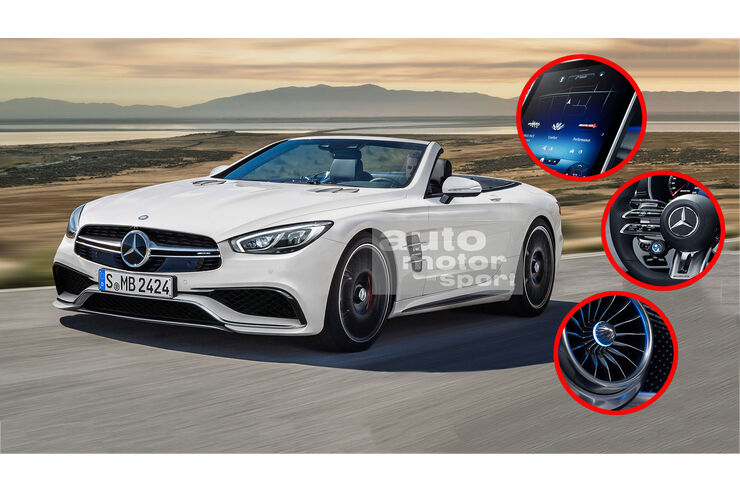 The new Mercedes-AMG SL should be significantly sportier than the current model, although the focus is still on comfort and cruising properties. In order to prevent the AMG GT and SL from racing each other in the future, both should develop differently: the SL towards the sporty 2 + 2-seater with a fabric roof, the AMG GT even more towards the uncompromising athlete.

The basic layout of the roadster can be seen in the pictures of the prototype, which is still camouflaged. At the front it carries the Panamericana grille and narrow headlights. The window line rises, the exterior mirrors are enthroned on the door sill. A massive apron with square tailpipes and slit-shaped lights can be seen at the rear.

The folding fabric roof comes in black and red. What is striking about the newer pictures with the small license plate area are the strong beading that can be seen on the side.

The driver reaches into a sports steering wheel with a flattened bottom and a protruding impact pot. The three double spokes of the flounce are equipped with two additional satellite switches, among other things for the comfort and sport settings. The 12.3-inch LCD cockpit display in front of the steering wheel provides information on the most important driving data. In order to prevent glare when driving open-top, AMG unceremoniously gave the roadster a deep cockpit surround, creating a “hyper-analog cockpit”. Different display styles allow the driver to personalize his instruments, and AMG also offers a head-up display as an option.

The touchscreen in the center console is electrically adjustable.

The interior is dominated by the wide center console with the integrated touchscreen, as we know it from the Mercedes S and C class. The 11.0-inch multimedia screen is electrically adjustable so that the infotainment display can be read without glare. Of course, the MBUX system 2.0 is also used in the Mercedes-AMG SL, but the Affalterbach-based company has implemented the system AMG-specifically with new menu items “Performance” and Track Pace “and added an AMG look.

Another eye-catcher is the symmetrical instrument panel, which merges almost seamlessly into the door panels. It houses four protruding galvanized turbine-style air streams. The Burmester loudspeakers with perforated metal panels and the extensive control panels for the seats and window regulators are also striking. Of course there is an ambient light in 64 colors.

The driver and front passenger take their place on sport or performance leather seats that appear light and filigree. They are optionally available in one- or two-tone nappa leather or with diamond quilting. The icing on the cake are leather seats with microfiber and red or yellow contrasting stitching. 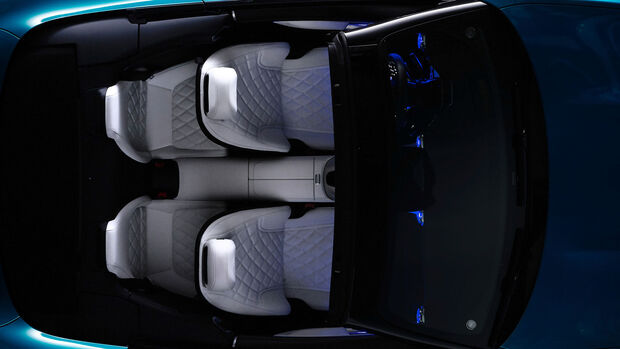 For the first time since the SL series R129, the SL is again designed as a 2 + 2-seater. However, the rear seats are limited to people who are not taller than 1.50 meters. If the two seats are not occupied, they are suitable as additional storage space or to install a wind deflector between the front seats. 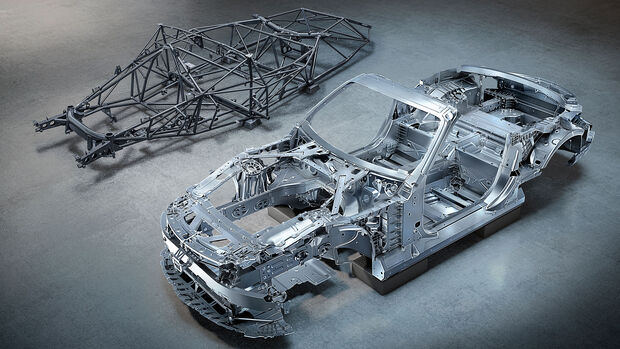 The current aluminum shell compared to the tubular space frame of the original SL.

The new roadster architecture consists of the combination of an aluminum space frame with a self-supporting structure. Not a single component was adopted from the predecessor SL or, for example, the AMG GT Roadster. A material mix of aluminum, steel, magnesium and fiber composites ensures the highest possible rigidity with low weight.

Formed from high-strength steel tubing, the windshield frame, in conjunction with a bracket system behind the rear seats that can be extended at lightning speed, forms the rollover protection package. Compared to the previous series, the torsional rigidity of the bodyshell structure has increased by 18 percent. The transverse rigidity is 50 percent higher than that of the AMG GT Roadster, the longitudinal rigidity is 40 percent higher. The weight of the pure shell without doors, bonnet and trunk lid as well as without add-on assembly parts is around 270 kilograms. 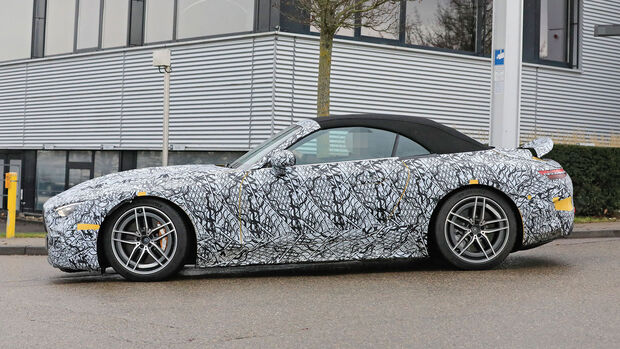 In the side view, strong beads can be seen under the camouflage.

The subject of drive becomes a little clearer not least through the first Erlkönig photos of the AMG GT 4 door. After Mercedes had protected various model names with the 73 nomenclature, the top model will be the Mercedes-AMG SL 73 with the small addition “e”.

The model from the R232 series has the 4.0-liter twin-turbo V8, which, with electric motor support, will generate around 800 hp as a hybrid. This drive train was already on display in the GT Concept study at the 2017 Geneva Motor Show – but here with 816 hp. The production model comes with the 4-Matic all-wheel drive system and presumably with rear-wheel steering. The top V8 is coupled with a new nine-speed automatic. Chassis, brakes and exhaust system have been significantly modified compared to the civil SL models and adapted to the increased performance. And what about a fully electric Mercedes-AMG SL? In the long term, the Affalterbach company will not be able to avoid the subject of electrification. Ex-AMG boss Moers knew that too, who only gave the record that “at some point there will be no way around a fully electric AMG”.

We can therefore assume that the platform developed by AMG will offer maximum flexibility, from the classic combustion engine to the complete electric drive. In the basic version there is the SL 43 with the three-liter in-line six-cylinder, which will only be launched with rear-wheel drive. The unit currently has 367 hp and 500 Nm, which should be a little more in the new SL. This is followed in the engine portfolio by the all-wheel drive versions of the SL 53 and 53e with the three-liter in-line six-cylinder including exhaust gas turbocharger and additional electric compressor, which will produce at least 435 hp. Then there is the SL 63 with the four-liter V8 in a power level with over 640 hp. The AMG’s V12 engine will no longer exist.

It should also be certain that the new SL will be significantly lighter. Depending on the type of drive, the roadster with its fabric roof weighs less than 1.7 tons. The current R231 weighs between 1,730 and 1,845 kilograms. For the interior, Mercedes naturally provides contoured sports seats and a sports steering wheel with a flattened bottom. Wood, aluminum and leather dominate the interior. There is also the MBUX infotainment system with touchscreen and the digital cockpit. Like its predecessor, the new SL will be built in Bremen.

Not possible with such an icon!

Daimler is focusing. In all areas. When it comes to sports cars and roadsters, there is a clear stable order: AMG in Affalterbach is responsible for development. This is why the next generation of the SL will no longer be a classic Mercedes, but a real AMG child. The restart can only do the roadster icon good. Classic roadsters are currently real slow-moving goods. Then why not try a rebirth as an e-car right away? It would fit the innovation-laden SL history.