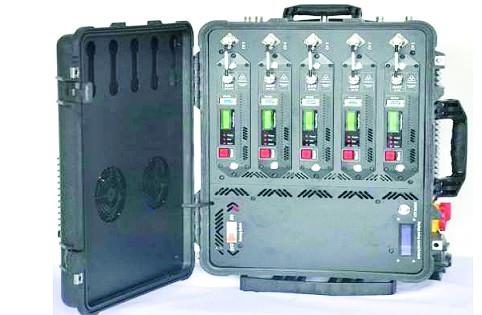 The accusation of Medusa case has revealed the unwillingness of the authorities to block cell phone signals from prisons, which has allowed criminal networks to continue operating from prisons.

In the file there are several certifications from the penitentiary authorities that show that in none of the penitentiary centers there are signal blockers telephone lines, and that despite the claims of some sectors, in the management of Jean Alain Rodriguez in the Attorney General’s Office (PGR) three were acquired, although “these devices were given a different use than those that were requested.”

The file establishes that these three devices are in the possession of the Specialized Prosecution Office for Administrative Corruption (Pepca) as evidence for the Medusa case. Meanwhile, the different penitentiary centers continue to lack this tool against crime.

They are the blockers that the Attorney General’s Office has and none of them are working in prisons.

“The General Directorate of Prisons certifies that they do not have any Liberty Deprivation Center (CPL) with equipment Signal Blockers of cell phone services. It is evident that despite the fact that the Attorney General’s Office, on two occasions, bought three signal blockers in order to be sent to the Penitentiary Centers and Jails of the Dominican Republic, the corresponding deliveries were not made. These devices were given a different use than those requested, due to malicious actions by Javier Alejandro Forteza Ibarra and Jean Alain Rodriguez Sánchez”, establishes the accusation of the Public Ministry.

indicates that of the three signal blockers acquired by the Attorney General’s Office, two of them were assigned to the Presidential Security Corps (Cusep) for security work for former President Danilo Medina Sánchez, while the other was used on private property of the accused Jean Alain Rodriguez Sánchez.

The Attorney General’s Office awarded the purchase of the jammers to two companies; Grupo Cheyrodz SRL and Aldelay Groupe SRL It did so between 2018 and May 2020. These purchase processes are questioned in the Medusa accusation, due to alleged irregularities. More than 6 million 698 thousand pesos were spent on the purchase.

“In the records there is the contract for the supply of goods No. 0095/2019… through which the company name Grupo Cheyrodz SRL undertook to supply two signal blockers for an amount of RD$2,724,313.89”. The third blocker was awarded to the company “Aldelay Groupe SRL (sole participant), for an amount of RD$3,974,159.76,” says the file.

At the beginning of his administration, in September 2020, President Luis Abinader acknowledged that “crimes are being organized from the prisons of the Republic” and promised to make efforts to improve the prison system. He also promised that the government would find a way to block cell phone calls from prisons until the reform of the prison system is completed.

Practicing journalist since 2014. He has practiced the profession in the main print media in the Dominican Republic. She writes about court cases, human rights, crime, and other social issues.