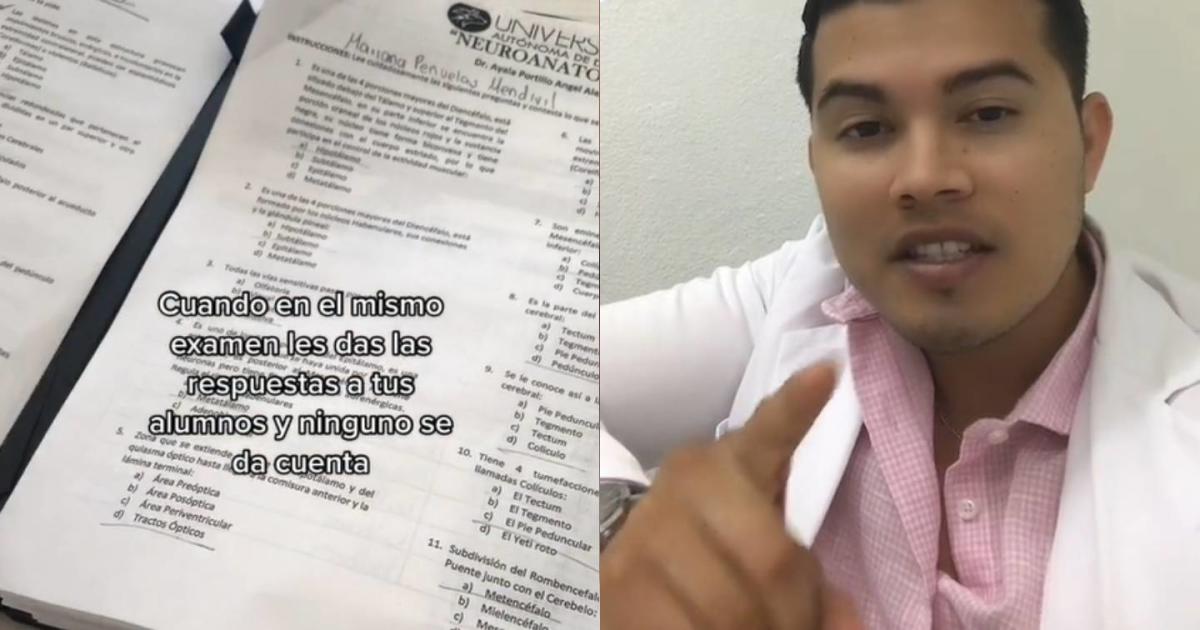 Medicine teacher took an exam with hidden answers and nobody noticed

Professor Alexis Ayala, from the Autonomous University of Durango (AUD), who teaches Neuroanatomy classes in the first year of the General Medical Degree, shared a video on his TikTok account where he showed that he had posted the answers to the final exam on the same test and none of the students found out.

“When in the same exam you give your students the answers and none of them realize it,” Alexis wrote in the recording and showed the exams, which were multiple choice and open questions, of his students. In them it is seen that, on the last page, which had ‘rescue questions’, she stuck a napkin on which she wrote “take it in case you need it” next to a picture of a person crying.

Then the teacher showed that inside that paper there was a printout with 13 answers and with the message: “curiosity did not always kill the cat, sometimes it did find the answer to its doubts”.

The ‘rescue questions’ put by Alexis Ayala were also funny and ingenious because there are things like: “what does it take for four people with an umbrella not to get wet”, “everyone knows them as Panchito, why?” and “who is this Pokemon?” along with Chikorita’s shadow.

Among the comments, one of his students wrote: “I didn’t have time to grab the napkin”, to which the teacher replied: “You did well anyway, you didn’t need it, I was glad”. A teacher mentioned that she did something similar: “when she was a teacher she gave them the correct answers with a full stop and they never realized it.”

Alexis Ayala also answered a comment in which the person implied that the test was to give the grade to the students, for which he explained: “it was an ordinary exam, that is, the people who took it are students who did not achieve a grade. of 9 in the average of its three partials”.

The teacher pointed out that the test had a value of 30% because it did not seem fair that those who did not make an effort throughout the cycle obtained a good grade with a single exam, so the other 70% was obtained from the average of their three partial exams. .

Regarding the test, he indicated: “yes, it is true that I put multiple choice questions, 13 of them and 37 open, giving a total of 50 questions. Of the 13 I gave them the answers wrapped in a napkin, as you saw, but unfortunately for my students, none of them noticed this, I also gave them five rescue questions of which I only counted one as correct. So getting a good grade wasn’t as easy as it seemed either.”

Thieves are caught in the most unexpected way after violent robbery