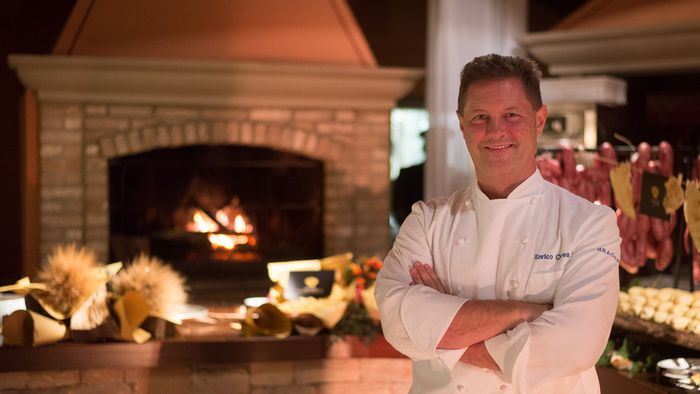 A stellar evening to conquer the final. In an unprecedented role, the Italian tennis champion Matteo Berrettini.

The five competitors remaining in the kitchen of MasterChef Italia are one step away from the realization of their dream and feel the increasingly intense perfume of the final evening when the judges Bruno Barbieri, Antonino Cannavacciuolo and Giorgio Locatelli will be able to choose the eleventh Italian MasterChef.

To reach this goal, only the latest tests are missing, the hardest but also the most exciting, starting with those that will see the amateur cooks engaged on Thursday 24 February – on Sky and streaming on Now – in an evening in the true sense of the word. «Stellar»: first they will be able to meet the Italian tennis star Matteo Berrettini, special guest with an unprecedented and surprising role, then they will be able to enter the extraordinary three-star cuisine of the Da Vittorio restaurant of the Cerea family, three Michelin stars and temple of Italian cuisine.

Competitors in the race

The five who compete for access to the final evening of the cooking show produced by Endemol Shine Italy for Sky are Carmine, an 18-year-old student from Montecorvino Pugliano (Salerno) in the last year of scientific high school, who despite his very young age showed a incredible talent; Christian, 20 years old from Bosconero (Turin), a student of food chemical engineering, who told from the beginning of his career that he was affected by Asperger’s syndrome and has always shown himself rational in his choices; Lia, a 30-year-old banker from Costermano sul Garda, near Verona, always endowed with great security and determination, both in the kitchen and in her character; Nicky Brian, born in Rome 28 years ago from a family originally from Sri Lanka, is now a designer in Brighton (UK) where he lives with his girlfriend Andrea Letizia, also a competitor in this season of MasterChef Italia but eliminated a few weeks ago ; and Tracy, 31, born in Nigeria and for 15 years in Vallese di Oppeano (Verona), where she works as a waitress, who stands out for the colorful scarves she wears in her hair and for a strong Venetian accent.

Matteo Berrettini is also in Brusaporto

For them, Thursday 24 February – with episodes starting at 9.15 pm on Sky Uno, always available on demand, visible on Sky Go and streaming on NOW – will be a decisive evening but full of emotions (and pitfalls). They will face various challenges, from a Mystery Box in which they will have the opportunity to redeem themselves for the mistakes made during this edition to an Invention Test during which they will be asked to face an adventurous test in the dark, up to the outdoor test in which, for the first time, they will enter a three-star kitchen:

they will have at their disposal the stoves of the famous Da Vittorio restaurant of the Cerea family, three Michelin stars and temple of Italian cuisine, in Brusaporto, where they will be able to “taste” the work of real chefs but above all demonstrate their growth during this edition

. With them there will be the Italian tennis champion Matteo Berrettini who, having put down balls and rackets for once, will intervene in the test in a new and surprising role for him.

To conclude the evening, the decisive and insidious Pressure Test from which the names of the amateur chefs will emerge who will conquer a place among the protagonists of the final challenges: who among them will make it and be able to look – never so closely – the goal so dreamed of?