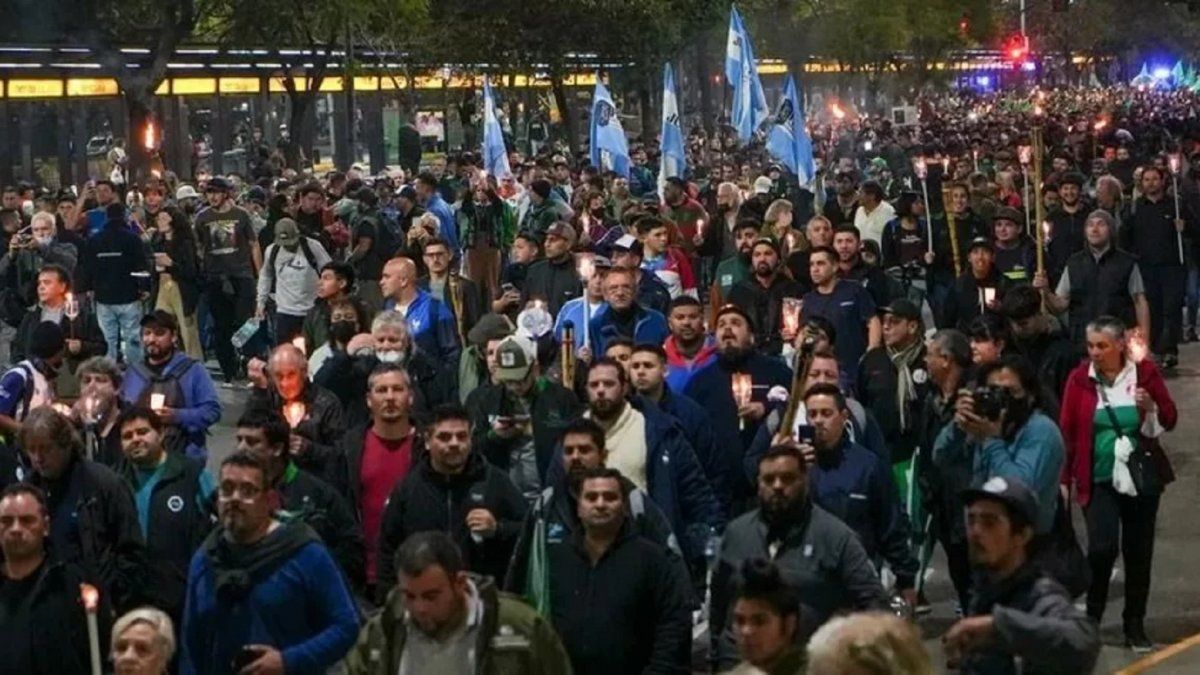 massive tribute to Eva Perón 70 years after her death

A sector of the CGT led by the trucker leader Pablo Moyano, the CTA of Hugo Yasky and the Trade Union Front for the National Model carried out a torchlight march on Tuesday to remember Eva Perón 70 years after her death and expressed their support for the president. Alberto Fernández, Vice President Cristina Kirchner and her repudiation of “the anti-homeland who want to destabilize the Government.”

The march, which had a strong convocation, began around 6:00 p.m. near Independencia and 9 de Julio avenues and went to the Ministry of Social Development, where the historic Ministry of Public Works used to function and on whose sides there are gigantic images of Eva Peron.

At the demonstration, where attendees carried torches and candles that remained lit for almost the entire ceremony, there were militants from CGT and CTA unions, such as Truckers, ATE (state) and Smata (mechanics).

There were also militants from organizations and parties such as Miles, La Germán, the National and Popular Transversal Front, United and Organized, the Federation of Land, Housing and Habitat, MTL, the Martin Fierro National Current, Popular Liberation, the Peronist Social Front and the Communist Party, among others. others.

With the sun going down, around 6:30 p.m., the first torches and candles of the traditional march in tribute to Evita began to light up, after two years without being held due to the coronavirus pandemic.

Hugo Yasky said that “those who have the power to highlight food will not succeed. Eva is present. Long live the unity, long live the fight.”

Before the crowd, from a stage, Pablo Moyano was in charge of “celebrating the unity that we are having in the street”.

“This is not a march against the government, it is a march defending the president and the vice president,” said the deputy of the Truckers’ Union and co-head of the CGT. Moyano warned that “the anti-country are those who want to destabilize the government to come with the labor reform.”

See also  After 45 years - Südbahnhotel am Semmering should reopen

“Here are those of us who confront macrismo and those of us who are going to defend the government,” said Moyano, who ratified: “On August 17 we mobilized throughout the country; they did not run us from the left or from the right and we are going to show what It is the organized labor movement.

The National Justicialist Party paid tribute this Tuesday to the figure of Eva Perón, on the 70th anniversary of her death, and called for “strengthening her legacy” and defending the “expansion of rights” represented by the emergence of the figure of the “Flagbearer de los Humildes” in the national public scene.

With an act led by the chancellor santiago cafiero; the Undersecretary for Parliamentary Affairs of the Chief of Staff, Cecilia Gomez Gazeand the Buenos Aires Government Minister, Cristina Alvarez Rodriguez (grandniece of Eva Perón), the PJ launched the campaign “Las Mil y una Evita”, aimed at recovering the busts and monuments of Eva Duarte that were vandalized in recent years.

More tributes to Eva Perón throughout the country

Also, from the Secretariat for Women of the Justicialist Party of the City of Buenos Aires, the activity entitled “Eva Perón. 70 years of her passage to immortality: rebuilding the Memory of the Women’s Peronist Party” was carried out in San José 181.

The National Library paid tribute to the life and work of Eva Perón with an activity in the Jorge Luis Borges auditorium, where the director of the institution, Juan Sasturain, led a discussion table with Carolina Barry, author of books on Evita. Admission will be free and free and you will also be able to access the exhibition of a showcase with thematic books belonging to the institution’s collection.

The Ministry of Women, Gender and Diversityled by Elizabeth Gómez Alcorta, invited the public to participate in “a performance action” entitled “Life for Evita”, by the Evita Command, at the Kirchner Cultural Center.

For its part, the Government House of the province of Buenos Aires, through its Cultural Institute, paid tribute to the life and work of Eva Perón with the projection of a historical mapping on the façade of the building and a series of special activities . filed “Avoid, heart of Buenos Aires”with performance activities, dance and music, to celebrate the life and work of the so-called “standard bearer of the humble”.

Commemorative events were also announced in other Buenos Aires cities, such as the activities in White Bay with the placement of floral offerings in the Children’s Park that bears his name, located at Irigoyen 1173.

Meanwhile, the mayor of the small sea partyJorge Paredi, announced the inauguration in Santa Clara del Mar of a 700 kilo iron sculpture created by Sebastián Martino in honor of Evita, which will be placed in a public square that will bear her name.

Multiple commemorative activities were also planned in other places in the interior of the country, such as an act of Justicialist Party of Mendoza andn the headquarters of Luján de Cuyo, and another in the PJ of San Rafael.

In the province of Córdoba, the women of the provincial Justicialist Party placed a floral offering at 10 o’clock and discovered a plaque on the monument to Evita located in Bajada Pucará, in the city of Córdoba. A community mural was inaugurated in the Campo de la Ribera neighborhood.

Meanwhile, the Justicialist Party of Corrientes he also held a “torchlight march” in the provincial capital, under the slogan “Evita, a woman who changed history.” The place of concentration was the corner of Aviador Fernández and República del Libano and she went to Sarmiento and Avenida Maipú where the bust that honors the figure of Eva Perón is located.

In the Eva Perón square, where the memorial is erected in homage to the “Spiritual Leader of the Nation”, floral offerings were placed where “the Peronism of Corrientes will remember the social, political and economic legacy with which Evita marked a turning point in Argentine history, always in favor of the workers and the humble”, remarked the invitation of the provincial PJ.

The Peronism of Neuquen called from 5:30 p.m. to place a floral offering at the monument to Evita, located on Avenida Argentina 150 in the capital city, they informed Telam sources of the provincial Justicialist Party.

Then, they moved to the PJ headquarters where awards were given to outstanding women and the assumption of party authorities was formalized.

In addition, social and feminist organizations met in Río Gallegos with the new Minister of Equality and Integration of Santa Cruz, Agostina Mora, who said that “the idea is to be able, through territorial actions, to show the different legacies that Evita has left us in the participation role of women.