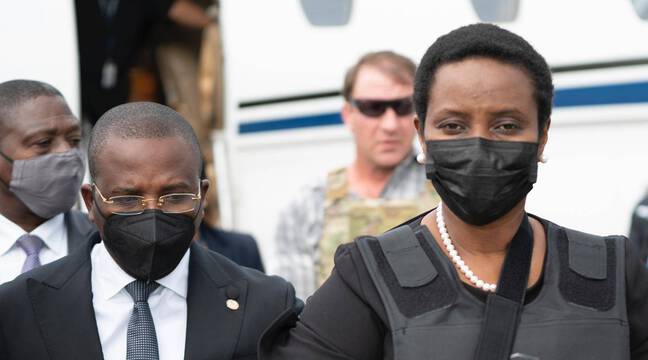 Martine Moïse will be present at her husband’s funeral. The wife of the assassinated Haitian president returned to Port-au-Prince on Saturday, the government said. Wounded in the night attack that claimed the life of President Jovenal Moïse on July 7, she was evacuated to a hospital in Miami, Florida.

“The 1st lady (…) has just arrived in Haiti as part of the preparations for the national funeral” of her husband, scheduled for July 23, tweeted the Secretary of State for Communication, Frantz Exantus. Arriving aboard a private plane, she was greeted by the Acting Prime Minister, Claude Joseph. The right arm in a sling, vest shot over his black clothes, Martine Moïse, 47, was placed under the protection of security agents.

A country in chaos

The circumstances of the tragedy are still unclear ten days after the assassination of her husband, which aggravated the chaos in this very poor country of the Antilles, where armed gangs reign violence. Haitian police arrested around 20 people, including several former Colombian soldiers accused of having been part of the commando that came to kill Jovenel Moïse.

Suspicion aroused suspicion of the apparent ease with which the attackers managed to kill him, four officials of his security team were jailed and 24 officers were given precautionary measures. The director general of the national police of Haiti, Léon Charles, assured Friday to work with international investigators, in particular agents of the American federal police force to identify the instigators of the assassination.