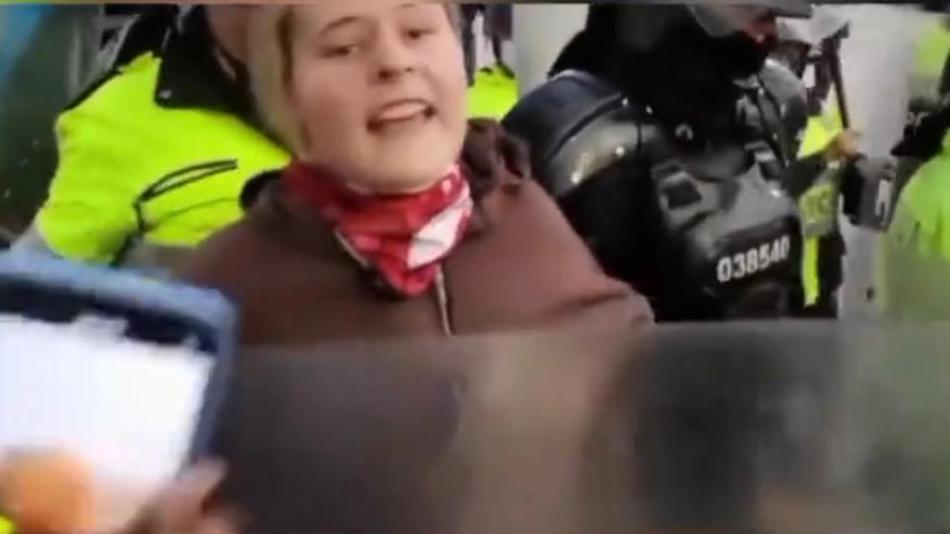 María E. Giulianelli: what will happen to an American detained in riots – Investigative Unit

Last night, the authorities contacted both members of the United States Embassy in Bogotá and directors of the University of Los Andes to notify them of a capture in the midst of the excesses and disturbances that took place in the capital.

(You may be interested in: María Elizabeth Giulianelli, the young American arrested in protests)

EL TIEMPO was able to establish that they were being notified that one of the three women captured throwing blunt elements against the Police is a student of that prestigious university and a US citizen.

This newspaper investigated and established that she was identified as María Elizabeth Giulanalli, who has entered Colombia as a student for several years. His family is from California, but he lives in Golden, Colorado.

The young woman, 22 years old, who was recorded on security videos participating in the protests, spent the night at the Puente Aranda URI.

(On the topic: What has not yet been revealed about the movements of the captured Russian)

“There are the images that he was in the group that confronted the Police and that he threw forceful elements at them“, the Secretary of Security of Bogotá, Aníbal Fernández de Soto, told EL TIEMPO.

And he added that the fate of the young woman must be defined by the competent authorities (Prosecutor’s Office and Police) and Migration Colombia.

Protesters clashed with Esmad near the National University.

There are the images that he was in the group that confronted the Police and that threw forceful elements at them: Aníbal Fernández de Soto, Secretary of Security of Bogotá.

This newspaper established that the deportation or expulsion of the student will only be evaluated if it is not processed in Colombia and They set her free, and after a report supported by the National Police on the possible participation in excesses or attacks on the public force.

(Also: Who is the colonel who was allegedly offered a bribe by a captured Russian?)

The United States consulate in Colombia is already attending to the case.

Sergei Vagin, did not accept charges. This Monday the imputation hearing continues.

Just a month ago EL TIEMPO exclusively revealed photos and videos of the participation of the Russian citizen Sergei Vagin in the demonstrations of years ago that also ended in excesses in Bogotá.

(Also: What is behind the dismembered that are appearing in Bogotá?)

The Russian was captured for the crimes of aggravated non-consensual transfer of assets, abusive access to a computer system and aggravated conspiracy to commit a crimebut there is evidence that he recruited Venezuelans and young Colombians to move juicy sums between Moscow, Bogotá and Medellín.