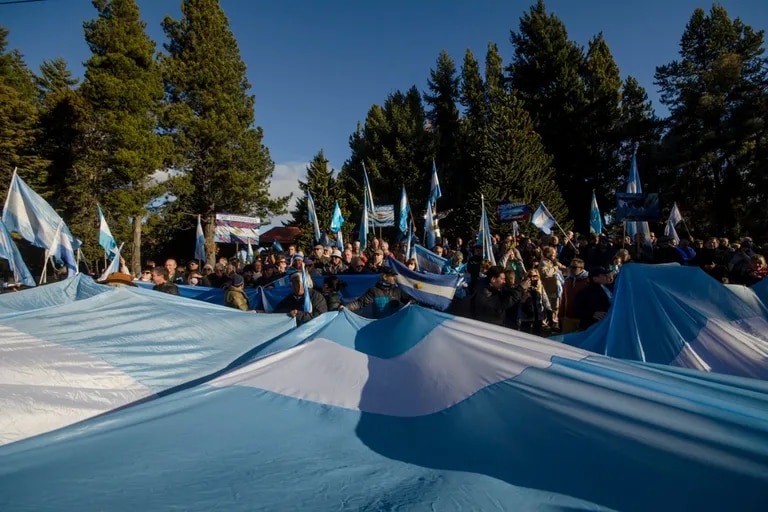 SAN CARLOS DE BARILOCHE.- More than 50 cars participated this Sunday in the caravan that left at 3:30 p.m. from the cave of the Virgen de las Nieves, on the route that leads to Cerro Catedral, and headed to the Mountain Military School. There, some 500 personas -according to estimations of the organizers and traffic agents- gathered to hug symbolically to the institution of the Army, which faces different territorial claims of Mapuche communities.

Coinciding with the Argentine Army Day, the embrace of the Escuela Militar de Montaña was organized by Neighbors Self-Summoned by the Homeland and Malvinas War Veterans, and had the slogan “Argentines standing up defending our national sovereignty in Bariloche”. Parents with young children, married couples, single men and groups of women participated in the concentration despite the fact that the thermometer was just a few degrees above zero.

Most of them carried an Argentine flag and there were also signs that read “Without Justice there is terrorism” and “Argentina or Komunism”. At the entrance to the military school, on Bustillo Avenue and 9.5 kilometers from the city center, some war veterans. After singing the National Anthem and Aurora, the demonstrators listened to the words of one of the organizers.

“This hug is a symbol of union. It is not a mere whim to defend the lands that the Army guards. This is landscape wealth that should not fall into the hands of individuals. Its use should concern us all”, the spokeswoman pointed out. There was no mention of any litigation or Mapuche communities in particular.

The main speech also mentioned the project of the central Parkproposed in 2014 by the current governor Arabela Carreras, who was a legislator at the time. It is a property of around 3,600 hectares that are located in the center-west area of ​​Bariloche and are administered by the Ministry of Defense of the Nation. During the embrace of the Escuela Militar de Montaña, they indicated that this park would allow the creation of a green lung “for the enjoyment of all”.

In this sense, they were against the “outrages, economic interests and the destruction of heritage” and called for paying “special attention” and taking “cautions to safeguard” these lands. “We embrace this place for what it represents. The various open lawsuits take place on state land and, therefore, on everyone’s land. Enough of corruption, enough of usurpation, of enrichment of politicians. For a single flag. We are making history, defending what is ours”, they concluded.

In a video that he recorded in support of the hug and that was part of the call in recent days, former Lieutenant Colonel Aldo Rico stated: “For us war veterans, the homeland is a challenge, not a business. For this reason, this decision of the citizens of Bariloche to stand up and gather to defend one of the most important institutions of the Homeland is really commendable”.

In addition to dozens of national insignia, an Argentine flag of about 60 meters long was part of the embrace of the Mountain Military School. Some motorists honked their horns in approval as they passed on Bustillo Avenue. Others were puzzled by the unusual traffic for a Sunday.

“We have to find a way to channel territorial claims. There are many that are legitimate, but you have to find a way to respond to them without creating a chain effect, ”he told THE NATION Diego Frutospresident of the Villa Mascardi Neighborhood Board, who was very happy with the call this Sunday in Bariloche.