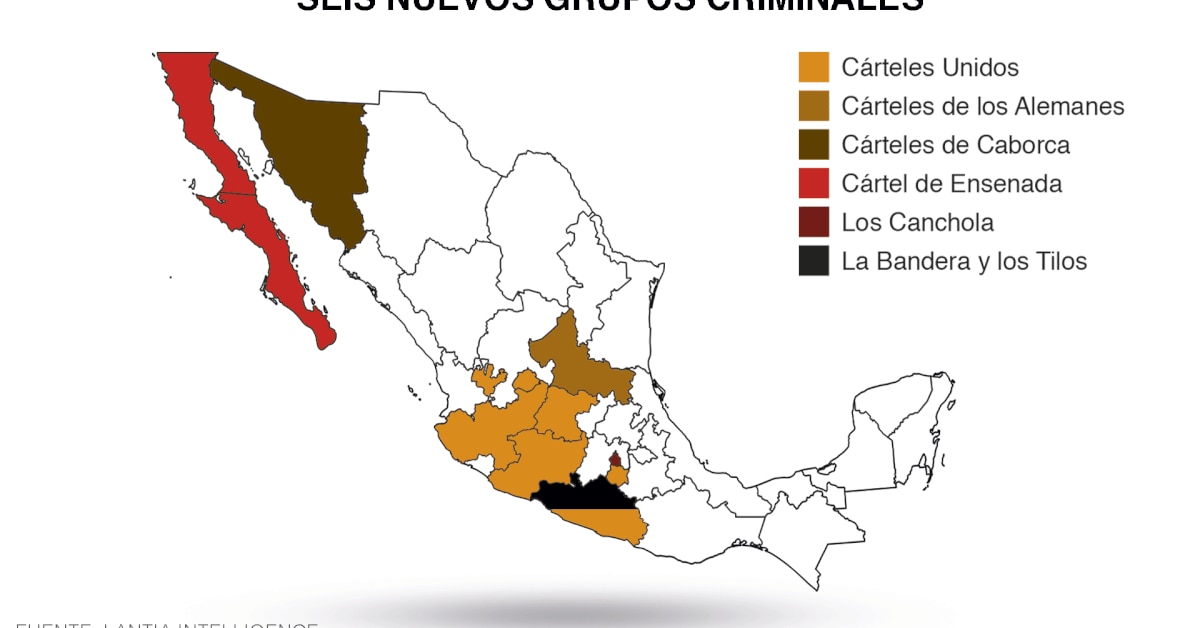 An analysis by Lantia Consultores on the criminal groups that emerged during López Obrador’s administration (Map: Infobae México)

While the Mexican government boasts that there are only three drug cartels in the country, different security reports warn that only so far during the administration of Andrés Manuel López Obrador, six criminal organizations have emerged.

The consultancy specialized in security Lantia Intelligence, ensures that from December 2018 to this year the criminal group United cartels managed to establish itself in several states of the country.

This cartel, whose objective is to end Nemesio Oseguera Cervantes, the Mencho, leader of the Jalisco New Generation Cartel (CJNG), has a presence in the entities of Michoacán, Guanajuato, Guerrero, Morelos, Aguascalientes, and Jalisco.

Reports indicate that the United Cartels is a kind of federation Sui generis from the remains of old groups such as Los Viagras, Caballeros Templarios, Los Botos and Los Blancos de Troya.

In recent months, said criminal organization has had a fight with the CJNG, in Hot land.

On San Luis Potosi There was also a fundamental change in the levels of violence, generated mainly by the eruption of the criminal cell identified as Cartel of the Germans.

Last year, subjects dressed in black and with ski masks identified themselves through a video as members of the Cartel de los Alemanes, which operates in San Luis Potosí (Photo: @vigilantehuaste / Twitter – screenshot.)

In the northern state of Sonora A faction led by the legendary kingpin has moved Rafael Caro Quintero, the Narco de Narcos. According to the authorities, the so-called Caborca ​​Cartel it aims to control the region, to move drugs and extract the resources of the population.

A narcomanta of the Caborca ​​Cartel (Photo: Special)

For the beleaguered residents of Guerrero, whose panorama could not be darker, two criminal groups emerged after the fragmentation of the Guerreros Unidos cartel. Is about The flag Y Los Tilos.

In Mexico City, the new crime map suggests the presence of a criminal gang identified as The Canchola, which operated under the protection of the leader of the Union Tepito, Roberto Esparza, the Betito.

Criminal geography depends on the eyes of the investigator. Last April, Jorge Roa, a security and violence analyst, counted at least 12 criminal organizations. In addition to the aforementioned cartels, Roa suggested the entrenchment of the Tobacco Cartel, with presence in Sonora, Coahuila, Sinaloa, Nayarit, Jalisco, Michoacán, Tabasco and Veracruz; New Zeta blood, in Puebla, Tlaxcala, Veracruz and San Luis Potosí; Ghost Cartel, in Guerrero; Arrows MZ, which operates in Zacatecas; Zicuirán New Generation Cartel; the Commander R10’s group, in the State of Mexico; Los Correa cartel, in Michoacan; The Russians, Guerrero; New Flag People; The Moreno, in Baja California; and the Black Handkerchief group in Michoacan.

The Mexican government denies asking for control of any part of the country. But organized crime Today it is penetrating the nation more and more deeply, infiltrating communities, police forces and municipalities.

X-ray of drug trafficking in Mexico: this is how the 148 criminal groups operating in the country are distributed