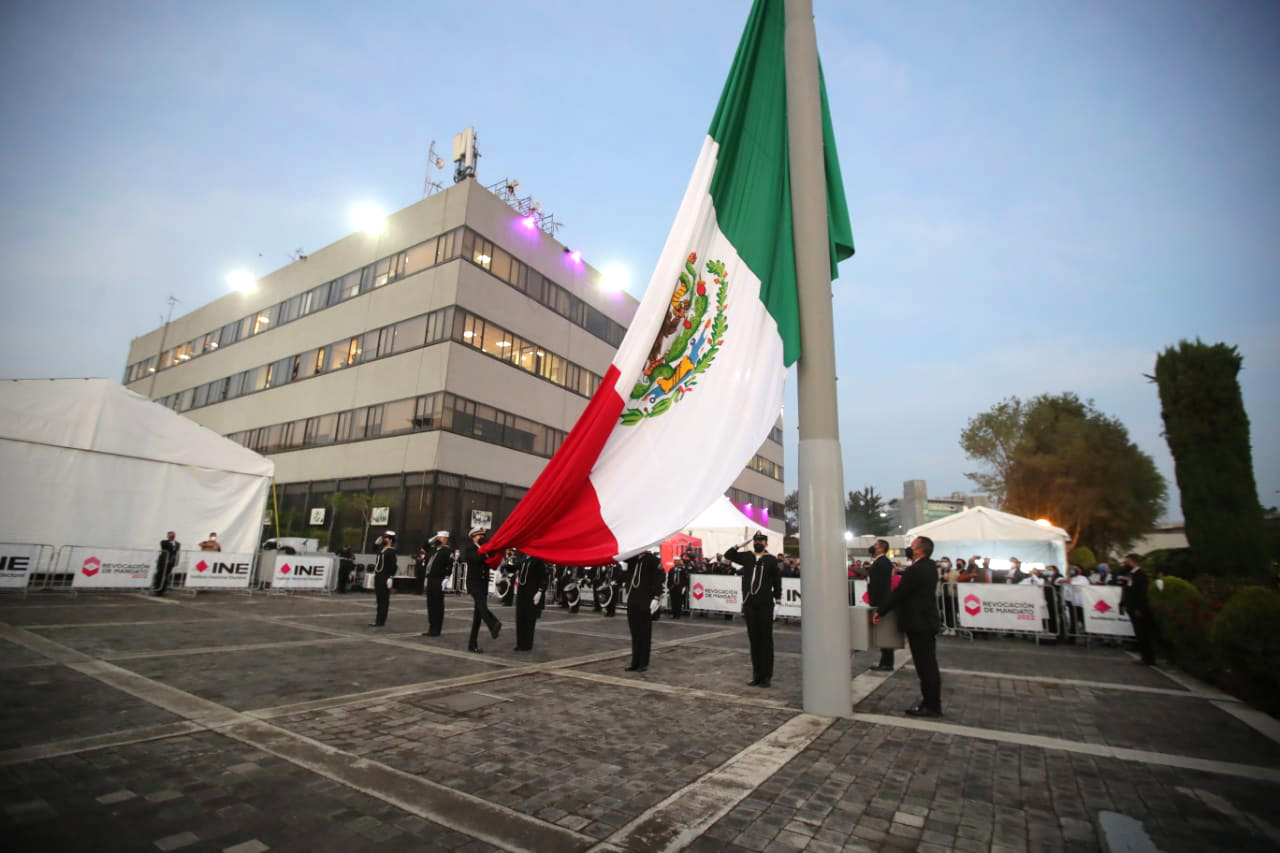 The National Electoral Institute (INE) carried out the civic ceremony of honors to the flag on the occasion of the beginning of the Revocation Consultation of the Mandate of the President of the Republic elected for the constitutional period 2018-2024, due to loss of confidence.

On the esplanade of the central offices of the INE, the President Councilor, Lorenzo Córdova Vianello, assured that the first exercise to revoke the mandate of the person who holds the Presidency of the Republic has so far been an organizational success, for which he called the actors politicians to respect the law and citizens to denounce any act that tarnishes the democratic exercise that is being carried out for the first time in the country.

“From the INE I make a call to the political actors, both those who have promoted the Revocation of the Mandate and those who did not want this exercise to be carried out. I ask all of you to respect the laws, not to intervene unduly in the decision of citizens to exercise or not the constitutional right, and much less to exercise it freely.

He asked the citizens to be attentive so that the recall day is carried out with legality and impartiality, for which he requested to document and denounce any electoral crime to enforce the rule of law.

See also  Covid-19: in Antarctica, an isolated Belgian base is not immune to the explosion of cases

“In the information age, cheats and cheats in electoral matters will always be discovered,” he warned.

In the presence of counselors, counselors, the Executive Secretary, magistrates, magistrates, representatives of political parties and the Legislative Power, the President Magistrate of the Electoral Court of the Judicial Power of the Federation (TEPJF), as well as the president of the Board of Directors of the National College of the Mexican Notary Public and the president of the Association of Notaries of Mexico City, Córdova Vianello stressed that the trust that society has in the electoral authorities is not a coincidence.

“Despite the intense smear campaign that has been launched against the country’s electoral authorities, Mexican society, side by side with its INE, once again appropriated this unprecedented exercise of citizen participation,” he said.

He added that “the repeated attempts to boycott the work of this electoral authority to prevent us from complying with our constitutional mandate generated the opposite effect, the citizenry once again accepted to participate in the integration of the polling station boards, even more quickly than in other elective processes and with percentages that we had not seen before”.

A few minutes before the polling stations are installed, the President of the INE thanked the citizens for their democratic vocation and highlighted the importance of the civic ceremony led by the National Electoral Institute and the Electoral Tribunal of the Judicial Power of the Federation, because “ we are institutions that believe in the institutionality that gives life to the Republic and that supports the division of powers and the system of checks and balances of our democracy”.

See also  Daily Mail: Mysterious hepatitis infections in the world have increased to 650 cases, without knowing the cause

The civic ceremony of honors to the flag was attended by the War Band and Escort of the General Headquarters of the High Command of the Secretary of the Navy of Mexico.