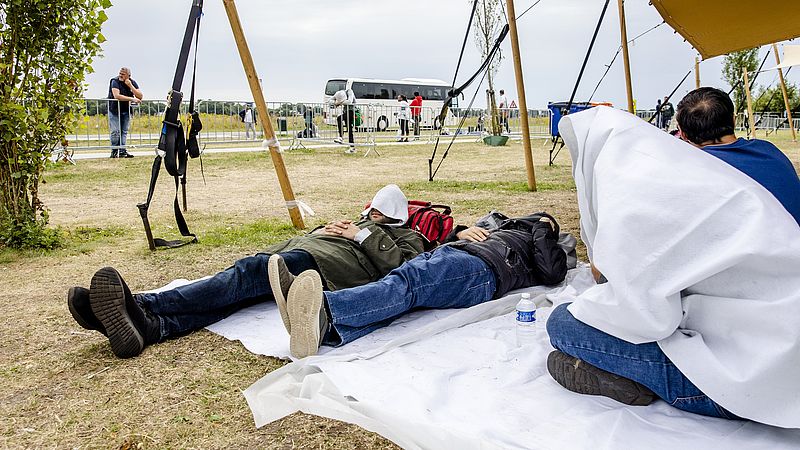 Majority for temporary asylum stop: ‘First order in the chaos, then they are welcome again’

Most people think a temporary asylum stop is a good idea (69 percent). This is apparent from research by EenVandaag about the asylum crisis. Requiring municipalities by law to accept asylum seekers goes too far for the largest group (55 percent).

The reception of asylum seekers in the Netherlands has been stalled for some time. AToday explained vvarious plans to do something about this. The majority (61 percent) is in principle in favor of receiving war refugees. This figure has been stable for years and the current crisis does not change that. But for most plans to get out of the current crisis, there is no support. With the exception of a temporary asylum stop. The question is whether this is legally feasible.

‘The Netherlands is too full’

The ruling party VVD and opposition parties JA21 and PVV argue for a temporary asylum stop. Applications from asylum seekers will then temporarily no longer be processed. State Secretary Eric van der Burg (Asylum and Migration) suspects that such a stop is in conflict with the Aliens Act. He has promised to investigate this.

Seven out of ten respondents are in favor of such a temporary stop. They can be found en masse within the supporters of PVV (98 percent), Forum for Democracy (96 percent), JA21 (96 percent), VVD (83 percent), CDA (80 percent) and among non-voters (76 percent). Some of these are people who have felt for some time that the Netherlands is too full and that we should limit the influx of asylum seekers in any case.

‘First order in the chaos’

But there is also support for this plan among people who are fundamentally in favor of receiving war refugees in the Netherlands (53 percent). This is also reflected in voters of ChristenUnie (61 percent), Party for the Animals (52 percent) and PvdA (45 percent). They often feel that we have ended up in an emergency that calls for sharp measures until we get our affairs in order.

“We cannot do this to asylum seekers. If we cannot accept them acceptably, there is no other option than to put a stop to it,” someone says. Another: “First order in the chaos and then a better policy. Then they are welcome again.” They hope that other countries can handle a little more influx until then.

No support for mandatory reception of municipalities

The cabinet is now looking at other ways to reduce the problems with reception. For example, it is preparing a law that will oblige municipalities to accept and guide ‘promising’ asylum seekers.

Now some municipalities receive many asylum seekers, others few or none. Some only want to take in Ukrainians. More than a third of the respondents are in favor of such an obligation (37 percent).

“It obviously doesn’t work if it has to be done on a voluntary basis,” says one proponent. “For example, refugees never get a decent shelter.” Many participants comment that it is fairest if municipalities are allocated asylum seekers in proportion to the number of inhabitants.

A small majority (55 percent) is against such a legal obligation. In their view, the central government has caused the current problems and you cannot force municipalities to solve them. Moreover, they believe that municipalities are already making enough effort to help with reception and housing.

See also  The “pluses” and “minuses”: how to decide? - Bluewin

Measures and plans to combat the asylum crisis

Almost half (48 percent) are against. The fact that the municipal council is not thrilled because it already receives about a thousand refugees in an asylum seekers’ center weighs heavily. Others emphasize that this only keeps the flow of asylum applications going: “It is better to turn off the tap than to look for a second bucket”, says one participant.

No priority on the housing market

There is almost no support for the action by the municipality of Utrecht to temporarily give priority to a house for refugees who are allowed to stay in the Netherlands. Nearly all social rental homes will go to these status holders in the next 6 weeks. A bad thing, according to eight out of ten respondents (80 percent).

They find this very unfair compared to people who have been on a waiting list for years. The measure evokes a lot of emotion: “Unacceptable. Not to be sold in these times of housing shortage. My daughter and her family have been waiting for a house in Utrecht for 8 years. I can’t explain this.”

All in all, the current reception crisis is causing a great deal of concern among respondents. Three quarters (78 percent) say they are concerned. On the one hand, they are about the degrading conditions in the registration center ter Apel, where people sleep outside and on chairs.

See also  Fixed term: How much is earned by investing $ 100,000 after the new rise in the interest rate?

On the other hand, there are problems in the Netherlands. The main concerns are the pressure on the already tight housing market. The use of our social facilities and cultural differences are also mentioned.


Joyce Boverhuis presents the results of the research on the asylum crisis.

The survey was held on 1 and 2 August 2022. 27,080 members of the EenVandaag Opiniepanel took part in the survey. After weighting, the study is representative for six variables, namely: age, gender, education, marital status, distribution across the country and political preference measured after the 2021 elections to the House of Representatives. The Opinion Panel consists of 80,000 members.