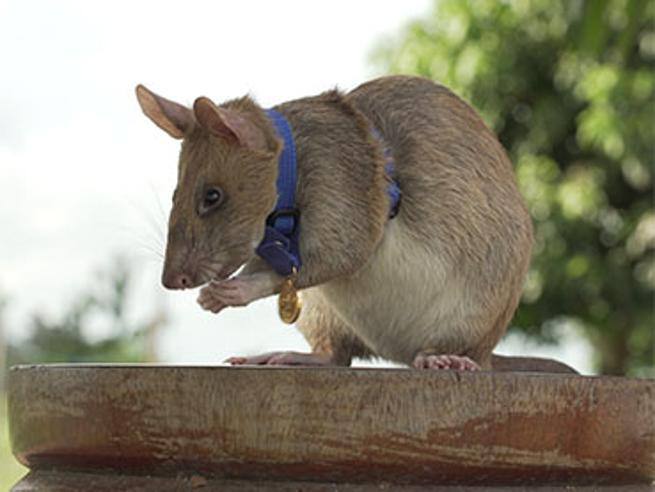 He was also given a medal and the title of HeroRat for finding over a hundred mines and other devices in his career.

Cambodia in mourning for the death of Magawa, the rodent who was able with his sense of smell to identify the presence of explosives. In the course of his five-year “career”, he had discovered over one hundred anti-personnel mines and other explosives in a land battered by this type of bomb which still causes dozens of victims and hundreds of injured every year.

The name doesn’t do it justice

Magawa was a giant African rat (Crycetomis gambianus), was eight years old and despite the mouse-like appearance and hamster name it was neither: it belonged to a distinct family of rodents endemic to Africa. With hamsters it shares the cheek pockets in which it accumulates food, especially fruits and palm bark. They are social animals that live in colonies and can be domesticated enough to become companion animals.

In Tanzania he was instructed to search for explosives by the Belgian organization Apopo. After a year he was sent to Cambodia where his nose helped deminers to clear an area of ​​141,000 square meters infested with anti-personnel mines, an area the size of twenty football fields. It weighed 1.2 kilos and was 70 centimeters long (including the tail) but it was small and light enough and even if it passed over a mine it did not trigger the explosion mechanism. In 20 minutes he could identify the presence of mines on an area the size of a tennis court, while a person with a metal detector would have taken one to four days, depending on his experience in this area.

In 2020, Magawa was awarded the PDSA Gold Medal, the highest British honor for animals that have contributed with their efforts to save or improve the existence of humans. Magawa, who could also boast the title of HeroRAT, was the first mouse to receive the medal in 77 years of history. He had “retired” last June because he had slowed down due to old age. The Apopo association announced that until the last few days he had continued to play and show interest, then since last week he had fallen into a sort of apathy. “He left peacefully,” they reported. Hi Mouse Hero.