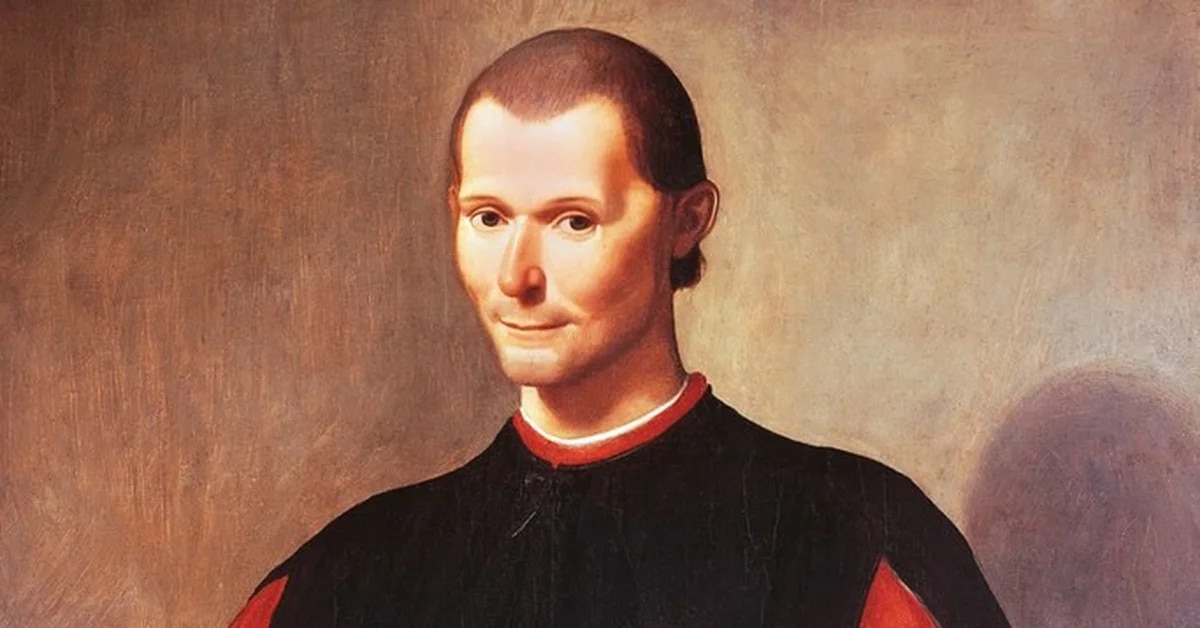 Machiavelli, the thinker who warned about corruption, the sectarianism of politicians and authoritarianism

You don’t have to go around too much. Almost five hundred years later, there are those who maintain that in order to solve the crises faced by democracies in the world, it is necessary to read Niccolò Machiavelliwhose work offers several keys for leaders, winks for citizens and calls for attention to politicians who dream of excessive power. His preaching was not directed at tyrants on how to deal with unlimited power, but instead sought to open the eyes of citizens to what they were capable of doing if they were not limited.

His thoughts written in 1500, in which he sounded the alert about the consequences of the bad decisions of the rulers and corrupt institutions, would today make more than one politician settle nervously, time and time again, in his chair in the power offices. It is true that his views at the time were aimed at his Florentine compatriots, but his insightful observations may well apply to other settings, still current.

Machiavelli, who has been defined as a symbol of the Renaissance, impious, immoral author, referent of the modern conception of the State, patriot and republican, was he really Machiavellian?

The son of a family of some renown in Florence, he was born on May 3, 1469. His father Bernardo he was a lawyer who had no fortune, but had relatives who had held important positions in Florence. Nicholas he was a young man of medium height, thin, with lively eyes, dark hair, who used to always have a tight mouth.

He was a great reader of history, which he was interested in not as a hobby but to take its teachings and why not see how to apply them in the future. In his early training he nurtured himself by reading ancient thinkers, such as Cicero, Thucydides, Titus Livy, Polybius y Plutarch.

The front of his house, a few kilometers south of the city of Florence. It can still be visited.

His first position in the Florentine government was administrative. He was concerned to warn of the dangers that threatened democracy and what were the ways to avoid them. In 1506 he organized a Florentine military reform, arming a national militia and dispensing with mercenaries, who changed command to the highest bidder. His work “Dialogues on the Art of War” is a theoretical anticipation of modern national armies.

When in 1512 the Florentine troops were defeated by the Spanish army in the service of the Pope Julius II his name appeared on a list of conspirators. Without having been really engaged – yes his friends Piero Boscoli y Agostino Capponi– was arrested and tortured. “I have been very close to death, I have endured all the pain, and God and my conscience have saved me”.

Machiavelli was a defender of democracy and what some saw in his writings as ideas and tools that he gave to tyrants were actually calls for attention to unmask him in front of society. His phrase “educate the prince” actually meant “educate the people.”

The city of Florence, as it was in the time of Machiavelli.

Florence was then a republic with a great presence of popular decisions that always pushed with the disproportionate influence of the Medici, who bent over backwards to handle it all. Having been an official in his city and one of the victims of the persecutions of this powerful family, inspired him to write The Prince, filling them with examples of men who had no scruples to come to power, perhaps starting with a certain John de’ Mediciwho had become the Pope Leo X.

when he took over Leo X, was soon arrested again and confined to the family farm in San’t Andrea in Percussina, in the municipality of San Casciano in Val di Pesa, about fifteen kilometers south of his native Florence. He was accompanied by his wife Weather in Marietta Corsinitheir four children and their extramarital adventures.

Cover of his best known book, “The Prince”. Machiavelli did not see it published, it was already known five years after his death.

For “The Prince”, he was inspired by observing the people who went to the inn “L’ Albergaccio” (The bad inn) next to his house, where he went every night after dinner, dressed in ordinary clothes. He sat at a table in the back, by the fireplace. “In the usual company of the innkeeper, a butcher, a mill boy and two peons from the quarries, I get all day with them playing cricca or tric-trac” (a game of dice). Cane was prepared, cooked in wine, black cabbage and wild fennel.

Also, at this time, it was when he wrote “Discourses on the first decades of Tito Livio”, some comedies such as “Clizia” and “La Mandrágora”, stories that revolve around conflicts between a young man and an old man for the favors of a girl . “The Prince” would only be published five years after his death.

Throughout history, the work of Machiavelli It didn’t get a good press. He has been pointed out as the forerunner of political and moral perversion, to the point that in Great Britain the Prince of Darkness was called “Old Nick” (viejo Nicholas) for him. He ignored his condition as a humanist and a man of the Renaissance, formed on the basis of a thorough reading of classical authors. It was from these that Machiavelli argued that they had to be taken as a starting point for the teaching and explanation of politics.

Machiavelli’s tomb, in the church of Santa Croce.

But Machiavelli warned about democratic crises, and attributed them to irreconcilable sectarianism among politicians, which went beyond simple discrepancies, and to deep inequalities that did nothing but destroy citizen confidence. They were made five centuries ago but they look like observations made today.

The thinker stressed that part of the blame for tyrants and authoritarianism lies with the people themselves, who see these leaders as saviors.

With a realistic vision, he separated morality from politics and affirmed that the latter traveled along its own paths, independently of the economy and society. He found that the exercise of power used to deviate from the paths of loyalty and ethics.

He admitted that politics had rules that could be amoral. “I have found it appropriate to represent things as they really are in reality, rather than as they are imagined,” he explained. The most famous phrase that “the end justifies the means” was not written by himand arose from an interpretation that was made on an annotation made by Napoleon Bonaparte. Others attribute it to a German Jesuit theologian Hermann Busenbaum: “When the end is lawful, the means are also lawful”, according to what is read in his manual of moral theology of 1650. Machiavelli held that men in power should be judged by the results achieved, and if these are not achieved, the means used to achieve them should be forgiven..

Great observer of the individual wrote what it was like to actually be the exercise of power and not what it should be. Because The Prince is a kind of instruction manual on how to exercise power efficiently.

He planned for Italy to turn it into a unitary state, but in his time it was a country still very much identified with the medieval and none of the Italian states of that time had enough power to undertake such an undertaking. That dream would just come true Camillo BensoCount of Cavour, Giuseppe Mazzini y Giuseppe Garibaldi three hundred years later.

scholars of Machiavelli affirm that for the writing of “The Prince” he was inspired by the figure of the skillful César Borgianatural son of the cardinal Rodrigo Borgia. His skills as a soldier and his constant pursuit of power made him admired and hated with the same intensity. For Machiavelliwas a kind of model of the prince to govern. “The fear of the prince is maintained by a fear of punishment that never leaves us”, wrote. However, she dedicated the book to the Mediciin an attempt to ingratiate himself with them, which he achieved since Cardinal Giulio de’ Medicionce become the Pope Clement VII, used it for various diplomatic missions. Being successful in dealing with him, he gave her more work and commissioned her to write two plays. They were The Art of War (the only one published during Machiavelli’s lifetime, in 1521) and Florentine Histories, which he finished in 1525.

He alienated the church by highlighting its decline and the need for reform. “Being religious was one of the qualities that the prince should appear to have,” he remarked, insisting that he was not anticlerical. His ideas were close to Jesus Christ and not the pope being the true head of the church. The Prince would become part of the index of books prohibited by the church. “This book has been written by the finger of the devil”sentenced the cardinal Reginald PoleArchbishop of Canterbury.

The thesis repeated for years that Machiavelli was a supporter of the dictatorship collapses just by reading his work, which reflects him as a republican. He had the courage to speak, in his time, about such issues as virtue, fortune, the common good and war, as well as respect for justice and that a democracy was much better than an authoritarian government.

Machiavelli was a defender of democracy, of respect for justice.

When the armies of Carlos Vin their confrontation with the pope, French and Turks sacked Rome in 1527 and besieged Clement VIIa new popular movement turned the tables in favor of the republic in Florence and the old friends and allies of Machiavelli they walked away from him and turned their backs on him. He suddenly fell ill and died on June 21, 1527. His remains remained unknown for two and a half centuries until, thanks to a popular subscription at the end of the 18th century, a magnificent mausoleum was built in the church of Santa Croce. He rests close to other illustrious Italians, such as Galileo Galilei y Miguel Angel Buonarotti. His epitaph says it all: “No amount of praise could express the greatness of this name: Niccolò Machiavelli. He died in 1527″. On the fourth centenary of his birth, a plaque was placed in front of his house: “To Niccolò Machiavelli. The one who inspired and advocated the liberation of Italy by writing his immortal works on the art of maintaining and defending the fatherland with national troops”.

The house of San’t Andrea in Percussina is a tourist attraction that keeps its spirit alive, the great misunderstanding of political history that wrote that the “The true way to get to paradise is to learn the way to hell in order to avoid it.”

Belgrano’s death: the doctors who treated him, a revealing autopsy and the teeth that embarrassed two ministers
The execution of General Valle: the farewell to his daughter, jokes to his confessor and the fatal premonition to Aramburu