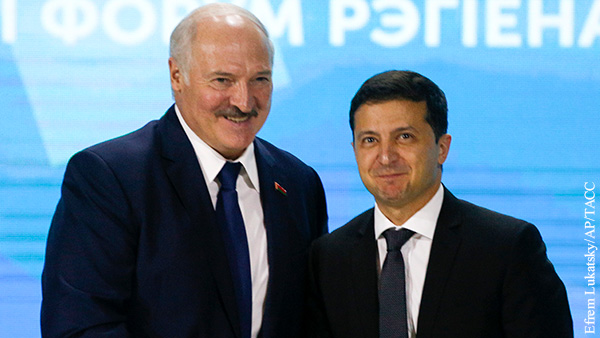 After a significant degradation of relations between Belarus and Ukraine and the introduction of economic restrictions by the countries against each other, Minsk announced its readiness to sit down at the negotiating table with Kiev for the sake of returning to the “partnership format”. Why is Lukashenko extending a hand of friendship to Zelensky and is Ukraine ready to sacrifice “European solidarity” for the sake of beneficial relations with Belarus?

The Belarusian authorities are ready at any time to sit down at the negotiating table with Ukraine and return to the partnership format that existed before the current aggravation of relations between the two countries. This statement was made by the head of the government of Belarus Roman Golovchenko on Saturday air of the Belarus-TV channel. “But the ball is now on Ukrainian territory,” the prime minister added. The conciliatory statement of the head of the Belarusian Cabinet of Ministers sounded against the backdrop of a clear and ever deepening deterioration in relations between Minsk and Kiev.

At the suggestion of President Volodymyr Zelensky, focusing on Western partners, Kiev actively joined the campaign against the Belarusian authorities back in August 2020. Another deterioration occurred after the forced landing of the plane of the Irish company Ryanair at the Minsk airport and the arrest of the Belarusian oppositionist Roman Protasevich, who was on board. The position of Kiev can be judged by the speech on Sunday by the ex-president, the representative of Ukraine in the Trilateral Contact Group on Donbass, Leonid Kravchuk. He, following NATO Secretary General Jens Stoltenberg, said that the Belarusian authorities had landed the plane with Protasevich at the behest from Moscow.

Three days after the incident, Ukraine stopped air traffic with Belarus. Ukrainian airlines were banned from flying in Belarusian airspace. What happened next took on the character of a real trade war. At the end of May, Belarus introduced an onerous individual licensing regime for Ukrainian exporters. In addition, the supply of oil products to Ukraine from Belarusian refineries, which is used, among other things, by the Ukrainian army, turned out to be in question.

A week ago, Belarusian President Alexander Lukashenko said: Minsk and Moscow are working on the issue of opening flights to Crimea (which Belarus does not recognize as part of Russia). Crimea was the first to offer Belarus to open direct flights, but before Lukashenko’s announcement, Belavia refused until “the political recognition of Crimea as part of Russia.”

See also  Euro 2020: the king of the Netherlands commits a new blunder that goes badly in times of coronavirus

It got to the point that the Verkhovna Rada is ready to recognize Lukashenko as a security threat, and Zelensky publicly shared fears that Belarus and Russia would create a real union state that would threaten both Ukraine and the West.

And now the Belarusian Prime Minister Golovchenko reminds that there have been frictions between Minsk and Kiev more than once, but the two neighboring republics removed the issues, made mutual concessions and continued to trade further. “We have never taken hostile actions towards Ukraine,” the head of the Cabinet reminded. “Moreover, in difficult situations, we supported Ukraine and took a very balanced position even when it was not very easy for us.” Golovchenko stressed that Minsk is now forced to respond to the unfriendly actions of its neighbors, and expressed regret that Ukraine is acting so harshly.

Indeed, even earlier, Kiev – showing European or Euro-Atlantic solidarity – was the first to start a quarrel with its neighbor. As the newspaper VZGLYAD previously noted, Ukraine began to introduce anti-dumping duties and special duties on Belarusian products at the beginning of last year, long before Western countries took the same measures (the anti-Belarusian campaign was tied to the post-election crisis of August-September 2020. and to the speeches of the Belarusian opposition). An additional reason for the attacks on the neighbor was the failure of the operation to capture the “33 Wagnerites” in Minsk – the detained Russians, as you know, were returned to their homeland instead of being extradited to Kiev. In October last year, instead of the next Ukrainian-Belarusian forum of regions, Kiev joined the EU sanctions against Minsk.

At the same time, the interdependence of the two former Soviet republics is obvious. Ukraine remains the second recipient of Belarusian exports after Russia. According to last year’s data, Belarus supplied goods worth $ 2.87 billion to Ukraine, while Ukraine supplied much less to its northern neighbor – exports amounted to about $ 1.33 billion.

Belarus is the main sales market for some Ukrainian building materials – for example, up to 70% of the supplies of Ukrainian bricks go there. On the other hand, Ukraine is extremely interested in the supply not only of Belarusian gasoline and other oil products (for example, bitumen), but also in the purchase of cheap Belarusian electricity, agricultural machinery, etc. Finally, it is no secret that part of Ukrainian exports continued to go to Russia precisely through Belarus.

“In a situation where it is critically important for Belarus to preserve the export of oil products and especially the export of electricity after the launch of the BelNPP, Ukraine’s refusal is a serious blow to the implementation of investment plans, to ensure energy security,” said Yaroslav Romanchuk, a Belarusian economist, head of the Mises Scientific and Practical Center, to VZGLYAD newspaper. –

Although Ukraine has joined the sanctions on aviation, although Belarus has imposed an embargo on goods, the question is fundamentally important: how long can countries be in such a regime? ”

According to the interlocutor, without the speedy normalization of relations with Kiev, the economy of Belarus “faces a recession, the population – impoverishment, many enterprises – bankruptcy.” “We need to talk with both the European Union and Ukraine, but within the framework of the Eurasian Economic Union, remove all trade barriers that exist,” Romanchuk believes.

According to the Belarusian expert, the government of the republic proceeds from the assumption that the country has no enemies, but has trade interests. “There were too many emotions, too much negativity was thrown out after the incident with the plane. In this situation, it would be important to return to the regime when Belarus offered itself as a negotiating platform for Russia, Ukraine and the EU, ”Romanchuk believes. He recalled that the Ryanair incident in Moscow was called an internal affair of Belarus. “Belarus is not China, not Russia with its domestic market and domestic production. Therefore, it is categorically unacceptable to behave like it did now, announcing counter-sanctions against the EU and Ukraine, ”says Romanchuk. This, in his opinion, explains the actual proposal of Minsk to revive relations with Kiev.

Should Russia close its airspace for flights of airlines boycotting Belarus?

“I think that we are talking about the restoration of not particularly friendly, but pragmatic relations,” in turn noted the Ukrainian political scientist, director of the Kiev Center for Political Research and Conflictology Mikhail Pogrebinsky. “The problem is that it is very difficult to build friendly relations with the fools (you cannot say otherwise) who now head the Ukrainian government,” the expert added. “But Belarus, obviously, is in the interests of preserving trade relations, restoring flights of Belavia, which made very good money on transit.”

Lukashenko demonstrates his readiness to return relations to the previous level, “despite the Ukrainian marasmus,” Pogrebinsky believes. “But I think Zelenskiy has no way back,” said the Ukrainian political scientist. – Zelensky and his entourage do not recognize Lukashenko as president, they want to be ahead of the rest of the world in terms of sanctions against Belavia and against Belarus as a whole. In this situation, it is very difficult to imagine any sensible move on the part of Ukraine ”.

Obviously, Belarus does not want to appear as the initiator of the deterioration of relations, and the proposal made by Minsk is beneficial from a political, economic and social point of view, said Ruslan Bortnik, director of the Ukrainian Institute of Politics. But there is no need to expect a defrosting of relations and an end to the feud between Minsk and Kiev in the near future, the expert believes.

“From a political point of view, Ukraine today is making every effort to provoke Belarus to take the most tough actions against Ukraine, which would allow the OSCE to raise the issue of transferring the negotiating platform on Donbass from Minsk,” Bortnik complained. Since the problems in relations between neighboring republics are of a purely political and artificial nature, they can only be resolved exclusively politically, the expert noted. “If this crisis can end, then either with a change in the vector in relations between Ukraine and Russia, or with a change in relations between the West and Belarus,” Bortnik summed up.

Watch even more videos on the VZGLYAD YouTube channel