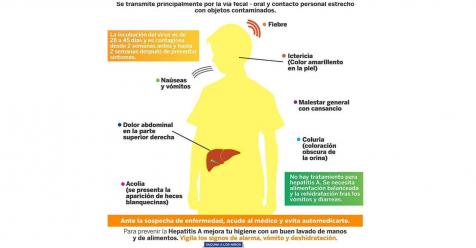 Last friday april 15the World Health Organizationissued an alert for the appearance of an outbreak of acute hepatitis of unknown etiology in it United Kingdom of Great Britain and Northern Ireland in kids previously healthy children in general.

Since then the number of these cases has increased and by 21 at least 169 cases of acute hepatitis of unknown origin had been reported in 12 countries.

And in this sense, the Argentine Society of Pediatrics (SAP) indicated in a document sent to its partners, that although an increase in cases of acute hepatitis has not been observed in the country or in the region in relation to other years, “we must raise awareness of the suspicion of hepatitis before the appearance of compatible cases according to definitions and make the notification through the National Health Surveillance System (SNVS) its epidemiological referent”.

The Doctor Manuel Barthe, referent of the SAP in our provinceassured that the situation worries pediatricians, mainly because the origin is unknown, and said that the recommendations of the national institution are for both professionals and parents.

“This is an alert both for professionals and for the community in general,” Barthe said, asking “to be alert to symptoms.”

At the same time, he reminded parents “to complete their children’s vaccination schedule, since those that prevent hepatitis are included,” in its different manifestations.

“The general symptoms that parents should be aware of in order to consult the doctor immediately are listlessness, pallor, abdominal pain, vomiting, and lack of color in stool and dark urine, there may even be a tendency to sleepiness and weakness,” Dr. Barthe said.

He stressed that although these cases have not yet been seen in our country, “it is a wake-up call and we must be alert.”

These cases would be due to an adenovirus

The pediatrician Angel Muratore explained about the characteristics of this disease, that “normally hepatitis is the inflammation of the hepatic gland, produced by viruses that are classified with letters A, B, C, D and E, and in these new cases, it has been proven that they have not been caused by any of these viruses.”

“In these new cassis, the symptoms are apparently caused by an adenovirus identified with the number 41 and which generally produces respiratory and gastrointestinal symptoms, but it was not considered to be the causal agent of liver inflammation.”

“It mainly affects children under 10 years of age and especially those under two years of age. What is striking about the reported cases is that 10% have required a liver transplant,” added the professional.

Recommendations of the Society of Pediatrics

Among its recommendations, the SAP points out: – Vaccination against hepatitis A and B has notably reduced the circulation of these viruses in our population. However, a reduction in coverage is observed after the Sars-CoV-2 pandemic. It is recommended to start or complete vaccination schedules in accordance with the National Immunization Calendar. – Treatment of hepatitis is supportive, monitoring the development of liver failure, which is rare in the evolution of these patients. – It is important to be cautious and provide serenity and adequate information to families, emphasizing vaccination for hepatitis A and B, maintaining ventilation conditions, hygiene of hands and surfaces.