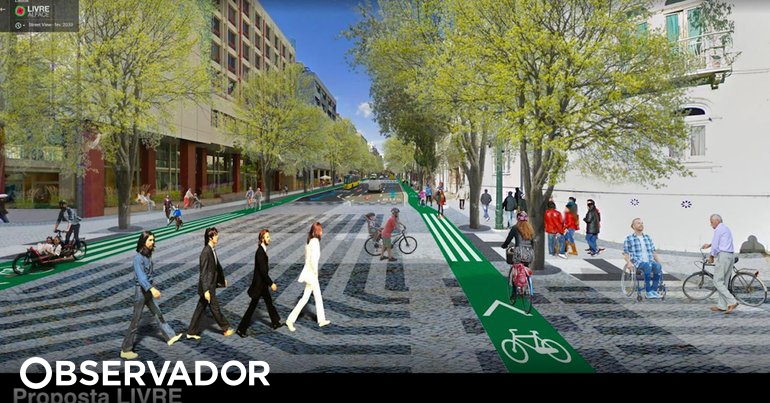 Livre is not satisfied with the solution found by Carlos Moedas and presents an alternative proposal for the controversial Almirante Reis bike path this Wednesday at the council meeting. With “two one-way cycle paths”, one on each side of the sidewalks, the party also wants to “make all public transport stops accessible and without conflicts with the cycle path” and dedicate “an exclusive lane for public transport and emergency vehicles” for traffic to circulate “without blockages”.

As for loading and unloading, they must be located perpendicularly “at all intersections along the avenue”, according to the proposal to which the Observer had access.

It is the objective of the party – which ran in alliance with the PS to the municipality – to ensure that mobility and accessibility in this axis of the city has more security, more active mobility and public transport, is more wooded, with less pollution and decarbonized.

With regard to pedestrian circulation, Livre proposes that the routes are more accessible, comfortable, continuous and safe, with the maintenance of the Portuguese pavement “where there is an ‘Artistic Sidewalk’”. Crosswalks, on the other hand, should be reinforced in number (doubled), elevated and with tactile flooring so that they are accessible to the blind.

Also this Wednesday, an open letter was made public on the Lisbon website for people, also sent to the Observer, from some citizens — among them several members of Livre — who participated in public sessions promoted by the Coins executive on Almirante Reis, where they reject that the solution presented by the mayor is the result of what was said in the sessions.

“It is not possible to say that the solution presented is the result of a true and well-developed participatory process, nor that, as has been widely proclaimed by the CML Executive, ‘that’s what we heard from people’”, reads the letter. public open debate that rejects that participants in public sessions have ever advocated “more roads to ‘drain’ car traffic”.

Os 32 subscribers of the open letter with the title “Almirante Reis, this was not a participatory process” emphasize that “this proposal had already been contemplated in the initial version of the previous Executive for the creation of a cycle lane on the Avenue, but it was never implemented due to the operational and safety problems it presented”.

“Now, incomprehensibly, it is argued that the bike lane should be modified to a solution that is less suitable for more sustainable modes, more harmful to the environment, less effective for emergency vehicles, more dangerous for everyone, and strongly contested by citizens and associations. local authorities, through reasoned opinions that the Executive seems to devalue”, they write asking that “another provisional version not be implemented”, urging the chamber to move “without delay, for an in-depth and technically sustained discussion on the future version of Avenida Almirante Reis et al. Palm Street”.