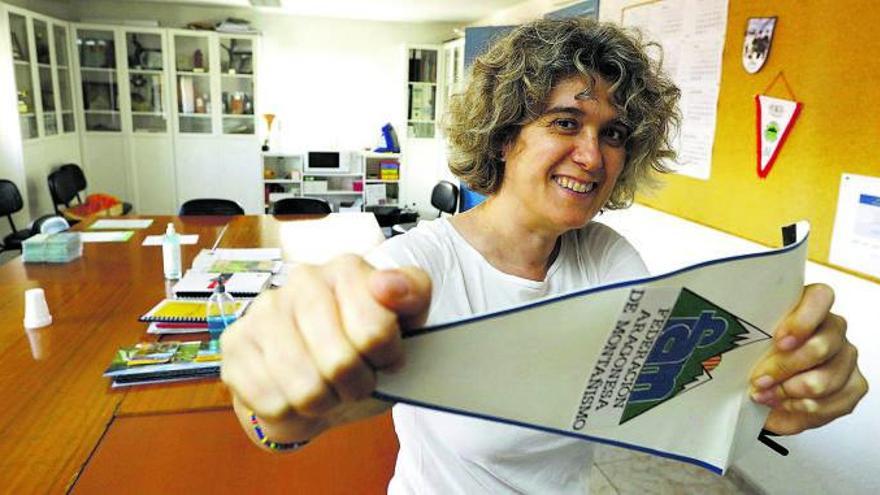 For Carmen Maldonado, the mountain came as a second course. Born in the Oliver neighborhood of Zaragoza (08-13-1972), her parents instilled in her and her brother the need to practice sports, also as a way to escape from the streets. Athletics, making bottom, was his first bet, “but when I got to know the mountain I found my place.” He found it between the summer camps and the program of the Government of Aragon to get to know the rural environment. «For me the mountain is a way of life in all its senses. I could not imagine my life without it, it has given it full meaning “, he says emphatically, recognizing that athletics gave him a physical base that has helped him much later, also in his first steps in mountain skiing, another of his passions.

Federated since 1986, in the Pyrenees Mountain Club, Carmen has been the manager of the Aragonese Mountaineering Federation for ten years and before that she was the technical director of the FAM. Graduated geologist, the faculty was the step to “do mountain more seriously. At the end of the degree, the Federation had the opportunity to work as technicians there. Everything was taking me and I have no longer separated from the mountain, “he recalls with a smile.

In those memories of the past, the Huayna Potosí in Bolivia is in a very prominent place, its personal sports ceiling with 6,090 meters, or its attempt to ascend Vignemale in winter, very young, because «there I really learned what the high mountain and what it could suppose, because until that moment it had done more affordable things. Then I realized that the high mountains demand, that you have to be very aware of what you do and be highly trained to respond well in situations that are almost limits, “she explains. Now, over the years, that passion for the mountains has in his case “a much more recreational level, with my family and friends. My favorite place is Sobrarbe, although I am delighted to have been born Aragonese, we have mountains and wonderful landscapes in the community ».

Carmen feels particularly “proud” to work for a federation that “at no time doubted that I, being a woman, could not do this job. I have seen very few managers in sports federations, in fact I only know one in the Catalan one, “he says, with a smile of satisfaction with which he also announces that he sees himself for a few more years in the position he occupies, in a sports organization that he has in at the moment about 12,000 affiliates. «As a federation I believe that we have managed, in a very collective effort, to reach the entire Aragonese society. With the pandemic, this activity is experiencing a boom, but we have to achieve that it favors us all, that we achieve that people, when going to the mountains, are aware that they have to do it well trained and knowing what it means.

In this sense, he names the Observatory on Mountain Safety of the Government of Aragon and of which the FAM is part and the need for this sport to be understood as a way of life that can offer many things. «We would like to continue growing at the base, especially at the level of hikers, to continue convincing people that the mountains are a way of life that gives you many things, especially in terms of values. When you choose a partner to do an activity, it is a partner with capital letters. Because trust has to be full and mutual, both assuming part of the responsibility with the other “, he asserts.

Remember to finish the great mountaineering tradition that Aragón has always had, a reference not too long ago in Spanish eight-thousand-year-olds, always the aspect that is most reflected in the media, although now «in mountaineering we are very satisfied, we have high-level athletes, but who dedicate themselves to a more technical and committed facet ”, sentence, without leaving for a second that passion that the mountain gives her and that she strives to transmit.