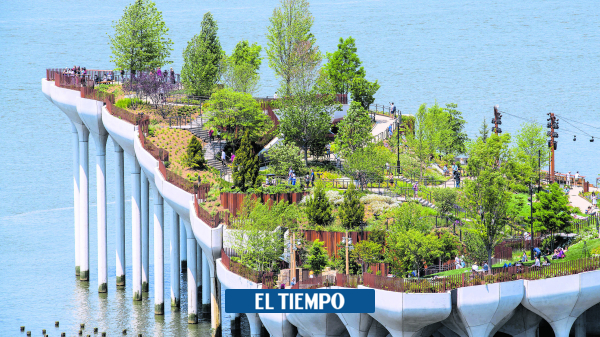 About 132 huge concrete tulips supported by pillars on the banks of the Hudson River levitates Little Island, a new floating public park of 260 million dollars inaugurated two weeks ago in New York to the delight of the population, after more than a year of pandemic.

The original one hectare floating park has many green spaces and unprecedented views of southern Manhattan and New Jersey.

Located on 13th Street, it is an extension of the popular Hudson River Park, which stretches for six kilometers on the west coast of Manhattan.

Its opening coincides with the lifting of most restrictions due to the coronavirus at the end of May, when more than 60 percent of the population had already received at least one dose of the covid vaccine.

(It may interest you: Homeless people create their own town under a highway)

“I am so incredibly happy to be here and to have survived the pandemic … Here we are celebrating what New York is, “he told AFP one of the first visitors, Barbara Kenner, a 60-year-old former chief of staff and now unemployed due to the Covid-19 crisis, which left more than 30,000 dead in the Big Apple.

“You don’t necessarily have to be in the countryside to have trees or beautiful wooded roads, we can have them here, in the middle of the city. New Yorkers sometimes take it for granted that we live in the best city in the world. This is like our backyard, ”Kenner said on a hot spring day.

Like giant flowerpots installed on the river at different heights, each one of a particular shape and size, the concrete tulips were filled with soil.

In them, more than 350 species of flowers, trees and shrubs were planted, an amphitheater with a capacity to accommodate almost 700 people was installed, another more intimate and a large grassy area to sunbathe or have a picnic, as well as a food court.

The Park, a decade-long work by English architect Thomas Heatherwick (also author of The Vessel lookout at Hudson Yards), It was funded mostly by the Billionaire Barry Diller Foundation and his wife, fashion designer Diane von Furstenberg.

(Also read: The keys to sustainable travel and travelers)

Little Island came at a cost
of 260 million dollars. It houses 350 species of flowers, trees and shrubs, as well as an amphitheater with capacity for 700 people

Landscaper and ex-dancer Signe Nielsen told France Press that her design is based on a “choreography of movement” due to the different elevation levels of the place, with gentle hills and unexpected turns.

It ensures that the park changes in each season and is as enjoyable by day as at night due to strategic lighting.

His wish is that visitors “leave the city, the traffic and enter a space and be surprised.” “I hope they leave calmer and happier than they entered,” he said.

Diller told The New York Times that for 20 years it will pay the high maintenance costs of the park, that was on the verge of shipwreck due to a series of lawsuits until the project was rescued by Governor Andrew Cuomo.

He estimates that in the end there will be disbursed about 380 million dollars on Little Island, the greatest gift from an individual to a public park in the history of the city.
Little Island welcomes New Yorkers and tourists with free tours between 6 a.m. and 1 a.m., but after noon a reservation must be made online.

Starting in June, it will host hundreds of free or low-cost cultural and educational activities for all ages.

Between the columns that support the structure can can still be seen several old wooden pillars of what was the pier 54, preserved to maintain habitat for marine life.

“I think it is a beautiful park; all these wonderful plants, these roads. It’s a really nice place to get some relief from the city, especially Downtown (the southernmost part of Manhattan), where we don’t have a lot of green spaces, “said Lauren Moon Fraser, 33, while sunbathing with her baby. on the Little Island lawn.

(Read: The US Vaccine Donation Details for Latin America)

(It may interest you: How can you obtain residency in the United States?)