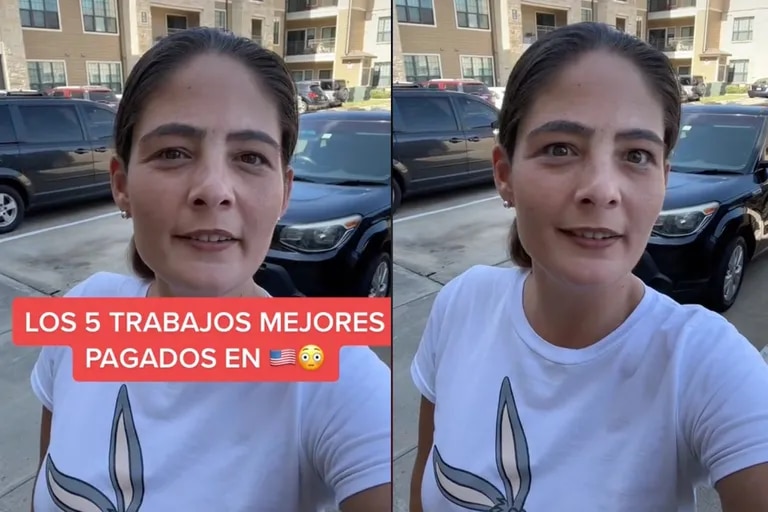 List on TikTok the best paid jobs in the United States and generate a debate: “It will be in another city”

Working in the United States is the dream of many, especially those who are attracted by the amount of money they can get in a single day. For all of them, a tiktoker made known The five occupations in which you can earn more than 40 dollars an hour in the American nation. His post was flooded with doubts and questions. “Which are the requirements?”.

Through her account @nati__show, a Venezuelan living in North America he shared both the jobs and the amount earned in an hour. The highest wage is $50 an hour. and then the list of activities.

1. Logistics manager. According to the influencer, they are professionals who take care of different transports. The salary can reach up to 46 dollars an hour, so for an eight-hour day they would earn 368 dollars.

2. Electrical technicians. They are the workers who deal with problems related to electricity in homes or also in some companies. His salary is $45 an hour, which in an eight-hour day would turn into $360.

3. Technical advisers. His role is to solve the problems of citizens through his skills. In the case of advisors, they can charge up to $42 an hour. That is to say, 336 dollars in eight hours.

4. Nuclear operators. This is perhaps the best paid job of all those mentioned by the Venezuelan, although it can also be risky due to contact with dangerous substances. Workers can receive an amount of 400 dollars in one day by working for eight hours. The pay is $50 an hour.

5. Builders. The construction branch is one of the best paid, although not in all states of the United States. The tiktoker said that the workers receive 40 dollars per hour, which in an eight-hour workday would be equivalent to 320 dollars.

Her video has already accumulated almost two million views on the social network and also hundreds of comments from some users who wanted to be hired in one of the jobs that the woman mentioned.

There are some migrants who indicated the occupation they performed in the North American country, as well as the salary they received: “I work washing dishes and I earn 45 an hour. I don’t have papers, ”said one of them, to emphasize that he earned even more than in some of the positions mentioned by the tiktoker.

Secondly, there were those who dismissed the clip of the woman, since it was not easy for them to get a job, much less a good salary. “The masons will be in another city because here in Texas they don’t want to spend more than 15 or 20 dollars and if you go with Mexicans it’s worse”; “Everything looks nice, but being there nobody wants to give you a job,” they argued.