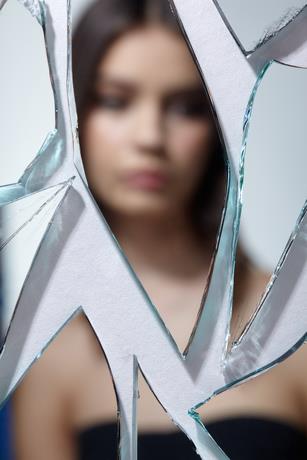 Rocío didn’t show her face. She agreed to tell her story to LISTÍN DIARIO with the promise that she would respect her request. Her marks on her face and neck are the limitation that lead her to hide. She is not Dominican, but “it is as if she were. I feel a lot of love for you who have welcomed me and many Venezuelan brothers”. In this way, he kindly answers the question about his origin and how he came to this country. Although he elaborated on this part, it is interesting to know first about the nearly 20 surgeries he has undergone.

“I can tell you that my first operation was done when I turned 15 years old. That was my gift. In Venezuela this is very popular. Or at least in those days. You see that parents took loans, made sacrifices to give this gift to their daughters. But well, my breasts were enlarged and everything went as expected.” He takes a deep breath and adds between sobs: “I was a doll, beautiful…”. She couldn’t go on.

Recovering a little, he gets ready to continue his count, but not before answering that it is true that he has had 19 surgical procedures, and that he knows people who have had more than that. “As I told you, I started with the breasts, the second was at 17 to raise them a little more. When I was 20 years old, I increased them again, because my build could take a little longer. At that age I took the opportunity to also have lipo. I was super good.” She stops for a moment and makes a parenthesis to remember: “It was a beautiful time, I felt like one of the actresses from ‘Without breasts there is no paradise’, which was fashionable at the time”. Remember that this novel is from the year 2006-2007.

Today 36 years old, Rocío, which is her real name, which is quoted with her consent, admits that she is the unhappiest woman on earth. “I can’t explain to you, how sad and desperate I am. One because of how bad I have been after abusing my body, and another because I still feel like going back to the operating room. Tears silenced a broken voice that was not only telling a story, but also betraying the frustration in this woman.

The gray cloth with turquoise blue stripes that covered her head served as a handkerchief to clean a face that now lives in anonymity. Her common accent of a purebred Venezuelan, gave way to silence that lasted about eight minutes. She continues the story of her always turning her back on the reporters of LISTÍN DIARIO, although not to the questions that were asked. Do you regret having abused your body as you say? To this he replied: “Really, what I regret is not having stopped in time, of not seeking help in time, because I did not know that my addiction to surgeries had already become a psychiatric disorder. I regret that.” This is told with great sadness.

It’s called dysmorphophobia, the disorder with which Rocío was diagnosed, about two years ago, the same time she hasn’t been in an operating room. It was logical to want to know more about this condition. He let her know and immediately asked, “Do you want me to WhatsApp the doctor?” The answer was yes. She called him, but he was driving. While her psychiatrist, who now lives in Colombia, returned the call that she promised, she kept telling. “I myself wrapped myself in that net, one day I saw my wide nose, another day, my jowls, or a little guy… in short, always a defect and an excuse to go to the surgery room.”

After about seven minutes his cell phone rang. “Hello, how are you?” she greeted. “Okay, coming to a meeting, and you Ro, how have you been?”… The phone was on loud and she let him know. “They are interviewing me and the journalist wants you to tell her something about dysmorphophobia.” “With pleasure. Look, I’ll tell you, it is a disorder that makes the person always see some defects, which do not necessarily exist, or if they are and are small, this person magnifies it. This is the case of Rocío, I am the one who calls her Ro. She began to have surgery, she continued, she liked it and then she was trapped in this condition, a product, we could say, of her addiction to her aesthetics. She would fix up one thing, then she looked ugly for another and she kept getting involved until, by fixing up and fixing herself up, she came to what she is telling you today. She knows that this will happen soon and we are working for that, ”concluded the doctor who only gave her last name, and it is Navarro.

While her psychiatrist talked, Rocío listened attentively and only her head could be seen, always covered, getting it right. It is at that moment that she says that she waits for the last corrections from her. “Everything is difficult, and not even talking about economics. In all these processes I must have invested some 100 thousand dollars, or maybe more”. The young woman makes the comment and adds: “And so much that I need them now!” She mourns wistfully.

Dysmorphophobia, the disorder is called

Rocío is strong, but when she talks about her body, she falls down, as she admits. “I can tell you that I have always lived by and for my body. Although nature was good to me, I always had a few complexes. First my breasts, and as I told you I gradually enlarged them; then I wanted more waist, more hips, a more profiled nose, more prominent cheekbones, a more proportionate chin, and that’s how I fixed every little thing that I saw”. Take a break to continue. She is tormented to learn that her face is transformed.

As for the rest, it is important to tell readers that in this interview it was necessary to last more than two hours because the owner of this story found it very difficult to tell. Read why. “It’s just that I don’t accept what I am now, I’m not used to seeing myself like this. That’s why I can’t help but cry.” She makes the effort because she understands that it is her duty to draw people’s attention, especially women who do not leave an operating room without knowing that while the defects they think they have are “fixed”, the effects of dysmorphophobia disorder increase. Remember that this makes the person always see imperfections in her body, even if they do not exist.

Always with her face and torso covered, Rocío answered questions and offered data that increasingly increased the astonishment of the reporters of this medium. Inclusive, her friend and a cousin who were in the place, were surprised by certain comments. “But girl, I didn’t know that you went to that place to have surgery.” This was blamed by one of the young women when the interviewee commented: “There were already surgeons who did not want to work on me because of the risk, and I went to see a ‘healthy killer’ as they call him, and he tried to fix my eyelids and lips, but It made them worse.”

Every detail offered made the curiosity grow to see to what extent his face is disfigured. It was not possible to quench the intrigue. It could only be seen that she was wearing white pants and pink tennis shoes. Nobody knew about her blouse, or how she wore her hair. Her only intention was to help her story serve as an example to those who put themselves in inexperienced hands and go to extremes in the amount of surgery.

The last surgeries he has undergone have been here in the Dominican Republic and he has done better. “That person is helping me and I have been seeing the results. He has made me some corrections little by little. I’m getting carried away. I have scheduled other correction processes to see what I get, but it has not been easy. I have suffered a lot. Because of this addiction to beauty, I lost my boyfriend, a good man who didn’t want me to continue with this, well…”. He cries and in the midst of crying he lets it be known that he didn’t pay attention to him and today he also suffers from it.

Drop the subject of your relationship. It seems to affect him a lot. He goes on to say that when he came to the country some time ago, it was precisely to visit local surgeons about whom he had been told very well. “Of course, I have to say that I have never blamed the doctors for what happens to me. I have been the insatiable one, the stubborn one, the sick one, because that is what I am, a sick person”. No need to tell them how this date ended.

As she calms down, she gives her friend permission to explain how serious her situation is. “Well, what can I tell you, even if you don’t see her, you must imagine what she is like. But well, she has very extended eyelids, a totally deformed nose, very exaggerated cheekbones, and lips that don’t even speak. The neck is also affected, and some parts of the body, like the buttocks, are a bit out of shape.” She is also affected.

“The girl is still alive because her psychiatrist has helped her a lot to understand that dysmorphophobia is a disorder that is paid attention to. He continues to watch over her virtually, and we support him here.” Some of her relatives live in Venezuela, another in the United States and a few here.

A little recovered, Rocío, after all the breaks taken to continue with the interview, decides to conclude with a message: “To you woman, and to you man, because there are many who are also addicted to surgery, today I tell you to reconsider, Stop, that it is true that we can improve various parts of our body with surgeries, but we must stop to think that internal beauty also counts, that inner peace is the most important thing. If you decide to go to the operating room, go to a good surgeon, and let yourself be guided by his advice, and always, always, seek help from a psychologist or psychiatrist if you see that you are creating an addiction to cosmetic surgery. She ends up satisfied with her contribution.