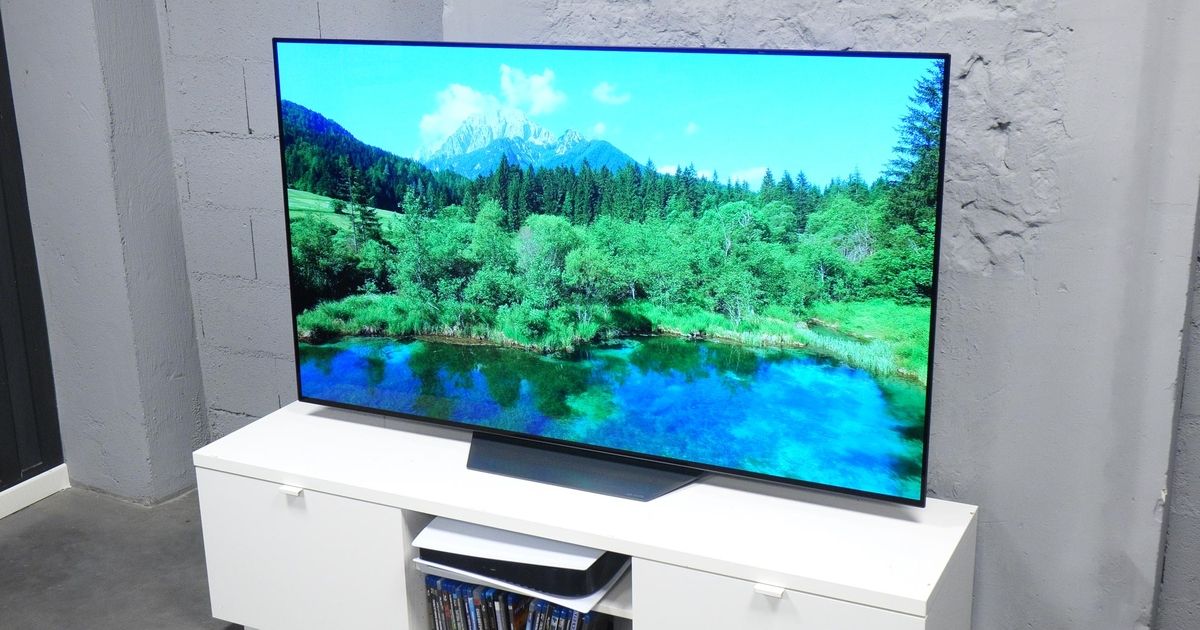 The LG 65B1 uses the same Oled panel as the 2020 LG Oled 65CX TV. As with all Oled TVs, each pixel is made up of four sub-pixels (one green, one red, one blue, and one white). The white and red sub-pixels are larger in order to improve the maximum brightness of the panel, while maintaining a color temperature close to 6500 K. As is now customary with Oled technology, viewing angles are excellent. We measured only 22% brightness loss at 45 ° and there is no variation on black – which is absolute.

The image quality in Filmmaker mode is just perfect. The color temperature measured at 6690 K is very close to the 6500 K of the video standard, with in addition a stable curve over the entire spectrum. With an average gamma of 2.44 for a target of 2.4, the gray levels are also reproduced very well, while the average Delta E of less than 3 guarantees colors faithful to those of the source. Finally, as always with Oled technology, the contrast is considered infinite. Indeed, even with a white calibrated at 150 cd / m², the black is measured at 0 cd / m². This contrast is still impressive and allows you to enjoy all the nuances, even in complete darkness.

If the LG α7 (Alpha 7) Gen 4 video processor is on paper less powerful than the α9 (Alpha 9) Gen 4 AI on board the higher-end LG Oled televisions (C1, G1, Z1, etc.), it is clear that it is difficult to see a difference in our test scenes. This α7 processor does a pretty good job of scaling and most importantly benefits from a very capable motion compensation motor – probably as much as the C1’s. The TruMotion can still be controlled by hand by managing saccade (De-Judder) for 24/25/30 Hz content and blurred areas (De-Blur) for 50/60 Hz content. As on the C1, the biggest improvement concerns the system of insertion of black images which makes it possible to deceive the retinal persistence (Oled Motion Pro) without flickering in “weak” or “medium” mode.

In game mode, the display delay is measured at 12.8ms, but LG is offering a new Boost option this year via the Game Optimizer panel which allows the display delay to be reduced to just 9.2ms. There is less than one frame of delay from the 60Hz source, and therefore no lag between the action on the controller and its impact on the screen. On the afterglow side, Oled technology is still unmatched on the market, with a time less than a millisecond, while the best LCD televisions can only do better than 11 ms.

Game mode needs some tweaking to get the perfect picture. The most important thing is to reduce the color temperature to a minimum (Image> Advanced settings> Color> White balance> Color temperature> Warm 50). After all, the TV delivers a good picture, even in Game Optimizer mode.

Unlike the LG CX and LG C1 which have four HDMI 2.1 inputs, the LG 65B1 only has two HDMI 2.1 inputs on its four HDMIs. These two HDMI 2.1 inputs are compatible with all the features of this new standard, namely 4K streams at 120 Hz, VRR (Variable Refresh Rate) which prevents image tearing and jerking, ALLM (Auto Low Latency Mode) which allows automatic switching to game mode when a console is detected, or eARC for lossless audio feedback. LG TVs are also the only ones to be compatible with G-Sync – VRR à la Nvidia – and FreeSync Premium (in non-Pro version, because LG prefers the TV to manage the HDR layer).

The LG 65B1 looks a lot like the LG C1. Aesthetically, only the foot really differs between the two televisions. The B1 foot is narrower and it is made of plastic, which translates into slightly lower audio performance (see the audio part).

The central foot is content with a depth of 24.6 cm. The LG 65B1 is therefore at ease on our reference cabinet measuring 160 x 40 cm. It even leaves room to install a sound bar.

The back of the TV is as simple as possible. We find the power supply on the left and the connectors on the right as well as a very simple cable management system at the rear of the central foot.

This television has four HDMI inputs, two of which are 2.1 compatible (inputs number 3 and 4), two USB ports, one Ethernet port, one optical digital audio output, one headphone output, one PCMCIA (Common Interface CI +) port, one USB connector. antenna rake and a satellite. It also includes a DVB-T / T2, DVB-S / S2 and DVB-C tuner (TNT, satellite and cable), as well as Wi-Fi 802.11a / b / g / n / ac and Bluetooth 5.0 for connection with a wireless audio device (headphones or speaker).

With webOS 6.0, the home page now displays recommended content as well as installed apps. There is also some information about the television (devices connected via HDMI and USB, smartphone, etc.). The main applications are available (Netflix, YouTube, Amazon Prime, Google Films, BeIn, Spotify, OCS or Deezer and My Canal since May 2021). The apps launch quickly and stay in memory for a quick recovery, but this version seems a bit slower than the previous one, especially on this B1. WebOS 6.0 mainly purifies the settings menu, which is reduced and customizable. The system still embeds the voice assistant Google Assistant and Alexa. The two assistants are accessible directly via dedicated keys on the remote control. The television is also compatible with Google Cast, HomeKit and AirPlay 2. Finally, Magic Explorer allows contextual searches according to the content on the screen (actor, name of the director, critic, etc.).

In terms of responsiveness, webOS is still positioned as a benchmark, just like Samsung’s Tizen system. The television starts up in just 8 seconds and it always takes 4 seconds to wake up. On the other hand, the extinction now displays a giant LG logo which extends the standby time to 2 s.

The new Magic Remote maintains a very low center of gravity which allows it to fit effortlessly in the palm of your hand, the gyroscope to control the pointer and the built-in microphone allowing voice searches. It sports a new, more current design. The big news is the integration of NFC for quick pairing with a smartphone in order to send the images to the TV – as long as you have an Android smartphone with the LG Things app. There are also buttons dedicated to the most famous streaming services (Netflix, Prime Video, Disney + and Rakuten TV), as well as direct access to Google Assistant and Alexa.

Our settings and measures

We set the LG 65B1 TV to Filmmaker mode, then we lowered the Oled brightness to 47 and turned off the power saving mode to get a white close to 150 cd / m². We recommend setting the TruMotion option in User mode with the Saccade option at 4 and Zone Blur at 7. The Oled Motion Pro option enables the insertion of black images to improve sharpness in “low” mode. and “medium” without any flicker. Finally, to find faithful colors in Game mode, you should set the color temperature to Warm 50 (Settings> Image> Advanced settings> Color> White balance> Color temperature).

The detailed results obtained with these settings: