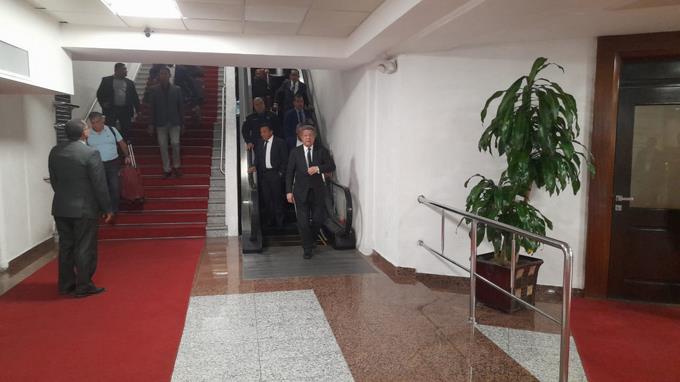 The president of the People’s Force, Leonel Fernández, returned to the country this Wednesday, after his tour of several cities in the United States, where he swore in several people from different locations in that nation.

Fernandez returned at 5:15 p.m.on the commercial flight of Delta Airlines, coming from the city of New York, through the International Airport of Las Américas, José Fráncico Peña Gómez.

This came accompanied by some collaborators and friends who accompanied him on his tour of several cities in the United States.

They hinder the work of the press in AILA

At the arrival of the former head of state at the airport, a major from the Dominican Air Force (FARD), surnamed Valentín, assigned to the Specialized Airport Security Corps (CESAC), tried to hinder the work of journalists, claiming that he could not take photos or do an interview in the area.

The officer’s attitude caused adverse reactions from the communicators present who were trying to interview Fernández at the time he entered the airport’s ambassadors’ lounge.

“You cannot be here without authorization. They have to have permission from superiors to take photos and interviews here in this place,” the officer declared in a threatening tone, despite the fact that the journalists from the different media outlets, including the Listín Diario, carried their press cards, which authorize access to airport facilities.

At no time did the members of the security of the former president show opposition so that the journalists could talk with him, contrary to the CESAC officials, who did try to impede the work of the press.

Despite the situation, the general director of CESAC, Major General, Carlos Febrillet Rodríguez and the members of the press assigned to the airport there are good relations and collaboration on both sides.