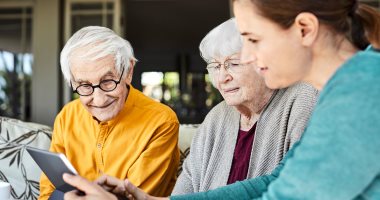 Alzheimer’s disease is a progressive disease, which means that symptoms will gradually increase over time. There are 7 main stages:

1 – There are no symptoms at this stage. If you have a family history of Alzheimer’s disease and no symptoms, you may want to talk to your doctor about strategies for healthy aging.

2- Early symptoms appear, such as forgetfulness.

3- Mild physical and cognitive impairments appear, such as decreased memory and concentration. Learning new skills may become more difficult. Such changes may be noticeable only by a person who is very close to the person.

4 – Dementia: Alzheimer’s disease is often diagnosed at this stage, but it is still considered mild. It is common to notice memory loss and difficulty managing daily tasks.

5- Moderate to severe symptoms will require help from loved ones or caregivers, and this is necessary to ensure that daily needs, such as eating meals and managing the house, are met.

6- At this point, a person with Alzheimer’s disease will need help with basic tasks, such as eating, getting dressed, and using the toilet.

7 – This is the most severe and final stage of Alzheimer’s disease. There is usually a gradual loss of speech and facial expressions, and movement is likely to become limited.

As a person progresses through these stages, they will need increased support from their caregivers.