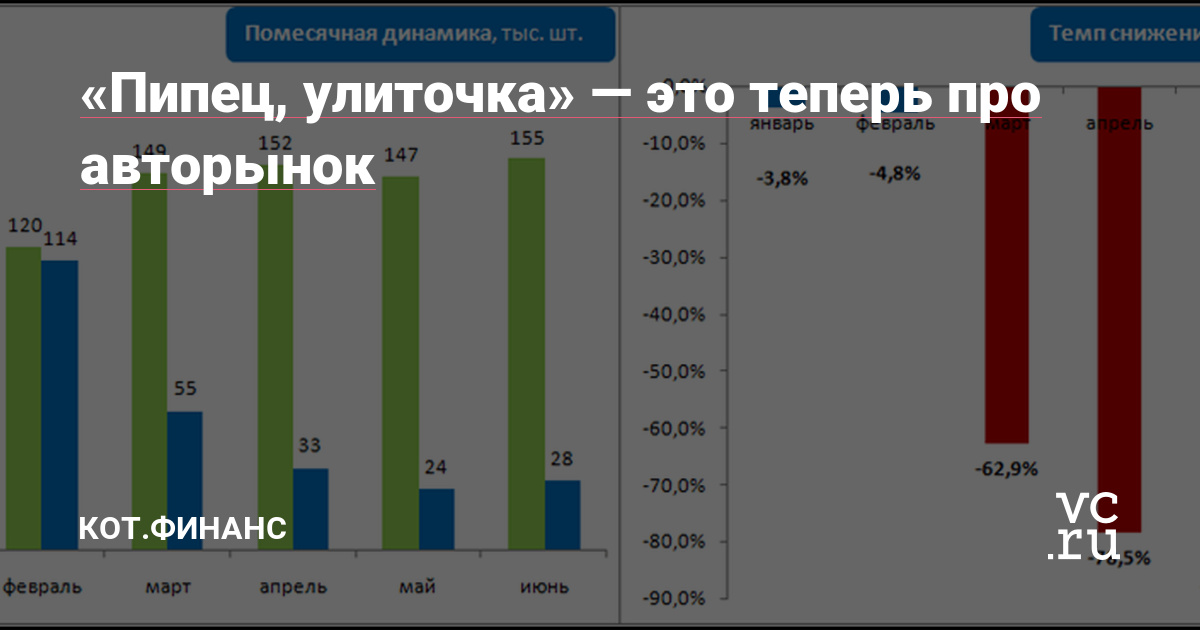 A couple of months ago, I wrote my assumptions that the Russian car market will fall to 0.8-0.9 million cars, and this will be the biggest drop in the market from zero (before, no one just counted). The fall of 50% was only in 2009. It turned out that 0.8-0.9 million at the end of the year is also a super positive scenario. Six months of data came out today. And there is darkness.

In June, sales of new cars in Russia amounted to 28 thousand cars (-82% compared to last June). Everything points to the fact that 2022 will be the worst year in history.

Monthly dynamics is also incredibly negative: since April, the number of cars has fluctuated around 30,000 units. That is, no substitution simply works. The graph of the rate of decline in sales does not look like market analytics, but like dripping bloody drops.

The accumulated backlog, which is not the most successful year anyway (1.7 million cars were sold in 2021; and 2.9 million in 2012) amounted to 58%, and this is against the backdrop of the first two quite successful months.

If we extrapolate the data from the first half of the year to the second, then the sales volume will be 0.7 million units. This is if half a year is multiplied by two. But after all, such as the first two months may not be. If the market remains in the amount of 25-30 thousand cars per month, then by the end of the year the market volume will be 0.5 million cars. Then it will be three times worse than the critical 2009.

See also  Instagram and TikTok are affecting your happiness and finances

This is a pipets, a snail.