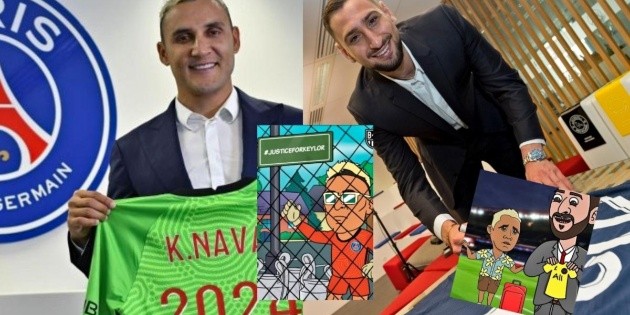 With the signing of Gianluigi Donnarumma the PSG will have a great sporting rivalry in the arc that will also be disputed Keylor Navas. And it is that whichever of the two remains in the bench of the substitutes, it is a great injustice. Despite his young age, the Italian has just been a figure with his team after winning the European Championship. While all that he has achieved Keylor in Europe is history, highlighting the three Champions League with Real Madrid.

However, this hiring of Donnarumma has generated a great controversy, taking into account that it seemed that the PSG he did not need to reinforce that position. First of all because of the level that it has been showing Keylor Navas in two years with the team and second because the Tico had recently had his contract renewed. For these and many more reasons, the memes did not wait through social networks.

The memes exploded on the networks!

Through social networks, some fans were surprised by this bomb transfer of Gianluigi Donnarumma and made remember when Keylor had to live a similar situation at Real Madrid with the arrival -at that time- of Belgian Thibaut Courtois, which ended with Keylor’s departure to football in France with PSG.

Will the same happen this time? It seems complicated because to this date an offer from another important club for Keylor Navas has not arrived. In addition, the Tico having a contract with PSG and also earning a good salary, it is difficult for another team to match that. Now, it is clear that Navas will not be a substitute goalkeeper or at least today is what can be seen. A goalkeeper with a career and a winning spirit will have to once again demonstrate his skills on the court.