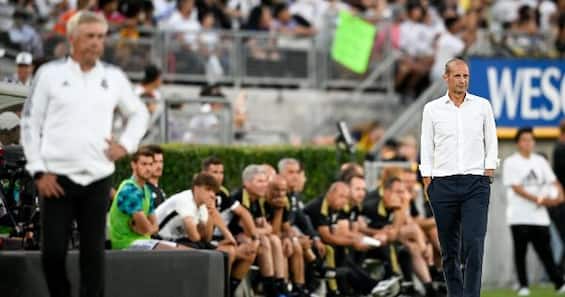 Juve Real Madrid, Allegri: ‘Good work in the US, we can still grow a lot’

The words of the Juventus coach to the official website of the club after the knockout against Real: “We faced the strongest team in Europe. Now we rest a couple of days and then we go back to work, the championship is approaching” . Locatelli: “We are sorry for the result, but I have seen good things”. Perin: “Real? They can be found by heart, what we want to achieve”

JUVE KO 2-0 AGAINST REAL – JUVE-REAL: THE MOST BEAUTIFUL PHOTOS OF THE CHALLENGE

Juve are ready to return to Italy after the tour americana. Victory against Chivas, equal against Barcelona and, now, the knockout against Real in the Italian night. Allegri traces the balance of the ten days of his team with stars and stripes, positive: “It was a good match – said the Juventus coach to the official website of the club -, and that concludes a beautiful ten-day job in the United States. We faced the strongest team in Europe, as long as it was possible to play we did it, trying to manage the possessions and not throw the ball away. I am satisfied with the work of the boys, we can still grow a lot, there are players who have to return. Tonight there have been many occasions on both sides: we should have managed ours with a little more patience. “Now test the continuation of the preparation for Serie A:” We rest a couple of days and then let’s go back to work, the championship is approaching “.

“We are sorry for the result, but I have seen good things – these are the words of Locatelli, who confirms:” The team is working and growing well in view of the championship; we do not hide, we have to win again and we work for it, and I must say that the work we are doing is of an excellent standard. There is a good atmosphere and it was a useful and positive tour “.

Among the most positive performances that of the Juventus goalkeeper, super on at least two occasions in the second half on the result of 1-0: “We are working well, absorbing a new game system, I saw a great availability on the part of everyone – he said -. The group grows, it takes time and games like these are fundamental, because friendlies no longer exist; in front of great opponents like Real you always want to win. What impression did I have of the opponents? That of a team that is memorized, and that’s exactly the point we want to get to. We work for this. The? I’m fine, physically, and mentally charged. “The goalkeeper, born in 2002, also spoke to the club’s website Giovanni Carnations: “For me it was not an experience; it was the experience par excellence, I learned a lot. One thing that struck me in training? Vlahovic’s ability to change angles quickly, a crazy thing.”