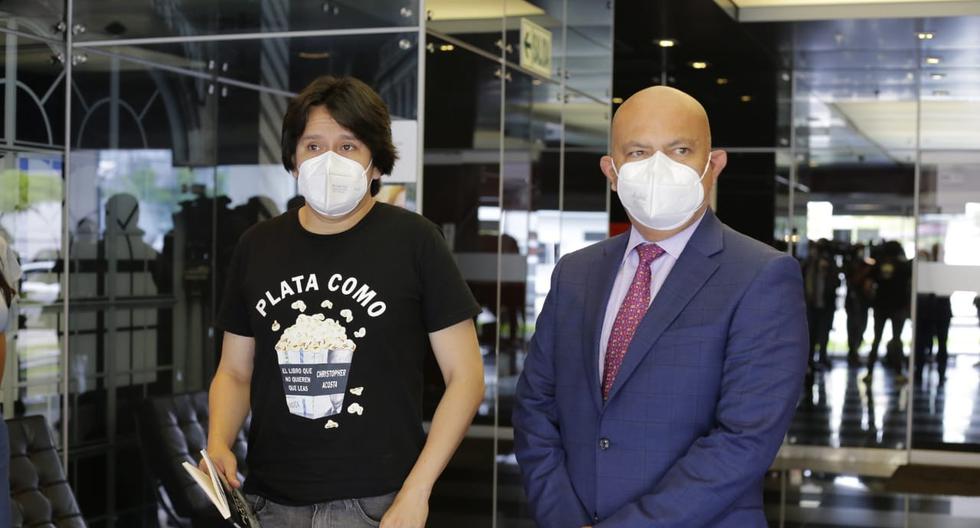 Judge condemned Christopher Acosta: the gaps and dangers of the ruling that violates the freedom of the press | Cesar Acuña | Silver as a court | Judicial Branch | ANALYSIS | POLITICS

Of the 55 sentences that the former presidential candidate of the Alliance for Progress (APP) Cesar Acuna considered offenders in the book “Plata como cancha”, by Christopher Acosta, Judge Raúl Jesús Vega admitted 34, at the hour to condemn the investigative journalist and the director of the Penguin Random House publishing house, Jerónimo Pimentel, to two years in prison suspended for aggravated defamation.

LOOK: Press Council and National Association of Journalists reject the condemnation of Christopher Acosta and will request a visit from the IACHR rapporteur

The head of the 30th Liquidating Criminal Court of the Superior Court of Justice of Lima also imposed the joint payment of S / 400 thousand from Acosta, Pimentel and the aforementioned publishing house in favor of Acuña Peralta, as well as rules of conduct, including not being absent from home without judicial authorization and attending biometric control every 60 days to report their activities.

“What a good president can be a man who beat, insulted and spat on his wife, who has three children out of wedlock and who does not fulfill his responsibilities.” This was one of the phrases in the book “Plata como cancha” that Judge Jesús Vega considered defamatory against the former regional governor of La Libertad. However, the author of it was not Acosta, but former congresswoman Rosa Núñez.

LOOK: Christopher Acosta’s lawyer after sentence of the PJ: “It is a deadly blow to investigative journalism”

Núñez, during the divorce process of Acuña Peralta, where the distribution of the assets of the marriage was at stake, revealed in November 2015, in an extensive interview in the newspaper “Perú21”, that he suffered physical and psychological abuse from the leader of APP .

Jesús Vega also attributes to Acosta statements made by Rosa del Carmen Gutiérrez’s lawyer, who described him as a “rapist” in the newspaper “La Industria” in 2006.

MIRA: The question of the day: What reasons did the judge who sentenced the journalist Christopher Acosta give? | VIDEO

Lawyer Andres Calderon, director of the Legal Clinic of Informative Freedoms of the Universidad del Pacífico, affirmed that the most remarkable thing about this ruling is that the judge “ignores” the doctrine of “faithful or neutral reporting”, which is recognized by the Inter-American Court of Human Rights (I / A Court HR) in the Herrera Ulloa Case in 2004.

“For the exercise of journalistic work and freedom of expression, sometimes it is necessary to refer to what another person has said. If Acosta cited Acuña’s ex-wife, she cannot be required to corroborate [la denuncia de esta]. What you must prove is that the lady said it and that it has been well contextualized. This is something that the judge has ignored in various parts of the sentence, contravening the standard of faithful reporting, which is mandatory, after the judgment of the Inter-American Court ”, he stated.

Calderón, in communication with El Comercio, also argued that a journalist, such as the author of “Plata como cancha”, may refer to events, such as allegations of misappropriation of funds from the Municipality of Trujillo in favor of APP militants, although these have not been brought to trial.

This in reference to the fact that Jesús Vega admitted Acuña’s complaint, at this point, arguing that, in August 2019, the prosecution sent the accusation against the former mayor of Trujillo to the archive for alleged diversion of public resources.

“Here the judge fails, when he says that you can only talk about a fact that could have criminal matter if the Judicial Power has previously sentenced,” remarked the lawyer.

The magistrate Raúl Rodolfo Jesús Vega imposed 2 years in suspended prison on the author of ‘Plata Como Cancha’ and a civil compensation of 400 thousand soles, based on a lawsuit filed by César Acuña.

Calderón also warned that Judge Jesús Vega, in his sentence, refers to a standard of “reliable source”, but does not argue exactly what he refers to.

“Here is a problem of motivation, the magistrate would have to say why they do not seem reliable [las fuentes usadas por Acosta en el libro]. The journalist has complied with citing third parties that have already been published and have not previously been questioned. If the judge believes that there was intent on the part of the author of the book in trying to find sources that would suit him, he should have said why he doubts these sources. This is clearly a motivational error, which could help invalidate [en segunda instancia]”, He declared.

He also pointed out that there were no arguments to define the situation of Pimentel, because he, as director of the publishing house, does not investigate or edit the book “Plata como Cancha.”

“We would be facing a verification standard that would make the editorial route unfeasible in any country. And if we talk about the amount of civil damages, what did Jesús Vega use to calculate the S / 400 thousand? Most of these phrases have already been said publicly before, and if Acuña’s honor has not been damaged, why several years later, yes, “he said.

Fátima Toche Vega, lawyer at the Iriarte & Asociados firm, it considered the sentence against Acosta and Pimentel as “terrible” and “contrary” to all national and international jurisprudence regarding the media and freedom of expression.

What is a reliable source? Who determines that it is? There are situations where there is no truth and a lie, but where there are gray dots. In other words, a journalist cannot raise issues to public opinion so that it can establish its criteria. How can a journalist not be able to cite a third party as a source? “, He stressed to this newspaper.

He recalled that many of the phrases admitted by the judge appeared before in the media.

“This is terrible for the press. It cannot be said that a journalist is a defamer just by citing what another person has said, to cite sources, this is something established in the jurisprudence of the Inter-American Court, and of the Supreme Court and is part of the right to freedom of expression, “he said.

In the plenary agreement of the Supreme Court of Justice N ° 3-2006 / CJ-116, which is binding, it establishes that for the cases of “neutral reporting, the duty of diligence is satisfied with the verification of the truth of the fact. of the declaration, but it does not extend in principle to the need to prove the truth of what has been declared ”.

Toche said he doubts that the sentence against Acosta and Pimentel will be ratified in a second instance.

“There is too much jurisprudence to the contrary, which protects the press when sources are cited. Acosta has not given a defamatory opinion against Acula, he has generated a narrative through different sources and public statements, there is no basis for saying that he has defamed him ”, he indicated.

The lawyer also questioned whether the judge has established that there is a dependency of Acosta’s work at the publishing house Penguin Random House for having transferred the royalties from the book “Plata como cancha.”

“This has neither head nor tail, firstly because Acosta is not a worker of the aforementioned company, he is not under the supervision of the publishing house, yes, he gives copyright, but for that reason under no circumstances can the director of the publishing house assume responsibility for the contents of a book that is published under his seal, “he said.

Toche pointed out that it is likely that Pimentel and the publisher were included in the lawsuit in order to get “a lot of money” in the civil reparation payment. “The only way that the publisher could have responsibility is if it had done a prior control [del libro] and would have dictated the contents to Acosta. The edition is more about a commercial and style issue, but it is the author who determines what is going and what is not going ”, he added.

A risk to press freedom

The executive director of the Peruvian Press Council (CPP), Rodrigo Salazar Zimmermann, said that the sentence for aggravated defamation against Acosta and Pimentel is a “regrettable precedent” and that violates freedom of expression, because as of this ruling, journalists have no predictability about how the Judiciary will interpret the quotes from sources that are used for publications.

“The main concern is that Judge Jesús Vega has said that the journalistic sources we use may not be valid. What is not known under this sentence is why or how these sources are valid or not. And this sentence is serious because it makes the journalist responsible for the information he collects from third parties, “he warned.

LOOK: Rafael López Aliaga and Keiko Fujimori: The opposition does not have a defined leader

Salazar Zimmermann, in dialogue with El Comercio, indicated that the meaning of the ruling is “absurd”, especially when it blames Acosta for statements made by Acuña’s ex-wife.

“Here we do not speak that Acostó looked for someone who attends a winery, he cites a direct source, the ex-wife [quien en denunció maltrato físico y psicológico]She was a person close to the former candidate ”, he stressed.

The executive director of the CPP indicated that Acosta sought out Acuña to obtain a series of responses for the book. “He had the opportunity to respond in a long interview, but he did not, so there is no malice [de parte del autor]”.

LOOK: Hernando Cevallos: “It is very clear that our health system is fragile” | INTERVIEW

The Press and Society Institute (IPYS), through a statement, considered Judge Jesús Vega’s ruling “aberrant”, because “it sets a dismal precedent for journalism.”

The institution indicated that it trusts that superior judges “will act to guarantee the freedom of expression violated in the first instance of the process.”

Look here at the sentencing hearing: