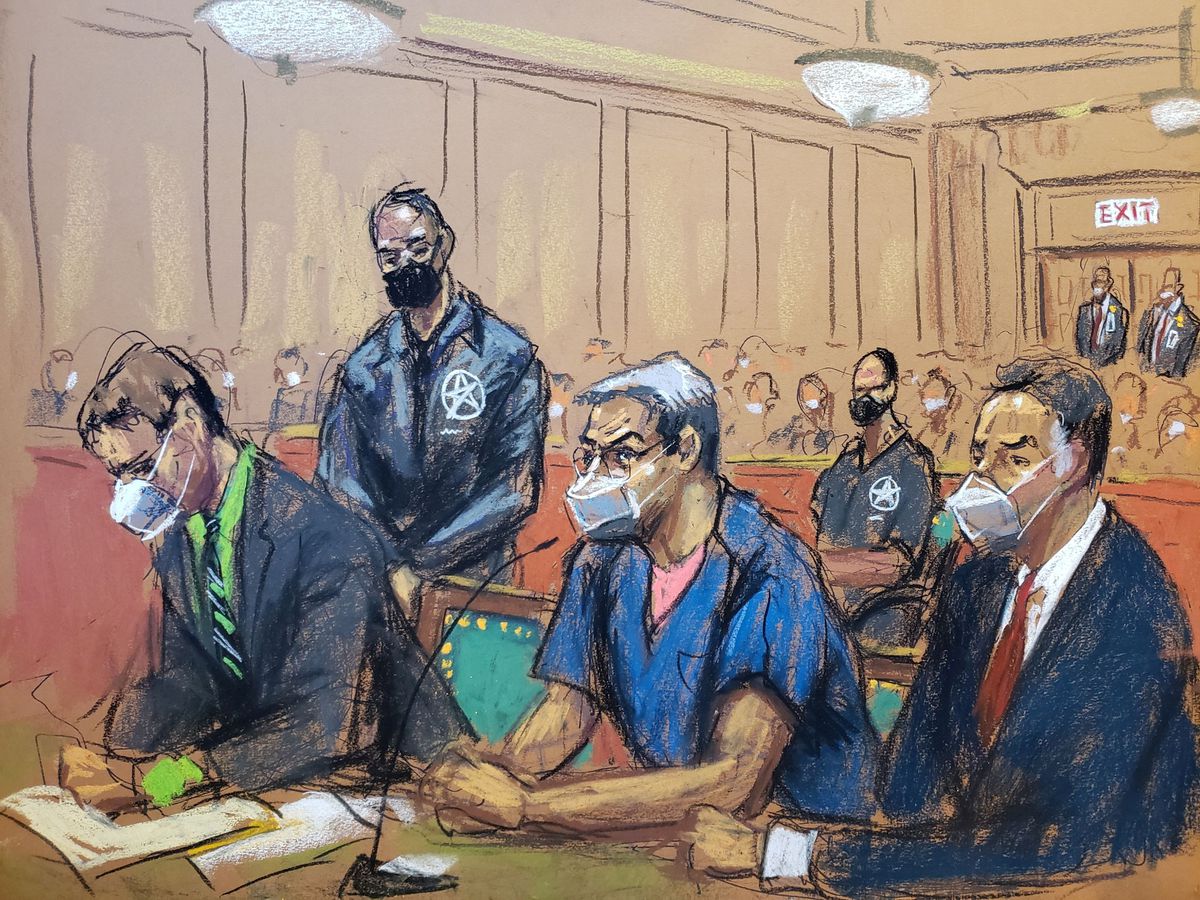 Former Honduran President Juan Orlando Hernández pleaded not guilty this Tuesday before a New York court that is trying him for drug trafficking. US prosecutors accuse Hernández, extradited to the United States and who appeared at the hearing with chains around his ankles, of receiving millions of dollars from drug traffickers in exchange for protection while he ruled Honduras from 2014 to January this year. Prosecutors have alleged that Hernández used the money to enrich himself and finance his political campaigns. In today’s session, held in a federal court in Manhattan, the former president’s lawyer complained about the “prisoner of war” conditions in the prison where Hernández awaits the trial.

The former president pleaded not guilty to three criminal charges, including conspiracy to import cocaine and weapons possession, at an arraignment before US District Judge Kevin Castel. The former president entered the courtroom wearing a blue T-shirt with ankle chains and spoke briefly through a Spanish interpreter to say that he was not guilty.

Hernández has denied the accusations in the past, presenting himself as a fierce opponent of drug cartels and accusing traffickers of slandering him to get revenge and lighten their sentences. At the hearing, his lawyer Raymond Colón said that Hernández was being held in solitary confinement at the Brooklyn Metropolitan Detention Center and that he had not been allowed to call his family. Colón has claimed that he was denied access to visit Hernández on several occasions. “He is being treated like a prisoner of war,” Colón has said. “We are not asking that he receive special treatment because he is a former head of state, but these conditions are psychologically debilitating.”

A spokesperson for the US Bureau of Prisons has confirmed that Hernandez is being held at the Brooklyn facility, but declined to comment on “the conditions of confinement of any individual inmate,” Reuters reports. Castel has ordered prosecutors to discuss Hernandez’s detention conditions with officials at the Metropolitan Detention Center and report back to him. “I can’t imagine why he couldn’t call family, have access to email or lawyers,” said Judge Castel, the same judge who presided over the trial that sent his brother Juan Antonio ‘Tony’ Hernández behind bars in United States for the rest of his days.

The next hearing is scheduled for September 28 and it will define the date of the trial, which is expected to begin at the beginning of next year with the constitution of the jury that with its ruling will seal the future of the former president. Hernández, who was extradited to the United States on April 21, seemed relaxed during Tuesday’s hearing. Entering the audience room, he addressed the large audience and made a brief salute with his hand on his heart. This did not prevent him from hearing expletives from the public at the end of his appearance, calling him “Rat”, “Murderer”, “Repent, Juan Orlando!”.

For the time being, JOH, as he is known in Honduras, will continue to be detained. The defense later announced to the press that it is trying to find the guarantees to present a “several million” bail so that the former president, who handed over the command to his successor, the leftist Xiomara Castro, on January 27, can await the free trial.

Hernández is accused of receiving “millions of dollars” from drug cartels, including Mexican drug trafficker Joaquín ‘Chapo’ Guzmán, also sentenced to life in prison in the United States, and of creating a “narco-state” during his presidency (2014-2022). .

The former chief of the Honduran Police, extradited to the US

This same Tuesday, the former head of the Honduran National Police Juan Carlos ‘El Tigre’ Bonilla was extradited, accused of “supervising” the alleged drug trafficking operations of JOH. Bonilla “allegedly abused his positions in the Honduran police to circumvent the law and play a key role in a violent international drug trafficking conspiracy,” Manhattan prosecutor Geoffrey Berman said at the time.

According to the US prosecutor’s office, Hernández would have helped introduce 500 tons of cocaine into the United States between 2004 and 2022. According to the indictment, the drug money served him to enrich himself and “finance his political campaign and commit electoral fraud” in the presidential elections. of 2013 and 2017.

The defense hopes to have the testimony of people from successive US administrations, Barack Obama and Donald Trump, with whom he collaborated to extradite other drug traffickers who are currently serving sentences in the United States.

The defendant, who came to boast of Washington’s praise for his government’s work in drug seizures and the fight against organized crime, could seek to reach an agreement with the prosecution to see his sentence reduced. But US justice seems to be willing to send a strong message, as it did with his brother ‘Tony’, with his collaborator Geovanny Fuentes Ramírez, sentenced to life imprisonment, and with Fabio Lobo, son of former Honduran president Porfirio Lobo (2010- 2014), who is serving 24 years in prison for the same crime. US authorities have warned that they are determined “to disrupt the entire ecosystem of drug trafficking networks that harm Americans.”

Subscribe here to the EL PAÍS América newsletter and receive all the key information on current affairs in the region.