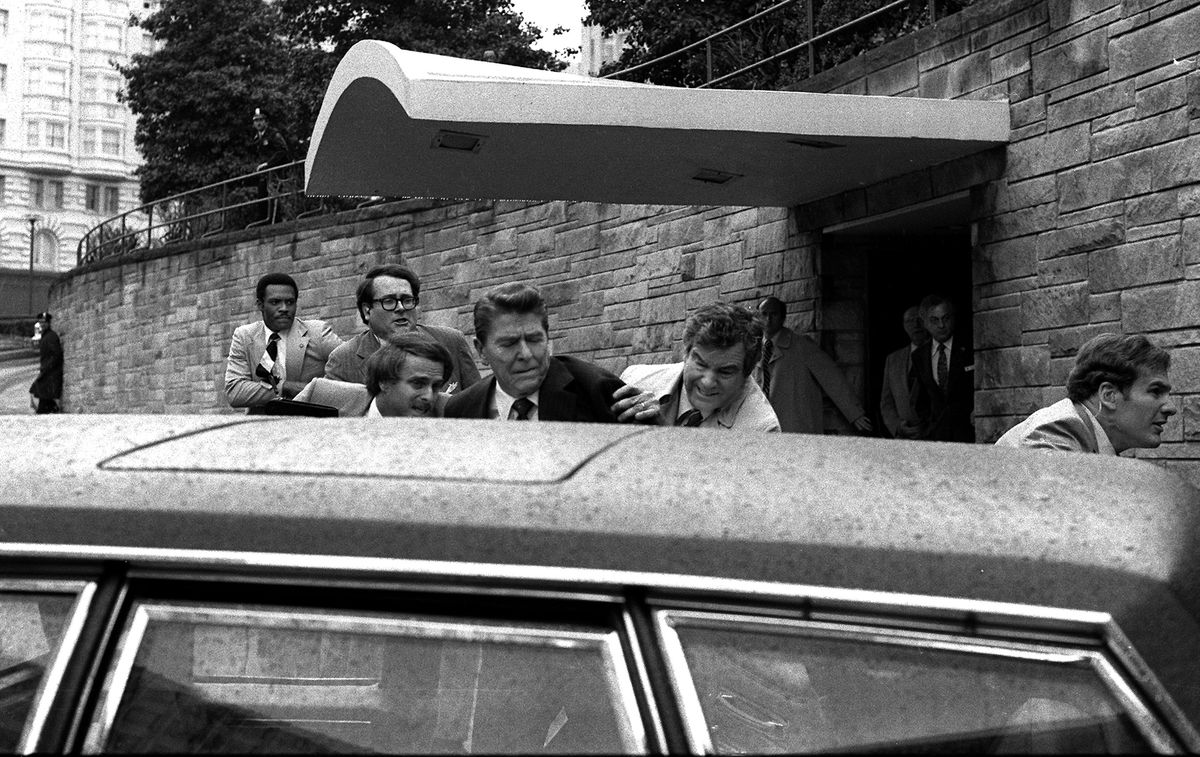 John Hinckley: The day Reagan was born again (and won the presidency) | International

The Hilton, an imposing double-arched brutalist hotel, is one of the most prominent attractions in the great political theme park that is the city of Washington. A plaque recalls that there at 2:27 p.m. on March 30, 1981, precisely “on the 100th visit of an American president” to the place, a disturbed man named John Hinckley, Jr., who was seeking to impress actress Jodie Foster, shot at Ronald Reagan with a 22-caliber revolver loaded with “expansive” bullets, the kind that maximize damage.

The actor who had become president, who almost didn’t tell, had just spoken before an audience of construction businessmen at the International Ballroom, one of the most famous halls in the city, where the correspondents’ dinner is held every year. the White House. He took the T Street exit, where reporters were waiting for him. Camouflaged among them, a ruddy boy with the look of a nobody could not believe that it was so easy to have the president in his sights. He fired six times. One of the bullets ricocheted off the limousine and hit Reagan under the left armpit, who yelled, “What the hell was that!” The projectiles also hit White House press secretary James Brady, Secret Service agent Tim McCarthy and local police officer Thomas Delahanty. The three survived, but Brady got the worst of it: disabled for the rest of his days, his death in 2014 was attributed to the shooter by the coroner in the degree of homicide, although the federal authorities decided not to pass that criminal bill to Hinckley .

This Wednesday, 41 years later, a new page will be written on one of the most traumatic episodes in recent US presidential history with the unconditional release of Hinckley. The judge’s decision was celebrated by the failed assassin on Twitter: “Thank you very much to everyone who helped me (…). What a long and strange journey it has been. Now is the time to rock and roll”.

And what about rock and roll It’s not figurative: the guy is determined at 67 to pursue a music career, and he already has a sold-out concert planned: July 8 at a 450-seat Brooklyn hotel.

A big thank you to everyone who helped me get my unconditional release. What a long strange trip it has been. Now it’s time to rock and roll.

The “long and strange journey” can be summed up like this: in 1982 he was found not guilty by reason of insanity and sent, in a decision surrounded by controversy, to St. Elizabeth psychiatric hospital in Washington, from which he left in 2016 with a warrant of removal from Foster and the victims and their families, and on the condition that he go live with his mother in Williamsburg, Virginia. The judge allowed him two years later to leave the nest and become independent, and in 2020 he gave him permission to share his songs with the world. He has a YouTube channel and about thirty songs, with guitar and voice (of little interest), on Spotify. Your Redemption Tour (Redemption Tour) is open for hiring.

See also  Liliana Resinovich died of "heart failure", the autopsy does not resolve the mystery of Trieste

Hinckley thought killing Reagan would impress actress Jodie Foster, then an 18-year-old star who had decided to jump off the speeding train of fame to study at Yale University in New Haven, Connecticut. That was the destination of the would-be assassin’s journey, four days by bus from Los Angeles. He had become obsessed with her in the movie Taxi Driver (Martin Scorsese, 1976), in which Robert De Niro was a taxi driver with plans to assassinate a presidential candidate. Hinckley decided to stop in Washington, and, after reading the White House forecast for that Friday in a local newspaper, he changed his mind on the spot.

That day dawned wet and cloudy. Reagan had only been in office for 69 days, and things were not going well. He hadn’t yet finished his honeymoon with the voters and his approval ratings weren’t where he expected. “The assassination attempt silenced criticism of his management at a critical early point in his tenure,” HW Brands, author of Reagan: The Life (2015), one of the reference biographies on the fortieth president. “The good humor that he exhibited during his recovery [pasó solo 12 días en el hospital] convinced many skeptics. Some of his followers believed that God had forgiven him to allow him to finish his work. And it is possible that Reagan himself thought so too.

Coinciding with the 30th anniversary of those events, the journalist Del Quentin Wilber published Rawhide Down (2011), a meticulous investigation full of revelations and written as a novel of true crime. Two conclusions can be drawn from reading the book, whose title refers to the alias with western echoes, Rawhide (raw leather, like the cowboy series starring Clint Eastwood in the late fifties), with which the secret services referred to Reagan (they call Biden Celticcelta: a Trump, Mogul, tycoon): If the Republican became the first president since Eisenhower to serve two terms in a row, it was obviously because he survived that day and because of the way he and his team managed the crisis. The second conclusion is that they concealed the severity of his injuries.

“He was a 70-year-old man and they didn’t want to give the impression of weakness, even though the bullet lodged near the heart and he lost more than half of the blood,” Wilber recalled last Friday in a telephone conversation. “Even so, he insisted on entering the hospital on his own feet. And that’s when he passed out. They couldn’t detect his blood pressure because it was so low. If they had gone to the White House and not straight to the George Washington, he would have died. Just as the assassination of JFK changed history, the attempt to kill Reagan changed him and his view of things, and ultimately changed the world.”

The reporter recalls that the United States had just seen Robert Kennedy and Martin Luther King die in 1968 and witnessed the assassination attempt on candidate George Wallace (1972); also, that only three months before a lunatic had killed John Lennon, and another was about to kill Pope John Paul II two months later.

And it’s tempting to draw parallels between then and now. It is no longer that the hearings that try to clarify the attack on the Capitol, which are taking place these days in Congress, clearly refer to those of the Iran-Contra, the scandal that ended in 1987 with the image of the president “with a Teflon face ” of Reagan (“although he handled that crisis with much greater intelligence than Trump,” warns Joe Rodotta, who worked in that White House). It is also that the ghosts of political assassination haunt Washington again; just a week ago they arrested a guy near the house in the city of Supreme Court Justice Brett Kavanaugh with plans to kill him. And another man murdered a magistrate in Wisconsin and had a list of future victims that included the Democratic governors of that state and Michigan and the leader of the Republican minority in the Senate, Mitch McConnell.

The March 30 entry in Reagan’s diaries, clearly written afterward, is actually a summary of his time in the hospital. “Getting shot hurts,” she wrote. “When you open your eyes, Nancy [Reagan, su esposa] It was there. I pray that the day will not come when she is not there.” And it did not arrive, the first lady outlived the president by 12 years, who died in 2004, after 12 years of Alzheimer’s disease.

In his diaries (or, at least, in the selection of these made by the historian Douglas Brinkley in 2007), Hinckley appears five times, always in passing, such as in the entry for June 22, 1982, in which he recounts: “I have seen myself with 125 candidates in Congress and I have taken a photo with all of them.” And on his way back he adds: “Yesterday Hinckley was declared innocent because of his madness. A huge ruckus has been created.”

When the judge’s decision to release the man who tried to assassinate her father became known last October, Patti Davis, Reagan’s daughter, reacted in The Washington Post con a tribune: “People’s memories have faded. That volley of gunfire outside the Washington Hilton was a long time ago. I have friends who weren’t even born then. But for me, for my family, for Foster, the memory of that day will never fade. In my mind, I will always picture Hinckley’s cold eyes as he blew Brady’s head off, as he wounded McCarthy, and the Delahanty agent. I will always imagine my father being pushed into the limousine after a gunshot hit him in the lung and almost grazed his heart.”

At the scene, last Friday, the memory also seemed to have faded; it was not possible to find anyone with direct recollections of those events. Although the corner, so photographed in March 1981 (there were two photographers and three cameramen present), has not changed much, except for the plaque, and for a porticoed structure and a parterre that they placed later. The garden area is there, explained a bellman, to avoid the temptation of the curious to gloat in the place from which Hinckley shot Reagan the day he was reborn as president. The leader of a conservative revolution that would change America (and the world) forever.