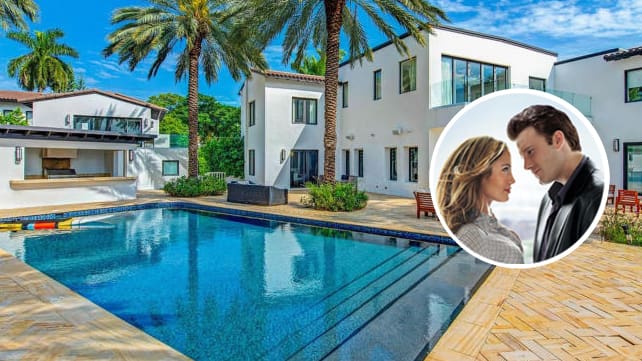 Sun, beach and eleven bedrooms: this villa is the perfect love nest. As photos show, Ben Affleck (48) and Jennifer Lopez (51) stayed together in their rental villa in Miami last weekend. There the couple is said to have rekindled their love, which died in 2004. Before their engagement broke up, the actor and singer were one of the most famous couples in the world – Bennifer.

Now the superstar duo is about to celebrate a love comeback. And Lopez’s villa has more than enough space in which to rekindle love. As “TMZ” reports, the property offers luxury spread over a total of approx. 930 square meters.

The two-story villa has eleven bedrooms, twelve bathrooms, three car garages, a personal gym and a fully equipped spa. Of course, a pool, including a whirlpool, should not be missing. And that although the villa in Miami Beach is actually right on the ocean and even has its own boat mooring.

There is also a large guest house on the property. It is not known whether Affleck will withdraw there during the night. However, he was photographed smoking a cigarette on the balcony of Lopez’s bedroom a week ago.

Lopez – and Affleck – lived in the luxury villa for rent only. The property belongs to the American jewelry designer Paul Morelli. He is said to have flipped a stupid 18 million dollars for it. Before Lopez moved in, the villa was advertised for $ 130,000 a month. The couple are now back in Hollywood and have been photographed on a romantic date. (klm)

See also  Performance review - "Pierrot lunaire" as a performance for everyone