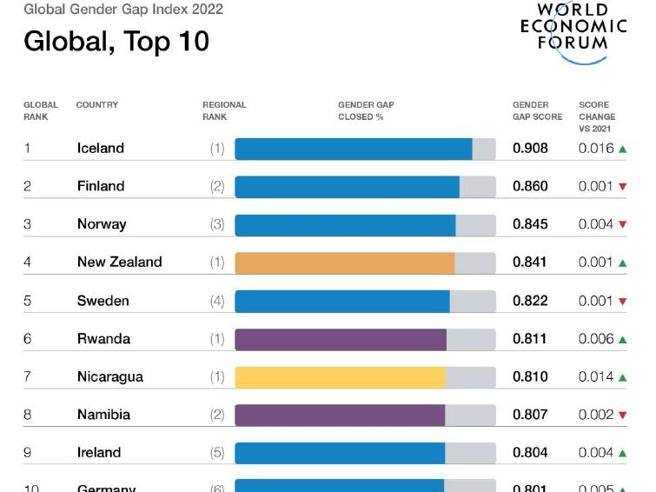 it will take 132 years to bridge the global divide – Corriere.it

At this rate, it will take 132 years to close the gender gap and achieve equality between men and women in the world. Progress to catch up during the pandemic is too slow and the weak economic recovery does not help, after iCovid-19 brought gender parity back a generation, according to the latest Global Gender Gap Report, the annual study published by the World economic forum (Wef).

Iceland remains the country with the greatest gender equality in the world, followed by Finland, Norway, New Zealand and Sweden. L‘Italy, on the other hand, remains firm in 63rd place in the global ranking and at the bottom of the European ranking for the sub-index that measures economic participation and opportunities. The hope is that the investments made by the NRP – which devotes a significant amount of resources to women (and young people) – will help improve the situation.

The primacy of the Nordic countries

Overall, Europe has the second highest level of gender equality, with 76.6%,

after North America, but the region recorded a marginal improvement of 0.2 percentage points from last year, with a 60-year wait to close the gap. If Iceland, Finland and Norway take the top positions globally and regionally, Romania, Cyprus and Greece are at the bottom of the regional ranking. Albania, Iceland and Luxembourg are the three countries that recorded the greatest improvement on a continental level.

According to the report, of the 146 economies surveyed, only one in five managed to close the gender gap of at least 1% in the last year. Thus, the progress made has reduced the time it takes to achieve gender equality by just four years (in 2021 it took 136 years). Before 2020the World Economic Forum estimated that it would take «Only 100 anni» to achieve full gender equality on a global scale

The risk of going back

But now we are in another danger

warns Saadia Zahidi, director general of the World Economic Forum: “The cost of living crisis is affecting women disproportionately, after the shock with the loss of jobs during the pandemic and the continuing inadequacy of the assistance infrastructure. Faced with a weak recovery, government and business need to make two sets of efforts: targeted policies to support the return of women to the workforce and the development of female talent in the industries of the future. Otherwise, we risk definitively eroding the earnings of the last decades and losing the future economic returns of diversity ».

In the 146 countries covered in 2022, the gender gap in health and survival narrowed by 95.8%, the educational level of 94.4%, the economic participation and opportunities of 60.3% and the political empowerment of 22%. At the current pace of progresso It will take 155 years to close the gender gap in political emancipation – 11 more than expected in 2021 – e 151 years for the gender gap in economic participation and opportunities. Although 29 countries have achieved full parity, it will still take 22 years to close the gender gap in educational achievement. And while more than 140 countries have closed at least 95% of their health gaps, the general setback in health and survival means there may be a turnaround.

For the thirteenth consecutive year, Iceland is the country with the highest parity

The States United are at 27th placed with a rating of 76.9%. TOThe last place with the widest gender disparities on the planet finds, unsurprisingly, Afghanistan, preceded by Pakistan, Congo and Iran.

The delays of Italy

As mentioned, Italy is in 63rd place

. Penalized in the first place by the gap to the detriment of women on the economic front, our country is preceded by Zambia and Uganda and followed by Tanzania and Kazakhstan. As in the past, Italy is behind above all in terms of participation and economic opportunities of women, which make it slip in 110th place in the sub-ranking on the subject. In this respect, it is last in Europe and in 114th place (out of 146) for inequalities in wages and 99th for the rate of participation in the workforce. The Peninsula is doing better, but without shining particularly, on the education front (59th place overall from 57th in 2021), while for health, which includes gender-based violence, it is only 108th (it was 118th). Finally, for political power, Italy is in 40th place (from 41st).

Subscribe to Federico Fubini’s “Whatever it Takes” newsletter. Strong data, facts and opinions: the challenges of the week for the economy and markets in an unstable world. Every Monday in your inbox.

And don’t forget the newsletters The Economy Opinions ”