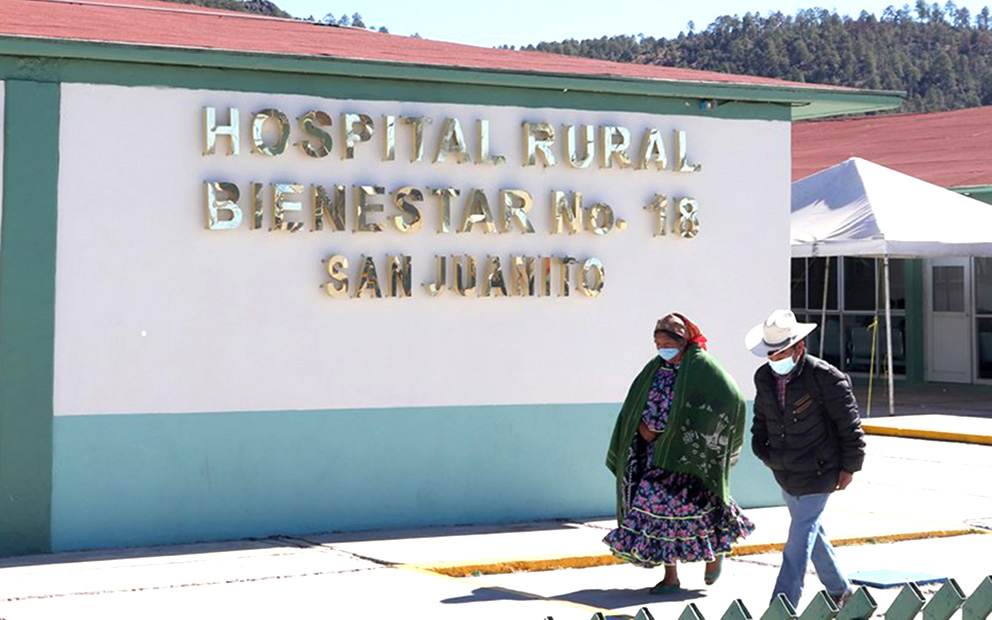 “It is impossible to practice medicine in areas like this”

The murder of the anesthesiologist Masiel Mexia Medina, in the community of San Juanito de la Sierra Tarahumara, contradicts the security guarantees indicated by the Mexican government

The murder on Monday morning of the anesthesiologist at the Rural Welfare Hospital in San Juanito, Masiel Mexia Medina, has dealt a heavy blow to a community long punished by crime and violence, and contradicts the security guarantees put forward by the federal government. which launched a massive campaign this year with the purpose of reducing 44,000 medical vacancies that exist in the country, especially in isolated regions and with a strong presence of criminal groups.

The 38-year-old professional was attacked while she was in her home, in one of the neighborhoods within the town, by a subject who had previously entered another home, armed and in an apparent state of intoxication, according to what witnesses told the authorities. The regional headquarters of the state prosecutor’s office certified the attack at 5:45 a.m. and has reduced its reports after the announcement of search operations for the alleged murderer.

San Juanito is the town with the largest population in the Sierra Tarahumara and as such operates the hospital center that serves not only the inhabitants of the municipality of Bocoyna, but also other communities in neighboring Urique, where two Jesuit priests were murdered on June 20 , a tour guide and a young man who acted as a manager in a baseball game that, according to Chihuahua authorities, would have unleashed the anger of the alleged perpetrator of the attacks, José Noriel Portillo, el Chueco, still a fugitive.

The death of the anesthesiologist occurs at a time when state, military and National Guard forces took possession of that corridor in search of the crooked and with this, nothing has been achieved but the feeling of helplessness.

“It is a terrible thing that is happening. The only thing I can say is that in the village we are very afraid to speak. There is a lot of insecurity that we live not only in San Juanito, but throughout the region. Here, for example, we don’t have the municipal police or traffic because they’ve been killing them for about four years. And of the state police we cannot say that they are a help either, because they are never there.”

“Bertha,” one of the village residents who agreed to speak on condition of anonymity.

Criminals, he adds, are inside and outside of San Juanito, under constant siege. She, for example, about four years ago was robbed of her car by four armed subjects, three of them with their faces covered, armed with rifles and battle gear. The one who seemed to command the assault was a guy dressed in cowboy clothes and with his face uncovered. “The same thing has happened to many and many of the inhabitants here and in the surrounding area. We have denounced it many times and the response has always been the same: a void”.

San Juanito has been oppressed by criminals for years. The level of violence and armed operations by illegal armies have increased in recent years after logging. The greater the criminal presence, the greater the consumption of synthetic drugs, the pandemic that has been sweeping Tarahumara for more than a decade. “It is very sad to see the devastated forests, the illegal logging that no one stops… no one, because everyone is in collusion,” says the resident.

This level of unpunished violence has caused the permanent abandonment of medical personnel, especially since 2008, after Felipe Calderón militarized the alleged attack against groups dedicated to drug and narcotics trafficking. Although the municipalities of the sierra have been the hardest hit by the absence of specialist doctors, the phenomenon extends to the main city of the state, Ciudad Juárez.

In 2009, that border point saw an exodus of doctors that was unprecedented in the country. The professionals were victims of extortion, kidnapping and murder while public security was in charge of the disappeared Federal Police. The doctors blamed just the elements of the corporation for being involved in the attacks. No one was investigated or prosecuted, despite the fact that an internal revolt ended in public accusations between police and high-ranking officials.

“The murder of this doctor is a tragedy that once again mourns the medical profession and highlights the serious presence of violence in our state,” says Dr. Leticia Chavarría, a member of the Citizen Medical Committee, a front that emerged just in the context of the kidnappings and murders of health professionals in the middle of the “war” against drug traffickers. “The Sierra de Chihuahua is a land without law, which takes lives in total impunity as we have seen in recent days, with the murder of the priests and now with that of the doctor.”

See also  Amy Samir Ghanem on her mother's health condition: Please pray for my mother.. she is tired, Lord

Chavarría recalled the death, on July 15, 2010, of the doctor José Guillermo Ortiz Collazo, during the attack with a car bomb that also killed a couple of police officers, on that border.

“The violence continues and we continue in the midst of a circle of death and impunity where injustice remains and it seems that it is here to stay. Under these conditions it is impossible to practice the profession in areas like this, without law, because there are no police forces to enforce it. Pain, indignation and anger are feelings that today surround the entire health sector”.

The conditions described by Dr. Chavarría are indeed old. In 1994 a doctor who asked to reserve her identity had to do her social work at a medical center in the community of Cieneguita de Trejo, in Urique.

“An individual entered my health center at night,” he says. “I managed to get out through a back window and a nurse who lived in the community gave me shelter. I reported what happened to the authorities and they only changed my community. My superiors in turn told me that the same thing had happened to them, but that there was no problem. Insecurity has existed in the area for a long time and despite this, no action is taken and doctors continue to be sent without any protection”.

The doctor is head of unit at a specialty hospital in the city of Chihuahua, held a meeting on Monday with other colleagues in the area. The murder moved them, as well as outraged them. “The authorities do not pay attention to the high risk of carrying out a social service in isolated, remote and above all violent areas,” she says.

See also  They used in Health for payroll 3.8 million pesos of support for children under 6 years and Chihuahua Crece Contigo 2020

The State Prosecutor’s Office issued a press release this Tuesday in which it reported the appearance of a subject tied to a post, within the same municipality. He was severely beaten and with an Ak-47 rifle next to a cardboard with a written message: “This happened to you for having killed the doctor and raped a girl.”

The authority reserved the identity of the individual and only said that he is hospitalized. It does not clarify if it coincides with the characteristics provided by witnesses to the crime.

Independent journalistic portal, made up of a network of national and international journalists who are experts in social and human rights issues.