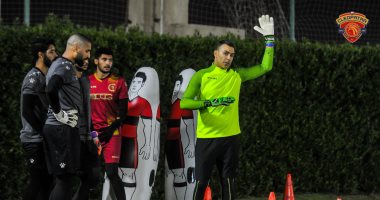 Issam El-Hadary, the Ceramica goalkeeper coach, revealed that he is the first member of the team to attend group training, explaining that he used to attend training early to set an example for the team.

Al-Hadary said, in exclusive statements to “The Seventh Day”: “There is nothing to prevent me from my work. “.

He added, “We are playing 3 friendly matches against Al-Ahly Bank, Vanguard of the Army and Military Production, with the aim of preparing the players to resume the league after the interruption period, and we always focus on friendly matches so that the team does not stray from the sensitivity of the training.”

Regarding Ceramica goalkeepers, the Egyptian football legend said: “All Ceramica’s goalkeepers have great talent and development. Their persistence on the same level of diligence and focus will make them brilliant names in this position in Egyptian football.”

The High Dam, Essam El-Hadary, goalkeeper of Al-Ahly, Zamalek and the former national team, celebrated the engagement of his daughter Shadwa in a ceremony held in a major hotel in Cairo, in the presence of the newlyweds’ families and a number of Egyptian football stars and art stars.

Essam El-Hadary greeted his fans, through his personal page on the social networking site “Facebook”, where he wrote: “Words are unable to thank you and my tongue cannot describe my joy in sharing with me our joy in the engagement ceremony of my daughter Shadwa and my dear beloved Omar Tariq Al-Azab, God makes all your days and I thank those who Attend, and those who did not attend, your children will all come.”

See also  Al-Ahly doctor: Afsha's condition is reassuring... and his response to treatment is fast