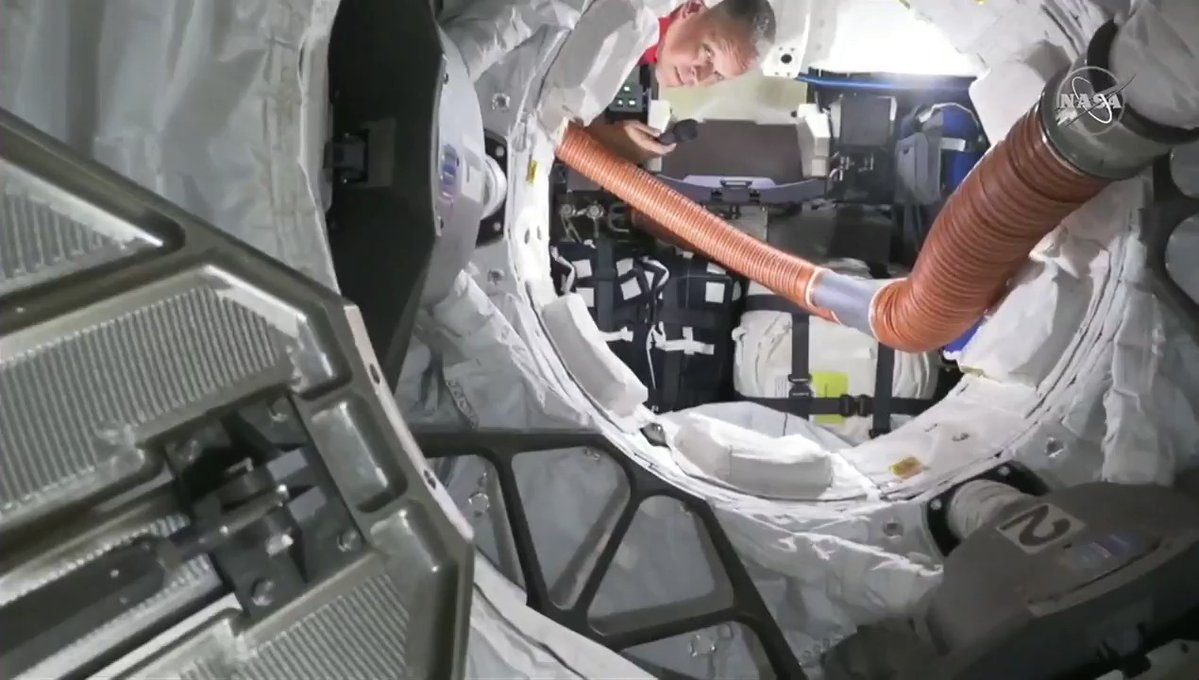 ISS astronauts enter the Starliner spacecraft after opening the hatches

Last Friday (20), just over 24 hours after launch, Boeing’s Starliner capsule arrived at the International Space Station (ISS), where it will remain docked for four or five days until it returns to Land for a parachute landing in New Mexico.

And the person responsible for opening the hatches between the spacecraft and the orbiting laboratory was NASA astronaut Robert Hines. This happened the next day, Saturday (21), at 1:04 p.m. (Brasilia time).

NASA astronaut Robert Hines, who opened the hatches between Starliner and the International Space Station, walks around the capsule. Image: NASA Television

“We currently have three human-grade vehicles docked to the space station,” Hines said, referring to Starliner, SpaceX’s Crew Dragon and the Russian Soyuz capsule. “So this is an important day in NASA’s history, paving the way for the future as we begin to conduct commercial flights in low Earth orbit, allowing travel to the Moon and eventually Mars.” »

The docking with the orbital laboratory, scheduled for 8:10 p.m. (GMT), finally took place at 9:28 p.m. Indeed, just before 6:50 p.m., when the spacecraft was 180 meters from the ISS, controllers evaluated the capsule’s tracking and performance data and estimated that it would be in an inadequate position, requiring a maneuver. of retirement.

At 8:52 p.m., after reporting a new forecast for the capsule to dock at the outpost at 9:01 p.m., controllers reported “a minor problem” with the docking system, which further delayed the process. According to NASA, it took removing the Starliner hitch ring and resetting it to figure out the problem.

Additionally, during the orbit insertion process, just over half an hour after liftoff, two of Starliner’s thrusters failed to fire as expected. The first failed after just one second. Your backup triggered immediately but also failed after 25 seconds. This activated a tertiary booster backup, and the pod was able to complete the crucial burn without incident.

“That’s the kind of stuff we expect in flight testing and that’s why we test,” Hines said Saturday. “If we don’t encounter things like that, we’re probably doing something wrong. »

At a post-launch press conference Thursday night, representatives from NASA and Boeing reaffirmed their confidence in Starliner to complete its mission, regardless of propellant issues.

“The system was designed to be redundant and it worked as expected,” said Mark Nappi, vice president and director of Boeing’s commercial crew program.

The Starliner capsule took the mascot to the International Space Station

Over the next few days, crew members aboard the ISS will collect the 226 kg of supplies Starliner took to the orbiting lab and then pack its hull with nearly 270 kg of cargo to return to Earth.

Although Starliner’s Orbital Flight Test-2 (OFT-2) mission was unmanned, the spacecraft does have one “passenger” on board: it’s mannequin Rosie, affectionately referred to by the creators of “Rosie, the Rocketeer.” “.

Rocketeer is an English term that refers to a kind of “engineer” or “scientist”, whose main job would be the design, operation or launch of rockets. Dressed in one of Boeing’s blue suits, Rosie was strapped into the command seat of the Starliner.

It is equipped with sensors to measure the gravitational forces felt on the body during flight and the effects of these same forces on the capsule seats during re-entry into the Earth’s atmosphere and landing.

Also with Rosie was a plush toy depicting Jebediah Kerman, one of the original four “Kerbonauts” featured in the Kerbal Space Program (KSP). Jeb, as the character is better known, served as a zero-G flight indicator.

Ever since Russian cosmonaut Yuri Gagarin took a small doll with him on the first manned spaceflight in 1961, it has become a tradition for most space crews to carry plush toys inside the spacecraft.