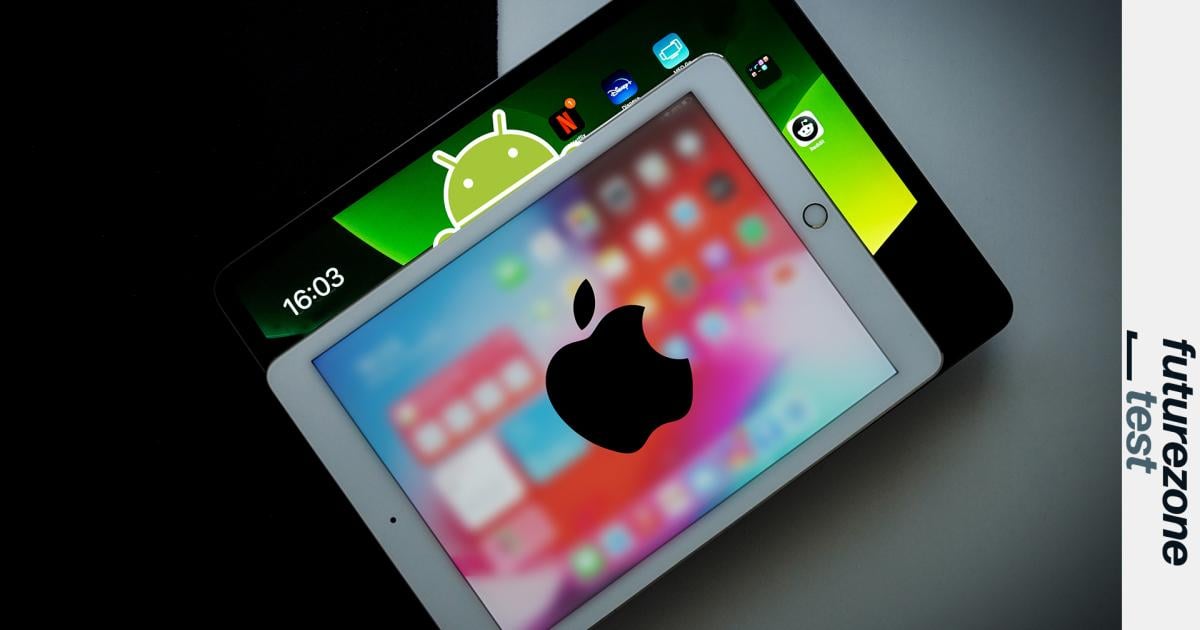 iPad vs. Android tablet in the test: The apps in comparison

Comparison images from numerous apps show the difference between Android tablets and iPads.

Some applications look really ridiculous on an Android tablet.

has for years Google with his Android operating system entered the tablet market more or less without a fight against the competition from Apple leave. While with Apple’s iOS respectively iPadOS the vast majority of apps have been optimized for the larger tablet screen, you miss such efforts in Google’s Android ecosystem.

In this respect, it is hardly surprising that Apple the tablet market with a market share of 34.2 percent (2021) dominates. Samsung comes to 18.3 percent, Lenovo to 10.5 and Amazon with its Fire-Tablets to 9.5 percent.

Tablet market is gaining in importance

Since the beginning of the corona pandemic, the tablet market has picked up speed again. So now also offer Nokia, Xiaomi and realme comparatively cheap devices. Google has also stated that Android apps should be better optimized for tablets in the future. So you can be curious.

We took stock and looked at how the different applications on a Android-Tablet (Xiaomi Pad 5) look and like the same apps on one Apple iPad (2021, 9th Gen.) – with numerous comparison images.

First of all, it is striking that very few applications are optimized for Android tablets. The vast majority of Android apps were made for this Smartphone-Format developed and are on a tablet just inflated and correspondingly larger.

In this respect, the best way to drive an Android tablet is to use it in the portrait uses. However, if you prefer your tablet in the landscape used, you will quickly find that numerous applications do not make optimal use of the larger screen and that the user experience is sometimes dreadful. 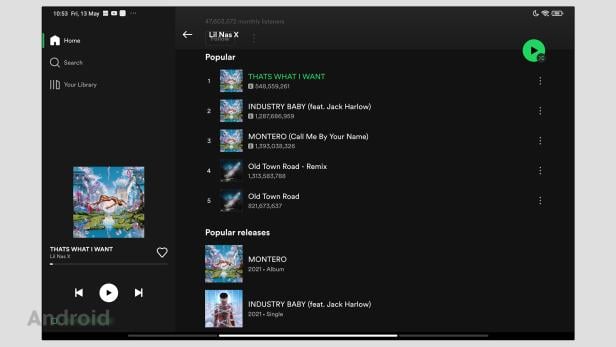 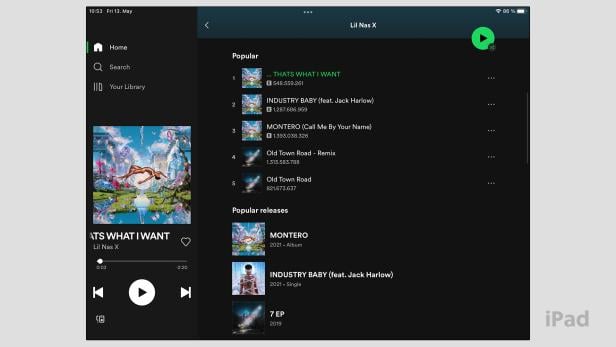 Apple, on the other hand, has its 2019 mobile operating systems in iOS for iPhone and iPadOS split for iPads. Not least because of this, the applications can be developed more precisely for smartphones and tablets.

This is noticeable, among other things, that the apps look more coherent on an iPad and use the extra screen space more efficiently. For example, some applications on an iPad – as opposed to an iPhone – have a additional sidebar for better navigation or further information. 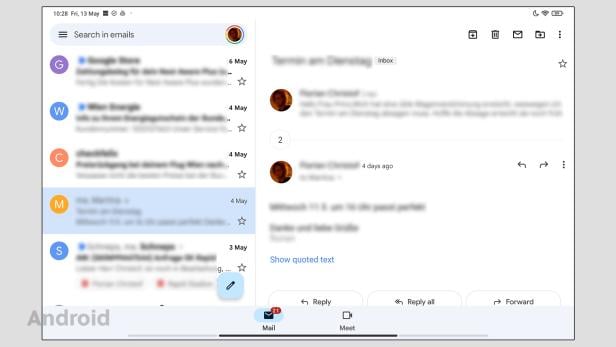 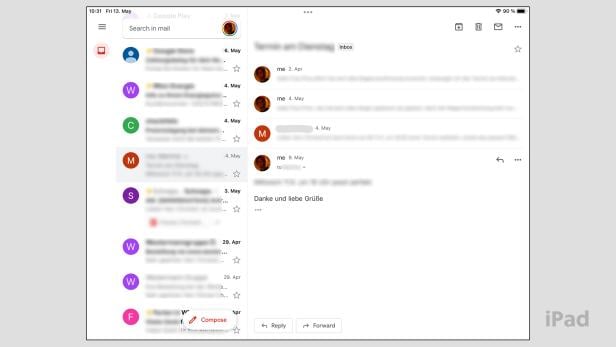 Die Gmail-App is well implemented on both tablets

But not everything is terrible about Android tablets: There are, for example Gmail, Google Maps, Spotify, YouTube and also Geizhals optimized for tablet screens. Compared to the smartphone version of the apps, an additional navigation bar on the side ensures a better user experience. These apps are implemented similarly on an iPad. 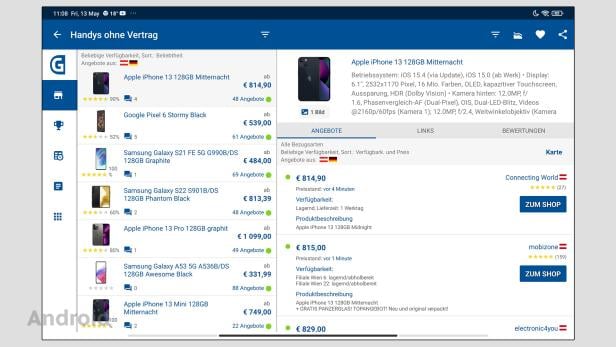 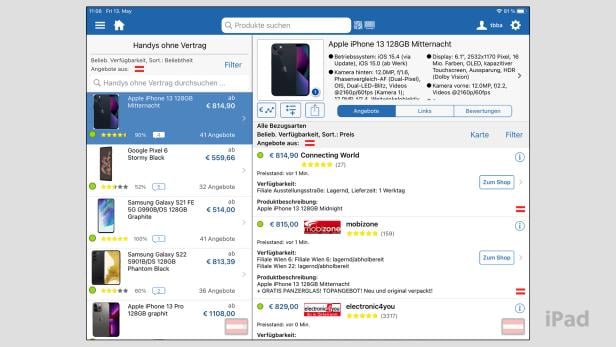 For some applications, it seems as if the developers didn’t put any special effort into either the iPad or the Android tablet version; for example at AirBnb, Feedly, Google News or I want to havesuch as Sonos, Google Drive, Pocket, Lieferando, Checkfelix, Zalando and H&M.

These applications offer in tablet format no added value and are easy enlarged versions of the smartphone apps. On an iPad, however, this hardly has a negative impact on the user experience because the apps are always displayed in smaller parts. 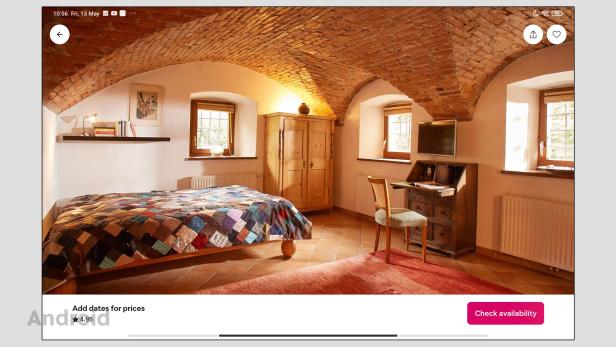 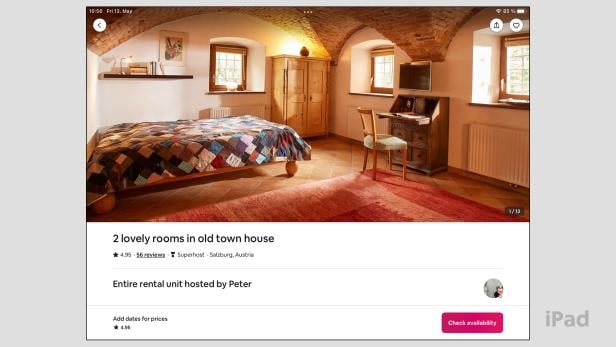 With the Airbnb app, the screen area is not used optimally

In this respect, on one iPad more content is played in the same space, making the applications appear much clearer and tidier. On the Android-Tablet on the other hand, the same content is displayed much larger, which seriously affects the clarity.

For those who mainly use a tablet in landscape mode, it is quite annoying that some apps only in portrait format can be used; for example the H&M app on an iPad and on an Android tablet. The Zalando application can also only be used in portrait format on Android. 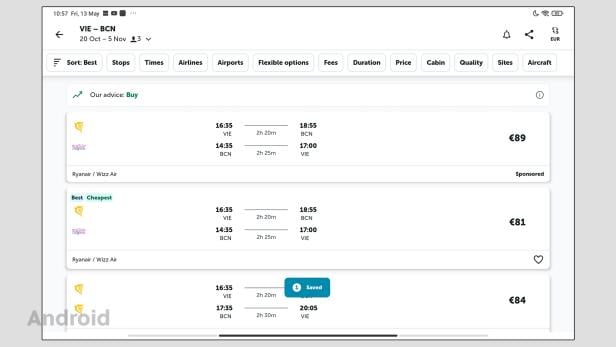 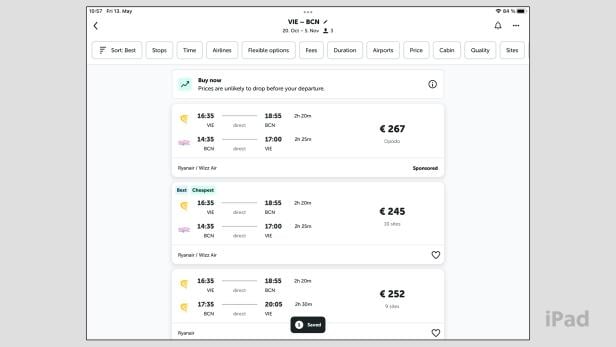 Die Checkfelix-App benefits from the smaller display on iPads

Most social media are optimized for smartphone screens and cannot easily be displayed in landscape format on a larger display. Most notably, Instagram, TikTok, and Reddit are both on an Android tablet and an iPad only hard to bear: Either the postings are displayed in oversize (Reddit) or the app imitates a smartphone screen (Instagram) and simply leaves the rest of the screen black. 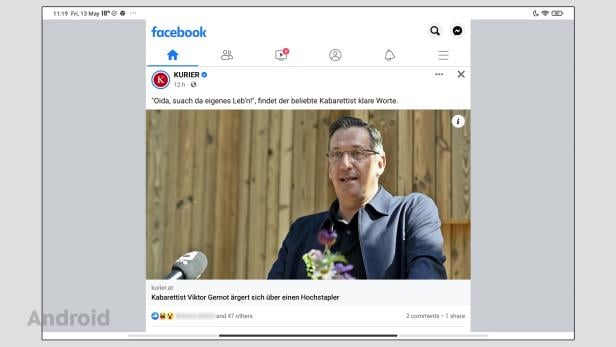 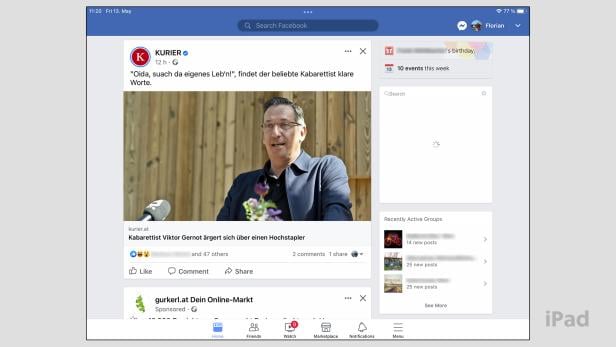 On Android they are Twitter– and Facebook-App just as easily inflated, which completely disintegrates the design: images, videos and text are oversized and just plain hideous. on one iPad However, the two apps are much better implemented – with a sidebar and other elements. The display size of images and videos is also adjusted accordingly. 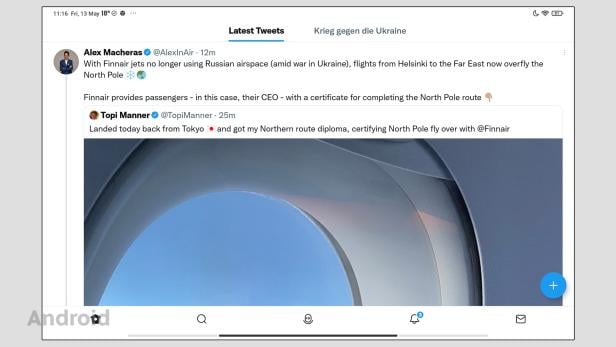 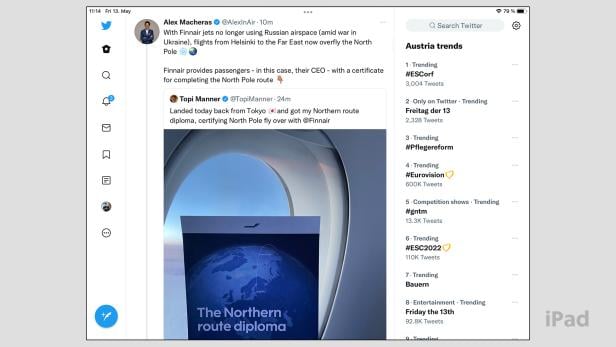 The Twitter app on an Android tablet is almost useless

Amazon app wastes too much space

A negative example for apps on an Android tablet also provides the Amazon-App With the online retailer, everything is displayed much too large, so that the clarity is lost. On an iPad, however, the content of the Amazon app is displayed efficiently according to the space available. 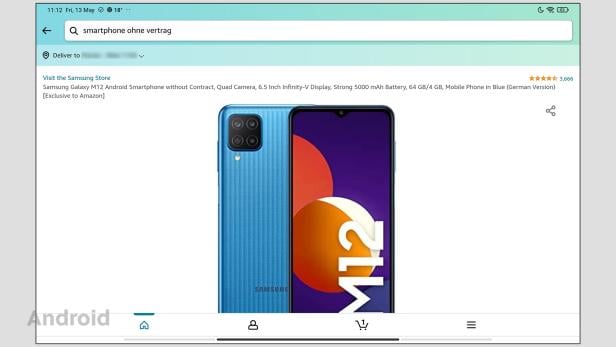 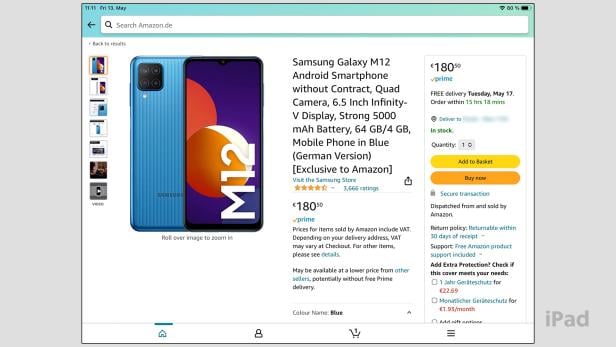 Die Amazon-App: The comparison pictures speak for themselves

The next negative example

Football fans could stumble across another negative example. On an iPad there is about at the Soccer app FotMob a sidebar for additional information. This does not exist on Android and the content is simply displayed inflated, which causes the Design shot of the app becomes. 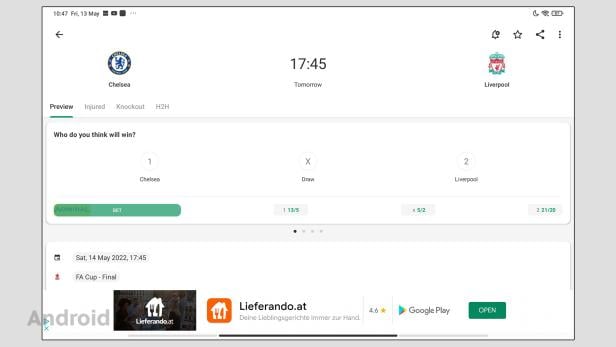 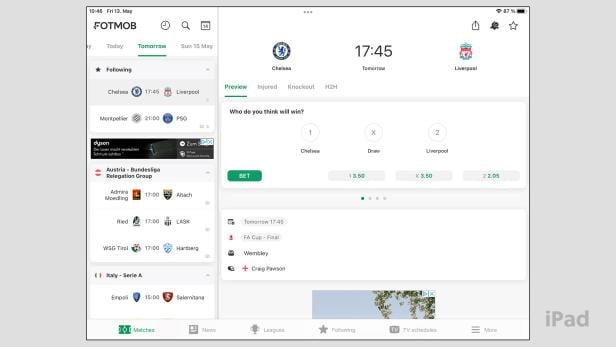 Ikea app with a bad overview

Also the Ikea Android app is one of those apps that are examples of poor implementation. The screen area is not used optimally on the Android tablet: The search results are displayed far too large and offer a poor overview. 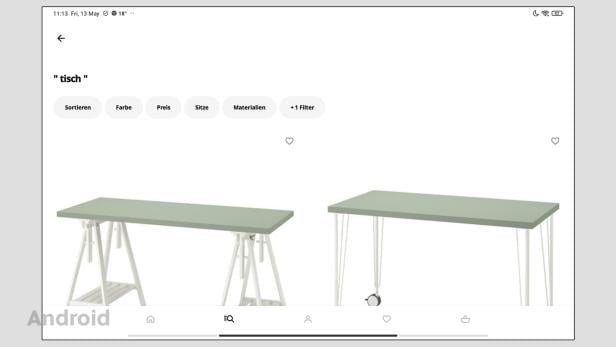 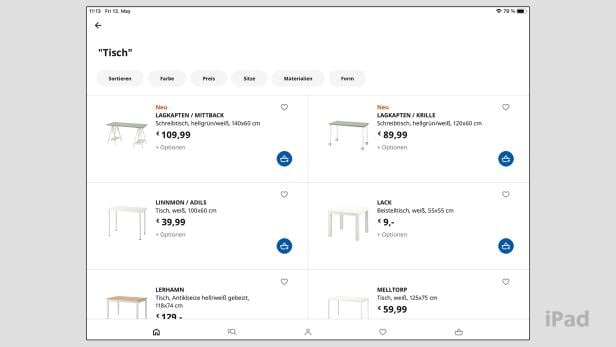 Ikea App: The clarity of the search results is not given on the Android app

Not surprisingly, the comparison of the individual apps shows that this iPad with a much better user experience can score. Many applications are optimized for iPad displays and offer additional information and navigation bars. Even without extra elements, the content on an iPad is displayed in smaller parts, which means that clarity is maintained.

Although there are some exceptions, they are Android-Apps on a tablet not much more than cloned smartphone applications. The larger screen tends to make content easy only shown largerwhich makes things difficult for the design, the clarity and ultimately the user experience.

It remains to be hoped that Google will make its announcements true and pay more attention to the Android tablet segment in the future. Otherwise Android tablets will not have their determination as Gaming- und Video-Streaming-Devices can outgrow.

For the comparison test we have a Xiaomi Pad 5 and a iPad (2021, 9th Gen.) used, which have a similarly sized screen. Mainly we have that Landscape-Modus used.

In the selection we have included applications that belong to the most popular and widespread apps belong. We have completely refrained from professional applications, which are mostly only available for iPads.

By the way: None of the setting options on the Android tablet (accessibility, display, display size, font size) lead to a better display. The layout design in the apps always remains the same.