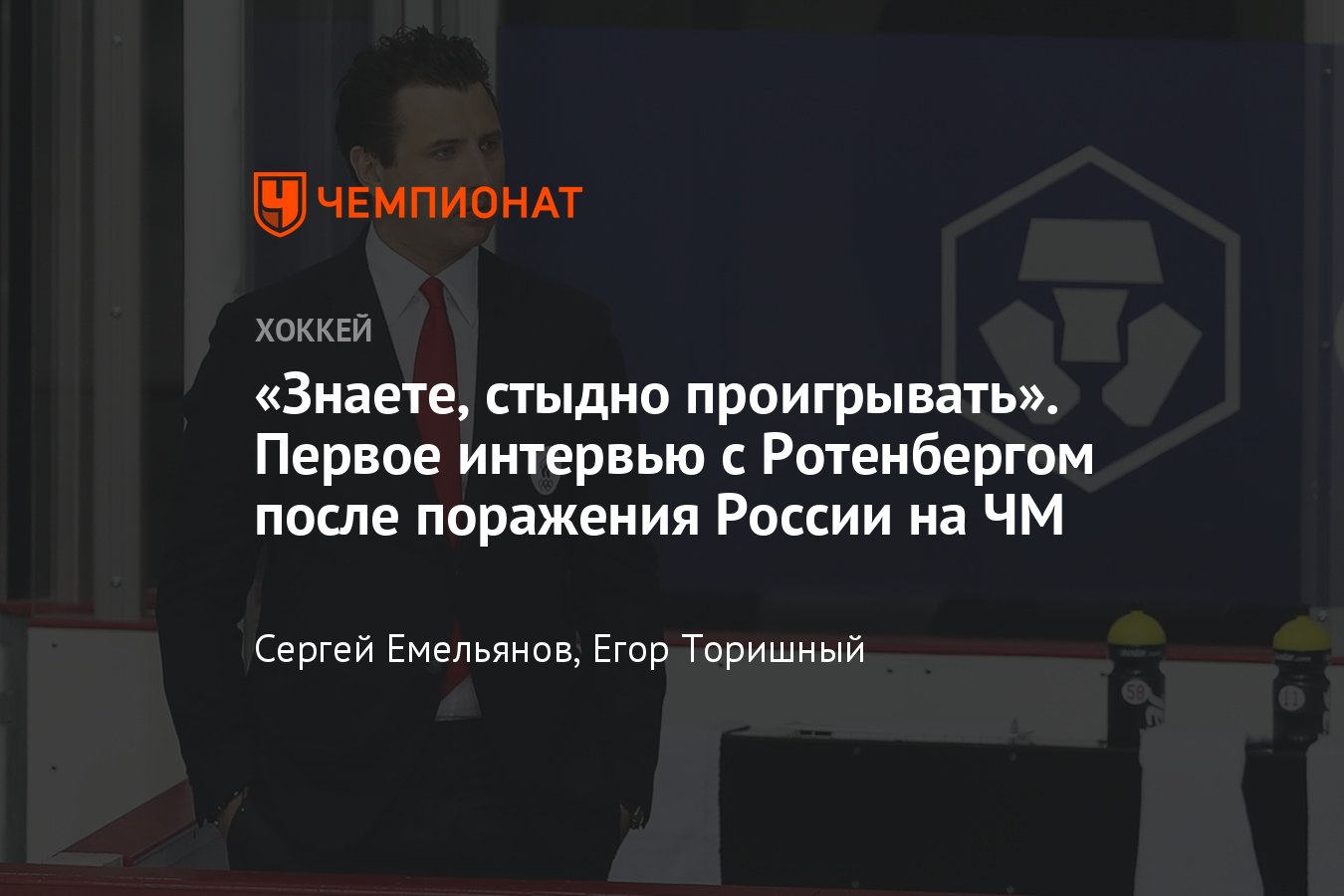 On June 8, before the season closing ceremony, a meeting of the KHL Board of Directors was held in Moscow, after which the vice-president of the FHR and SKA, the head of the Russian national team, answered questions from journalists Roman Rotenberg… The main topic of conversation between the functionary and the press was the defeat of our team from Canada and the elimination in the quarterfinals at the World Championship held in Riga.


KHL introduced new regulations. The main results of the meeting of the leaders of the clubs

“Russian players and coaches are no worse than Canadians”

– At the World Championship, we have gathered the best players possible. We played, for example, all the defenders from the top NHL clubs.

– But in the national team, for example, there was no SKA top scorer Vladimir Tkachev.
– We worked with him all season, talked. This question, of course, can be discussed. But if we look at the formation of the team, then all these players were on the national team during the season. The same Tkachev was at the Channel One Cup, in full view of the coach in SKA and the national team.

We missed Mamin very much, we counted on him. He closed the minority with Karnaukhov together. I have before my eyes a match with the Swedes from the Channel One Cup, where Mamin played the most in overtime. We didn’t have enough of such a player, he was injured.

– The Russian national team has excellent personnel work, everyone comes to it at the first call. How to strengthen the coaching staff before the Olympics?
– We discussed it, yes. The coaching staff worked with this squad throughout the season, someone went to Eurotours, someone stayed at the club. Once again: the head coaches of other KHL clubs cannot go to Eurotours. We communicate with the coaches, but the same Bragin is constantly on the ice, sees all the candidates, works more than 60 matches a year. He is not somewhere abroad, he sees everything with his own eyes. As for the hockey players who come with pleasure, this is our personal relationship with everyone, we keep in touch.

– Is it possible, for example, to come to an agreement with Mike Babcock to be a consultant for the Russian national team?
– There is logic in your question. We were just discussing this situation: overtime in the quarterfinals and, in general, our losses to Canada. Yes, overtime is their strong point because they have skating and skill. They are taught from childhood to keep the puck. We also have such players. It turns out that our coaches and hockey players are no worse than Canadians. But Canadian coach Gallan has worked in the NHL throughout his career, was in such stressful situations. 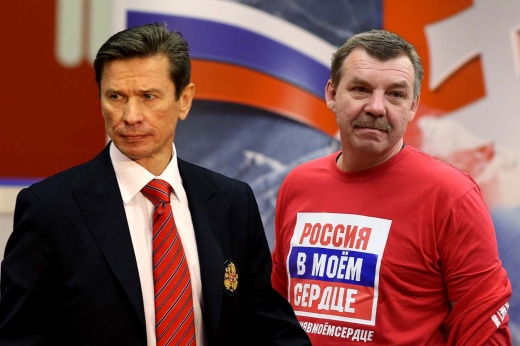 Duet Bykov – Znarok and authoritative assistants. What should be the headquarters of the Russian national team at the Olympic Games

“We are in constant contact with Panarin. We will discuss the Olympics when we receive information from the NHL “

– The Olympics is a tournament according to the rules of the NHL, with a small area …
– We would very much like to play the last World Championship on a small court, because we played on it all season.

– In fact, it will be the Chinese World Cup, all the stars will come.
– We still need to get official information about this. We are waiting for confirmation. Only the NHL and the IOC can officially announce. When this happens, we will sit down with the coaching staff to discuss all the nuances.

– How to solve the big problem with the center forwards? It is clear that there is Morozov, who became the sixth in face-offs in the entire World Cup, but …
– Here we come to this point again. Morozov lost that throw-in in overtime when we were scored, and he was supposed to be replaced by Voronkov, but he did not. As for the deficit of centers, we are playing with them. Voronkov, Karnaukhov, Kamenev … They played those they could. Let’s wait for information from the NHL. But we have an understanding who can go to the Olympics anyway.

– Panarin doesn’t want to come to the national team because of his troubles? Or do you have contact with him?
– After such a difficult season, he decided that he had better rest. And we took it with understanding.

– Does he keep the Olympics in mind?
– We will discuss the Olympics when we get information from the NHL, again. And so Artemy and I are in constant contact.

– Will Gusev go to the Olympic Games for sure?
– We hope he will be healthy. This is the man who scored two goals in the Pyeongchang final, scored four points in that match. Of course, we will talk to him. I don’t think he has any kind of depression in the NHL. Maybe he just didn’t find his coach.

See also  Why didn't you get vaccinated?

– Dmitry Yudin did not make it to the national team because he did not sign a contract with SKA?
– This is gossip, it’s hard to comment on them. Yudin played in the SKA system for a long time, and we discussed with Ak Bars, not with him, his future. Dmitry did not play at the World Championship solely because of the high competition in the defense line.

“Rosenbaum didn’t write anything like that. He said about a disservice to hockey players, this is the only meaning “

– Is the defeat from Canada the most painful in your career?
– The most painful is always the last defeat. Of course, we did not expect such a result. Everything was decided by the nuances. We were leading 1: 0, we wanted to bring it to victory, but …

– How do you react to the assessment in the media, where they write that this is a failure and shame?
– You know, it’s a shame to lose. Better to win.

– Why did you like Rosenbaum’s resonant post?
– He didn’t write anything like that. Yes, he said he was doing a disservice that Canada is not Uganda. That was just the point. Disservice to players. You see, when a hockey player is in a “bubble”, this is already an unusual atmosphere, and then there is a stream of news – we don’t take phones away from the players. When the press writes that this is not Canada and that it would be shameful to lose to it, it affects the players. They read everything anyway. The USSR national team did not have telephones, no one could influence the team from the outside, there were only internal meetings. We have a rule that hockey players do not use their phones on match day. But this is the only form of communication with family, with friends, and it is wrong to deprive it of it on a permanent basis.

They say a lot now about the coaching staff, about weak assistants. And you ask the players! Orlov came from the NHL, ask him how Laviolette conducts meetings in Washington, and how it happens with us. He will not say politically correctly, but honestly. 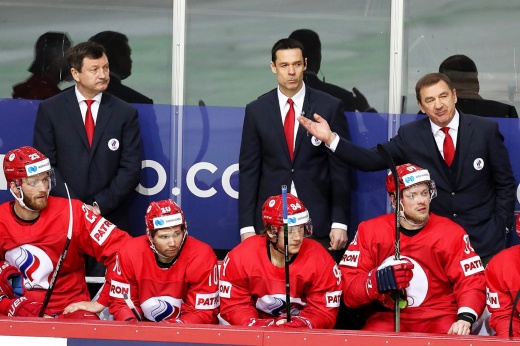 Cowardly hockey with Canada is just a consequence of systemic problems. What is wrong with the Russian national team

– But when Slepyshev says that there were no 3 vs 3 overtime schemes, it’s strange.
– There was a focus on this format – to keep the puck and shoot only when there is a one hundred percent chance. This is how they play at CSKA, and all the teams do.

– It turns out that with Canada we saw the failure of the installation, the same Slepyshev and Tarasenko were throwing from unobvious positions?
– That’s right, it is. This is the decision of the players, they made it themselves. In overtime, everything was exactly the opposite of what the coaches said: they did not hold the puck, they were shooting at goal, Canada had control. But if we are talking about a goal conceded, then this is an individual mistake. Everyone had to play with everyone, the coaches did not exactly tell the hockey players not to return to defense. All returned, but did not disassemble the rivals.