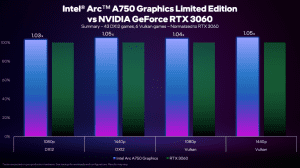 The Arc A750 was developed by Intel as a mid-range graphics card. A few days ago, the manufacturer himself gave a glimpse of the performance in Control. Of course, the results of just one title should be treated with caution. Now Intel wants to demonstrate the performance on a much broader basis.

This is particularly revealing because previous impressions suggest Intel is dependent on optimized titles. One even speaks of “Tier 1 Games”, in which the strengths of the Arc graphics cards are exhausted as much as possible and a corresponding performance level can be reached. These include, for example, F1 2021, Cyberpoint 2077, Borderlands 3 and Fortnite.

At this point we want to show you a YouTube video. However, the protection of your data is important to us: by embedding and playing YouTube, YouTube sets cookies on your computer with which you can be tracked. If you want to allow it, just click the play button. The video is then loaded and then played.

For a new text and video contribution, Intel has now tested the Arc A750 in nearly 50 games. The focus is on titles that support a modern API such as DirectX12 or Vulkan. Specifically, 43 DX12 and six Vulkan games were selected. It was tested in 1080p Ultra and 1440p High – against a GeForce RTX 3060. Both graphics cards ran on a system with an Intel i9-12900K, an ASUS ROG Maximus Z690 Hero and 32 GB of DDR5 memory. If available, the internal benchmarks of the games were used. Otherwise, Intel used repeatable scenarios.

Intel itself sees an average performance advantage of 3 to 5 percent for the Arc A750 compared to the GeForce RTX 3060. They are also confident that other games with a modern API will also offer convincing performance. However, this begs the question of how the execution is in older titles.

Typically, manufacturer benchmarks should be treated with caution. However, the large number of games tested at least ensures that Intel didn’t just pick a few games in which the Arc A750 is particularly brilliant. Nevertheless, prospective buyers should of course wait for independent tests. This is all the more true because the topic of software problems may accompany Intel for a while yet.

Intel promises more information about the launch of sales, pricing, architecture details and features like XeSS in the future.