One would have to smile for a whole month to watch the reaction of the Wall Street psychopaths yesterday, when the altar boy Biden told them that the pusher always remains the same, Jerome Powell, confirmed as head of the Fed. The vineyard above of the legendary Rich , reminds us that Powell is like plastic, recyclable, malleable, which unfortunately is not… transitory, like inflation and we will have to put up with it for many more years.

It is a false hawk, like the pongo, easily malleable, Biden knows it well.

In the end, he didn’t listen to Warren calling Powell a dangerous man, also citing as an example the psychopathic governors who played the stock market while making decisions on the skin of Americans, pointing out how Powell was sleeping in the meantime.

After all, Trump also modeled him in his own image and likeness.

“I am confident that Jerome Powell and Lael Brainard’s focus on keeping inflation low and prices stable,” as well as their commitment to full employment, “will make our economy stronger than ever,” Biden said.
The reaction from Wall Street was immediately positive. Nasdaq and S&P 500 have updated their records.

In fact, even the dollar has updated the new annual record approaching 1.12 as we have said several times in recent months.

Biden will be able to appoint 3 more doves to replace other upcoming governors in the coming weeks, which is a blessing for Machiavelli’s friends. Mr. Biden will announce these appointments in early December, the White House said Monday.

2 are Biden’s men, 1 Powell will necessarily become one, then he will add 3 more.

WASHINGTON (Reuters) – Biden asked some of the world’s largest oil consumers – including China, Japan and India – to consider putting their crude reserves on the market pic.twitter.com/ME670ahCxu

Meanwhile, after Japan’s willingness to release some of its oil reserves, Biden is expected to make his statement today.

A few days ago, OPEC rejected pressure from US President Joe Biden to extract far more oil and lower gasoline prices for American motorists, deciding to stick to their plan of cautious monthly hikes.

So remember the oil goals we shared over the weekend with our Machiavelli.

But now we come to a pearl that does nothing but confirm that the water is wet as only we at Icebergfinanza have told in recent months, while almost all analysts, economists, consultants and journalists, the entire market, suggested that you escape. from fixed income because rates would have exploded! 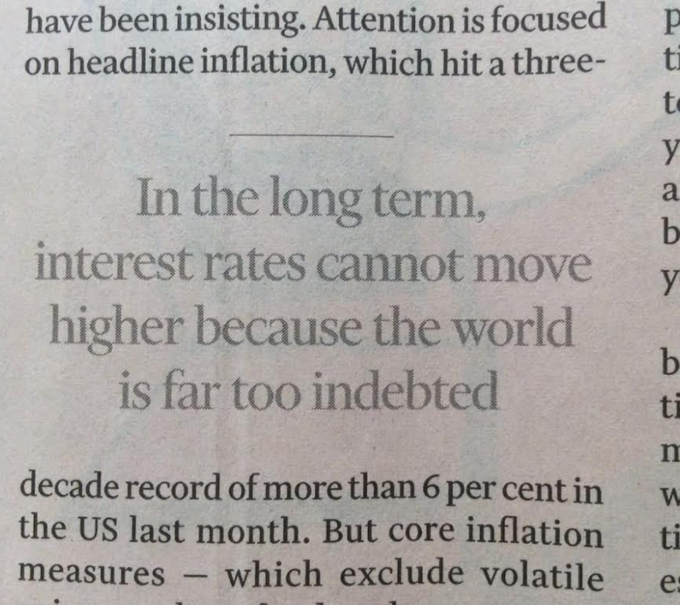 In the long term, rates cannot rise, there is too much debt in circulation, this sentence tells you nothing, the word debt deflation says nothing to you, pass if a suburban blog suggests it, but maybe if the Financial Times tells you so. , perhaps…

There is no easy escape from the global debt trap https://t.co/ndEDAmJYyb pic.twitter.com/qgqxP4cVYL

The writer, chief global strategist at Morgan Stanley Investment Management, is the author of “Ten Rules of Successful Nations”

One of the great mysteries of the global economy is why, although inflation is returning strong, long-term interest rates have barely moved in recent months.

So far, analysts have explained this strange market behavior as a symptom of the pandemic, driven by fear of another surge in cases, or by massive asset purchases by the central bank or, more importantly, by the belief that the current peak of inflation is temporary.

None of these explanations hold up well in light of recent data, but there is an explanation that does:

the world is in a debt trap.

Over the past four decades, total debt has more than tripled to 350 percent of global gross domestic product. As central banks lowered interest rates to recent lows, the easy flow of money into stocks, bonds and other assets has helped scale global markets from the same size as global GDP to four times as large. Now the bond market may perceive that the debt-drenched, asset-bloated global economy is so sensitive to rate hikes that any significant hike is simply not sustainable.

At the peak of the crisis, the US Federal Reserve was buying 41% of all new Treasury issues, but long-term yields remained close to all-time lows even after the Fed and other central banks began reporting early. their plans to cut back on their purchases. In addition, central banks are buying bonds of all maturities, so why are rates now only going up for short-term bonds?

(…) Yet the 10-year government bond yield is now well below the inflation rate in any developed country. The market is likely to sense that, whatever happens to inflation and growth in the short term, interest rates cannot rise in the long run because the world is too indebted.

As financial markets and total debt grow as a percentage of GDP, they become increasingly fragile. Asset prices and the cost of debt servicing become more sensitive to rate hikes and now pose a double threat to the global economy. In previous tightening rounds, major central banks have generally raised rates by around 400-700 basis points.

Now, a much milder tightening could cause economic problems for many countries. The number of countries where total debt exceeds 300 percent of GDP has increased over the past two decades from half a dozen to two dozen, including the United States. An aggressive rate hike could also deflate high asset prices, which is usually deflationary for the economy as well. These vulnerabilities would explain why the market seems so focused on the “policy error” scenario, where central banks are forced to sharply hike rates, triggering the economy and ultimately pushing rates down.

Indeed, the world is stuck in a debt trap, which suggests that while the refusal of long-term rates to rise significantly is new and unexpected, it might even be entirely rational.

See also  Alfa Romeo GTV: it can return as an electric car

There is nothing else to add we were the only ones in Italy, no one else to suggest you to rest assured that long rates would never rise above a certain level, to suggest to those who were willing to seize yet another opportunity this spring and we are now well over 15% performance from the lows.

But the big opportunity is only at the beginning, thanks to all those who have trusted us, alone as always against the tide against everyone, in the obstinately contrary direction, but with solid empirical and analytical foundations.

In OUTLOOK 2022 we will share the objectives for the next few years, the great winter is about to return.

The manuscripts from the beginning of the year are more than enough to understand how to seize it, the last great opportunity, the most colossal in history, because today they are all on the wrong side of a boat that is about to sink again.

I remind all those who need that ICEBERGFINANZA is also a 360 degree consultancy, in the midst of this perfect storm.

By clicking on the link below and sending an email to [email protected] it is possible to have strategic advice on possible macroeconomic and financial developments in the coming months, as well as to receive our manuscripts. Good day Andrea

Anyone wishing to support our trip will receive Machiavelli’s analyzes for FREE. To contribute to our journey just click ON THE BANNER next to the posts on the right side of the page or go to the DONATIONS section …

See also  Airlines in Colombia: the routes that American Airlines offers from this month - Semana Magazine