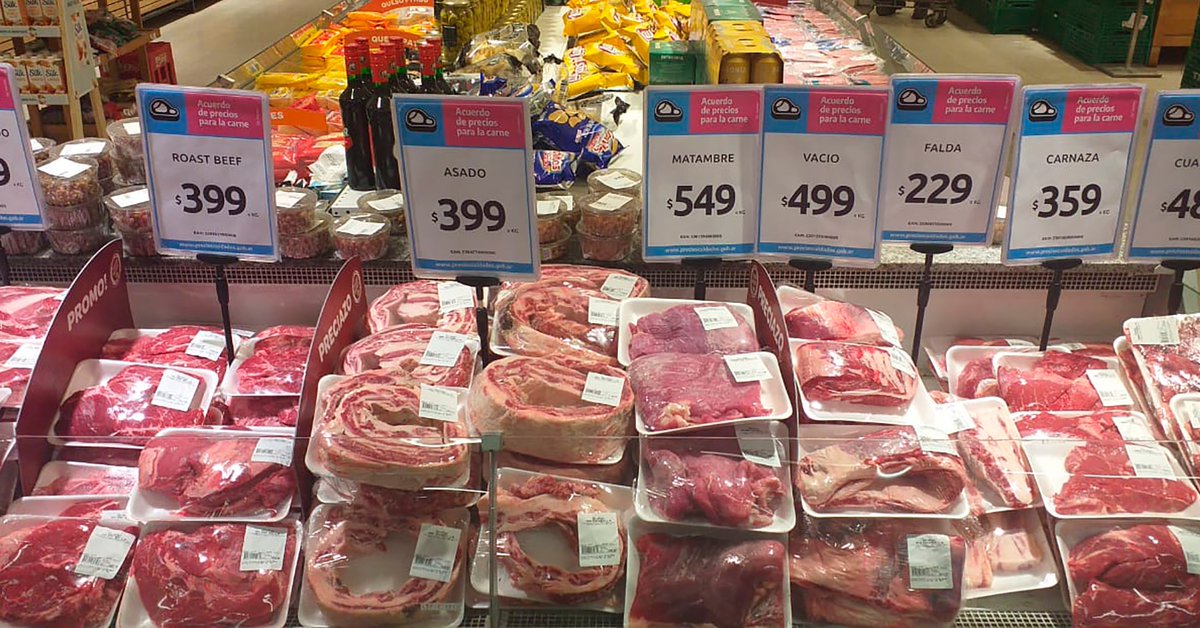 In May the Government decided to close meat exports for 30 days and the Campo responded with a marketing stop.

In the midst of the conflict between the countryside and the Government due to the closure of beef exports, the latest report from the Argentine Beef Promotion Institute (IPCVA) reflected that the prices of the different cuts of meat to the consumer in the The domestic market, registered a monthly increase of 6.1% and 76.2% last May compared to the same month last year, well above inflation, according to the Consumer Price Index (CPI).

On the other hand, in the same period analyzed, fresh chicken registered moderate increases of 1.7% per month and pork breast showed “moderate increases” of 3.8% in relation to the previous month. Regarding the values ​​of May 2020, chicken increased by 58.8% and pork by 67.0%.

According to the IPCVA, the field report was carried out during the first and second half of May 2021. The sample under analysis is restricted to 80 Capital and GBA butcher shops, which were surveyed by telephone and the prices were monitored. in supermarkets it was done in 40 points of sale that were surveyed in person.

The report clarified that there is a variation in the prices observed in the different points of sale: in the Federal Capital and in the northern area of ​​Greater Buenos Aires significant increases were registered in meat, while in the western and southern areas of the GBA the increases were even greater. The 6.3% rise was registered in the butcher shops, however, in the supermarkets prices were observed whose increases were 5.6%.

Heifer meat represents 17% of the sample and had an average price that exhibited significant increases, with a variation of 7.0%, and meat from light consumption farms (young bulls, heifers and calves), which represents a 83% of the basket exhibited prices that showed significant increases, with a variation of 5.7%, compared to the previous month.

In this line, the IPCVA indicated that the price of beef in the 80 butcher shops exhibited prices whose increases are 6.3%, with respect to the previous month, so this is reflected in 74% with respect to May of 2020. On the other hand, in the 40 supermarkets surveyed in Capital and GBA, the average price of beef showed significant increases, with a variation of 5.6% compared to April, this became an increase of 86.5 % last May.

In supermarkets, cuts such as peceto have a higher price ($ 115) compared to those found in neighborhood butchers. The same happened with the rump tail whose price is approximately $ 129 higher in these establishments. A difference of $ 79 was seen on the spine. In this line, the cases of the most consumed cuts, such as the cuts of the wheel for milanesas, the difference exceeded $ 11 and for minced meat there was a difference of $ 9 between one establishment and the other.

However, in the case of asado, supermarkets offer the product at a lower price of about $ 34 per kilo compared to butcher shops. The other meats have dissimilar behaviors: pork breast is $ 42.50 cheaper in butchers, and the price of fresh whole chicken is $ 38 per kilo lower in supermarkets.

It should be remembered that on May 20, the Ministry of Agriculture, Livestock and Fisheries of the Nation, headed by Luis Basterra, published a resolution closing beef exports for 30 days, which caused a strong rejection of the chain agroindustrial and a halt to the commercialization of livestock by the Mesa de Enlace, which ended last week.

The Government seeks with the media to stop the rise in prices to the local consumer, something that has not happened so far, since the high share of taxes on them and an inflation that does not stop is still a problem in the formation of prices , as a consequence of the lack of an economic plan and a macroeconomy in serious problems that were enhanced by the pandemic.

So far the Government remains firm in the decision to continue with the measure, despite the fact that the meat processing industry presented a new proposal to transfer more tons of meat per month at affordable prices, that the Agroindustrial Council awaits a call for a dialogue table, which Alberto Fernández undertook to set up, and the Liaison Table that until The moment did not receive a response from the President of the Nation, to the request for a hearing that the leaders presented last week.

Beef: How is the sector after the marketing cessation and in the face of uncertainty about what the Government will do?
Neither red nor white: despite the drop in the price of beef, production continues to fall and chicken consumption stagnated