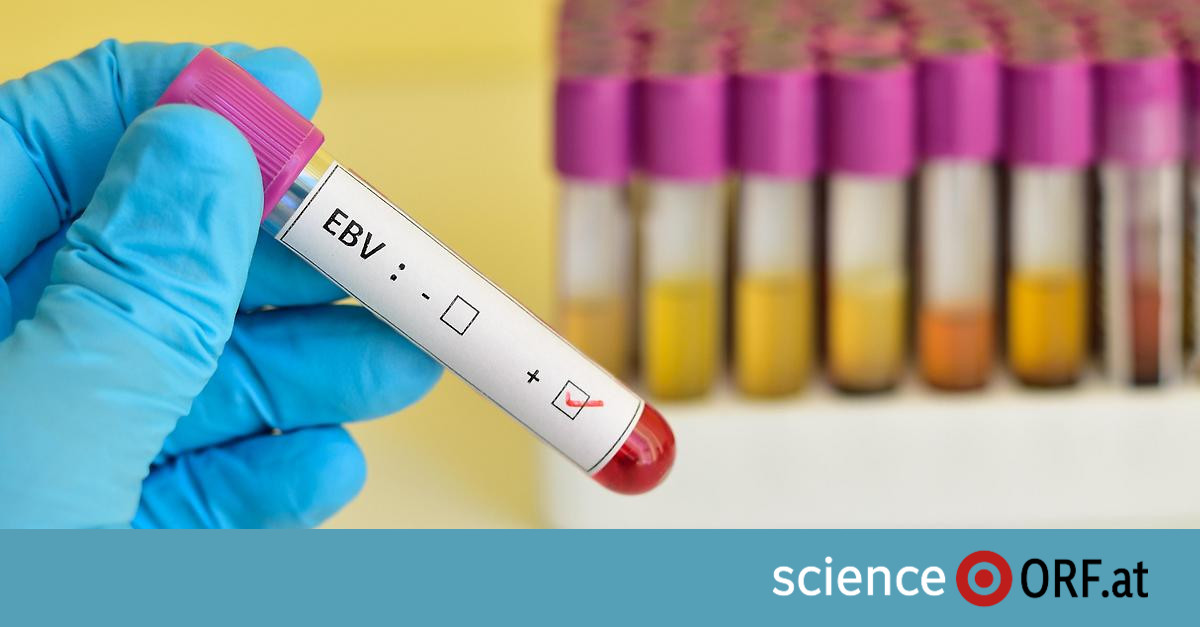 More than 90 percent of all people become infected with the Epstein-Barr virus at some point in their life. The infection is usually completely symptom-free, especially in the first few years of life. Adolescents and young adults are more likely to suffer from fever, tiredness, sore throat – symptoms of Pfeiffer’s glandular fever, also known as “kiss disease”, as the virus spreads through body fluids.

Like all herpes viruses, Epstein-Barr stays in the body permanently. Since its discovery in the 1960s, the pathogen has been associated with some cancers, such as lymph gland cancer (Hodgkin’s disease). We now also know other viruses that can cause cancer or are a prerequisite for its development: e.g. human papilloma viruses for cervical cancer – there is now a vaccination against these.

But not only cancer, other serious and sometimes incurable diseases could ultimately be the result of a viral disease. The Epstein-Barr virus is considered to be a possible cause of the chronic fatigue syndrome – a comparable connection is currently being discussed with SARS-CoV-2 and “Long Covid”. In addition, it has long been suspected that Epstein-Barr could also play a role in multiple sclerosis (MS). According to many experts, the study that has just been published in the journal “Science” provides the most comprehensive evidence to date.

For the work, blood samples from over ten million US military employees were examined. These are routinely tested for HIV every year during their professional career with a blood sample. The researchers working with Alberto Ascherio from the Harvard School of Public Health in Boston identified 801 people who were diagnosed with multiple sclerosis in the course of their professional lives. In the end, all but one had Epstein-Barr antibodies in their blood. At the beginning of the period, 35 of them were negative.

In addition, the study authors were able to show that the originally Epstein-Barr-negative people did not initially have any biomarkers for MS, but they did after the infection. “The study makes it very, very likely that an infection is a prerequisite for multiple sclerosis,” said Wolfgang Hammerschmidt from Helmholtz Zentrum München to the German Science Media Center about the study results. Whether Epstein-Barr viruses are actually the cause or the driver remains open. Unfortunately, the study did not differentiate between a symptom-free infection and Pfeiffer’s glandular fever. Because the latter is known to increase the MS risk.

For Roland Martin from the University Hospital Zurich, the new study provides extensive evidence for the well-known risk factor, but seeing Epstein-Barr virus as the main cause of MS goes too far for him. “The data on the cause of MS over the past 20 years indicate that there is a complex genetic background,” Martin told the Science Media Center. According to the MS expert, in addition to genes, a number of environmental factors probably also have an influence on the development of the disease: low vitamin D, smoking, obesity in late childhood or early adulthood, shift work or a disturbed day-night rhythm and certain intestinal bacteria.

According to the experts, vaccination would be an ideal means of eliminating the Epstein-Barr virus risk factor. According to Hammerschmidt, however, this is not very realistic given the current status. It would be conceivable, however, to prevent at least one symptomatic course – i.e. Pfeiffer’s glandular fever – with a vaccine.

Klemens Ruprecht from the MS outpatient clinic at the Charité in Berlin also praised the well-done study, but emphasized: “Even if an infection with the Epstein-Barr virus is, so to speak, a necessary prerequisite for the development of MS, it is important to point out that by far not every infected person develops MS. ”However, multiple sclerosis can be viewed as a rare late complication.