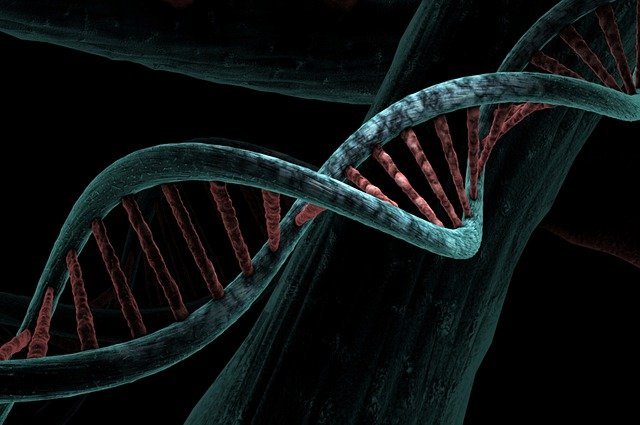 Indications of possible therapies for schizophrenia and bipolar disorder in the “dark genome”?

As researchers at Cambridge University have found, answers to the question of how psychiatric illnesses such as schizophrenia originate may be found in a part of DNA called the “dark genome”. This could be the cornerstone for new therapies. The team published their results in the specialist journal: “Molecular Psychiatry„.

Only 1.5% of DNA is genes: Can the cause of schizophrenia and bipolar disorder develop outside of these?

Medical progress took well into the 2000s before the complete human genome could be deciphered and recorded for the first time. Most of the DNA, however, raises more questions than it answers. The genes that make up parts of the strands of the DNA chains represent only a small part of the entire genome. The other sections are often referred to as the “dark genome”. This is exactly where scientists seem to have found two proteins that have been linked to the development of schizophrenia and bipolar disorder.

Schizophrenia is a protracted psychiatric illness that is characterized by hallucinations, delusions, and impaired thought processes. Bipolar disorder is characterized by extreme mood swings from mania to depression. Little is known about the mechanism of these two diseases, which are considered extremely limiting, making diagnosis and differentiation difficult. Treatment options for those affected are also sparse. The proteins that scientists discovered appear to have evolved from an evolutionary advantage. However, if they are defective, they could promote the development of psychiatric illnesses. “When we scanned the entire genome, we came across regions that cannot be called genes in the classical sense and that code for proteins that appear to be involved in the development of schizophrenia and bipolar disorder,” explains research director and author Sudhakaran Prabakaran in a university press release.

Do geneticists need to rethink?

“That opens up huge potential for targets for new drugs. This is very exciting because no one has ever looked beyond genes for answers to understand and treat these diseases, ”he added. As the researchers were able to prove, these proteins are only found in the human brain. The absence in other mammals led them to believe that these proteins must have appeared with the cognitive development of the human brain. For the team, this also provided food for thought to rethink contemporary approaches: “The traditional definition of genes is too conservative and has led researchers away from discovering the function of the rest of the genome,” says lead author Chaitanya Erady.

In the traditional conception of DNA, the blueprints for proteins are only shown on the genes. But, “if we look beyond the regions classified as genes, what is striking is that the whole human genome has the ability to make proteins, not just the genes. We have found new proteins that are involved in biological processes and that do not work in diseases such as schizophrenia or bipolar disorder, ”says the researcher from the genetics department at Cambridge University.

Most of the treatments available target proteins that are anchored in classic genes. The researchers’ find could explain why diseases such as schizophrenia can be inherited, even if no changes in the known genes have been found so far. In search of treatment methods, Prakabaran founded the company NonExomics last year, which aims to develop new drugs with the help of donations. So far, the scientists have already discovered 248,000 regions in the DNA that do not belong to genes but are defective in certain diseases.

Image by Miroslaw Miras from Pixabay