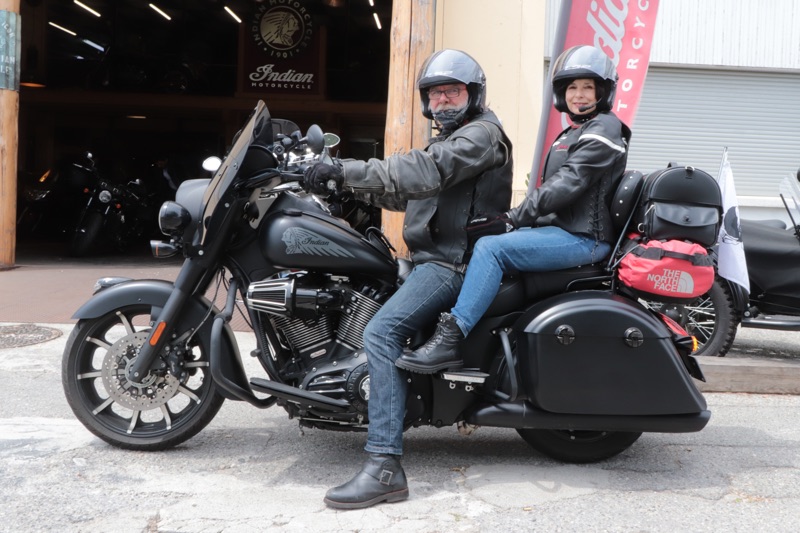 Patrick and Nicole ride a lot, walk around a lot. They chose an Indian Springfield Dark Horse to first cross the roads of their island, Corsica. Why choose a Springfield, Patrick tells us everything at Indian Côte d’Azur in Nice.

Patrick: I chose an Indian Springfield Dark Horse because I ride in Corsica, and in Corsica the advantage of the Springfield is a big 19-inch front wheel and a fork that is a little straight. It’s a motorcycle that rolls up very well because in Corsica we don’t have a straight line. For Corsica it is a perfect motorcycle. This is my second Indian. I started with a Scout and in fact my wife changed me because as we ride a lot it was quite uncomfortable for her. It’s a very, very good urban bike, but for the road, the Springfield is perfect. This one, I’ve had it for 1 year, we’ve done 24,000 kilometers despite the confinement (laughs). We have been to Spain, Italy and the continent (editor’s note: France therefore) but it’s because there was no one on the roads, it’s nice. 24,000 in one year.

Does it have any equipment this Springfield?

Patrick: Yes, I put the windshield, the sissy bar for my passenger and I changed the air filter. That’s all. Because it needs to breathe. I had lots of motorcycles before, my first in 1975. After, as we get older, we go to cruisers, we leave sports a bit to go on cruisers. Before I was in the competing brand, with the cousins, I had an 883 Sportster, a very nice urban motorcycle. Then I went to Indian. It’s curious because it was a friend who is an HD dealer who told me to go see Indian, I didn’t know the brand and now I’m Indian with a capital I (laughs). In Corsica there are not many because there is no concessionaire, the concessionaires are Nice, Marseille or Toulon but hey it is the pretext for crossing too. But we are still about twenty Indian motorcycles on the island.

What are you doing with your Indian Springfield Dark Horse?

Patrick: We do a lot of walks. I use it every day because we have the advantage that it rarely rains, so I use it every day to go to work and as soon as we have a moment we leave. We’re leaving for the weekend. We have Italy which is just opposite, Bastia Livourne is an extra day crossing, it’s easy, Spain too, we still have a beautiful playground. And then Corsica and Sardinia. From Bonifacio, in 15 minutes you are in Sardinia, that’s nice. The south is no secret (laughs). We drive 12 months out of 12. Even in winter I drive. What stops me is the rain, I don’t really like it, but when it’s not raining it’s everyday. I would like to change to a Roadmaster but I’m so in love with this one it’s going to be very, very difficult. But I would like, I think it’s a bike that is complete with good protections, if I had to change it would be for a Roadmaster. Maybe next year. We like this one, it’s our daughter (laughs).

Thank you Patrick for this exchange, good trip to Nicole and you on this Indian Springfield Dark Horse, have a good trip in Brittany and elsewhere!

Through Jean-Michel Lainé. Founder of Emoto and test journalist, passionate about motorcycles, cars and anything that has an engine in general. I started on the Internet in 1996 before the written press from 2010, television from 2012 and then radio in 2020.