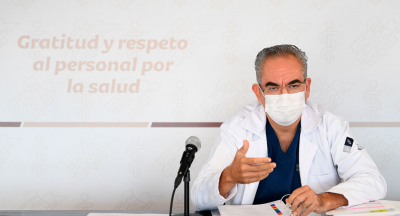 Incorporated National Guard for vaccination against COVID-19 in Puebla: Health

-The head of the unit reported that there were zero deaths in the last 24 hours.

-Martínez García recalled that the mass vaccination day will end on April 30.

CITY OF PUEBLA, May. – In order to reinforce vaccination against COVID-19 in these last three days in Puebla, the Correcaminos Brigade announces the incorporation of elements of the National Guard (uniformed and identified), who will carry out house-to-house visits to place the biological.

Regarding the above, the Secretary of Health, José Antonio Martínez García explained that the municipalities benefiting from this measure are: Acatlán de Osorio, Ajalpan, Huejotzingo, Huauchinango, Atempan, Tepeaca, Tecamachalco, Tehuacán, Atlixco and Izúcar de Matamoros (and localities of each), which will be visited from 08:00 to 20:00.

He reiterated that people 18 years of age and older who do not have their schedule with the second dose, people lagging behind (first dose), people 18 and older who request the third booster, as well as adults 60 years of age or older and/or staff may be vaccinated. doctor who are four months past their last vaccination and who require the fourth or second booster dose. Those interested will have to present an official identification and fill out the vaccine request form that the uniformed officers give them.

Likewise, the official announced that the COVID Call Center (800 2 26 84 31) will be enabled so that inhabitants who are in a state of prostration (who do not have any way of moving to a vaccination module) of these 10 referred municipalities and neighboring areas, as well as the capital of Puebla, request their vaccine against COVID-19, in addition to people who are in nursing homes, in shelters and/or in ecclesiastical associations in the capital of Puebla.

He added that the Secretary of National Defense (SEDENA) will also have 16 mobile brigades for vaccination against COVID-19, from Thursday, April 28 to Saturday, April 30, in the municipalities of Xicotepec, Tehuacán, Atlixco and Puebla, in addition to having massive points in the Second Armored Reconnaissance Regiment, Sixth Armored Reconnaissance Regiment and Puebla Regional Military Hospital in the XXV Military Zone, which will operate from 8:00 a.m. to 5:00 p.m.

Regarding the behavior of the pandemic, the head of the Health Services reported that, in the last 24 hours, eight people were positive for SARS-CoV-2, while no deaths occurred. The official stressed that there are 33 hospitalized, of which five require assisted mechanical ventilation. He explained that medical care is as follows: Health Services, 12 patients; ISSTEP, 10; IMSS, four, ISSSTE, five; University Hospital and private hospitals, one.