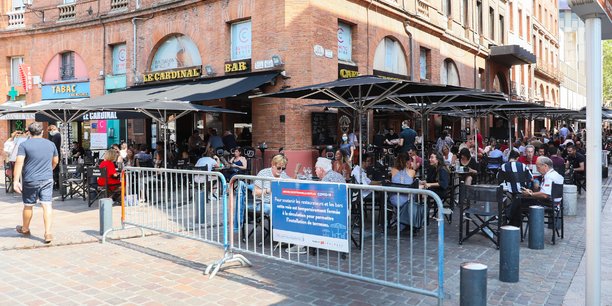 “There are a thousand reasons not to get the vaccine. I don’t see myself telling clients to stand by the door of the establishment when they come for a coffee. We are making people feel guilty, while it is up to everyone to take their responsibilities. Especially since we also take away responsibility for those who are vaccinated, and who therefore believe they can afford everything. In what world do we live? “ asks Sandrine Fernandez, member of the family who manages the Café Albert, located on Place du Capitole in Toulouse.

It is an understatement to say that Emmanuel Macron’s announcements divide traders in the Pink City. The President of the Republic affirmed during his speech on July 12, he wanted to extend the health pass to places of leisure and culture bringing together more than 50 people from July 21. Then, at the beginning of August, to shopping centers, long-term transport (bus, train, plane), hospitals, nursing homes, bars and restaurants, with no minimum number of customers. It will also be necessary for workers in these public places. Failure to comply with the health pass requirement will result in penalties up to and including the closure of the establishment.

In Florida, a young employee discovers the announcements of the President of the Republic while she is busy preparing the establishment for lunch customers: “It makes no sense. Me, I will not do it, I will go and live in the forest“, she quips, without however hiding her discontent.

Like them, thousands of French people shared their anger and frustration on Twitter following Emmanuel Macron’s announcements. As proof, the hashtag #Dictatorship slipped into the top 10 trends of the social network for many hours on July 13, counting nearly 50,000 tweets.

“In catering, the rule is to constantly adapt”

Opinions that the manager of the Lebanese restaurant Byblos, Place du Président Thomas Wilson, does not share at all: “cthis type of reaction is typically French. I think we should look at what is happening elsewhere in the world before challenging the government’s measures“, indicates Rigily Elias. He does not hide to support the announcements made last night.

“It’s a good thing if we want to avoid a new confinement, because many people have already forgotten the barrier gestures. If a client is sick, I believe that we are entitled to know, because I do not wish not that it infects me and infects my staff. I can’t understand why some managers are angry. If they want to get sick, that’s their problem, but here we are in a space public, which is shared “, expresses the manager of Byblos.

A few steps away, at number 5 of the Place du Capitole, the Bibent adopts a similar discourse.

“We follow the sanitary protocol. For a year and a half, we have become accustomed to speeches, to the new rules to be followed, so from August, we will get into the sanitary pass sauce. In restaurants, the rule, c “is to constantly adapt. It is therefore a constraint that we will assume because it is a way of protecting our teams and customers”, indicates Marine Gil, communications officer.

The spokesperson for the establishment nevertheless acknowledges that the restaurant’s employees are tired by this health crisis which seems interminable: “I am not saying that all these changes are not made in pain, but we have to do it, we have no choice if we want to get out of this crisis. We must comply with what the government asks “, she says, while sharing the feeling of some to see individual freedoms being cut.

Françoise Pujo, the patron saint of bars in Place Saint-Pierre (Chez uncle, The color of the panties and The Saint of breasts) confides in The gallery support the measures put in place by the government, whatever their colleagues may say:

“Je does not want us to live locked up forever. As much as everyone is vaccinated and that we are done. We should have done it when it reopens in my opinion, and not a month later. It’s a bit late. So yes, of course, we will lose customers for a month, but at least in September we will be quiet!“says the emblematic boss of the student bar Chez tonton.

“No one can afford another drop in turnover”

At Bibent, the team is more worried about the financial repercussions that the health pass will have on sales for the month of August, or even those after, and does not rule out having to readjust its current organization to achieve profitability.

“The loss of turnover is obviously a big fear. From that point of view, we feel these measures a bit like a sanction. No one can afford a further fall in turnover at the moment. have no other choice but to undergo. Maybe we will have to free up staff to free our loads too. We will discuss it, because we are going to have a drop in attendance, that’s for sure “, explains Marine Gil, communications officer for Bibent.

An observation shared by Sandrine Fernandez, from Café Albert, for whom the desertification of the non-vaccinated clientele leaves little room for doubt: “Potentially, the unvaccinated will no longer come. I can not imagine that we refuse access to the establishment for a QR Code. It is not possible, it seems amazing to me. We don’t want to be the police!“, she repeats.

Rigily Elias is more confident about the repercussions that such a measure could have on the profitability of his establishment:

“JI am not worried about a drop in turnover, quite simply because since this morning, people who were still in doubt yesterday have made an appointment for their first injection. People want to travel, eat in restaurants, go out to nightclubs, so they won’t have much choice anyway.“, let know the manager of the Byblos restaurant.

Still, questions are still unanswered the day after Emmanuel Macron’s speech, and therefore sow confusion within these establishments.

“It will be up to the owners of bars and restaurants to check the sanitary pass.” These words, pronounced on the morning of July 13 by the Minister of Labor Elisabeth Borne, on LCI, raised some concerns in restaurants and bars in Toulouse. Especially since “the police and the forces of order will check that the person in charge of the establishment carries out his checks well “ she added.

If Rigily Elias does not see a problem, it is on the other hand more complicated to consider for the other managers than The gallery has met. “Boss, that doesn’t mean anything. Who is the Boss ? The director, the manager, the one who has the shares? It depends on the status of the companies“, we get annoyed at Café Albert. The manager of Florida indicates that he will have difficulty in taking charge of this mission, while Françoise Pujot (who owns a total of four establishments) intends to hire employees to ensure these controls, not being able to “clone”, to use his words The problem is the same for the restaurant Bibent.

To preserve the turnover of bars and restaurants during the summer season and give the managers of these establishments time to prepare for these new restrictions, the union of trades and hospitality industries (Umih) and the National Group of Independents (GNI) today requested the postponement of the application of the health pass in these places to September, a request refused by the government.