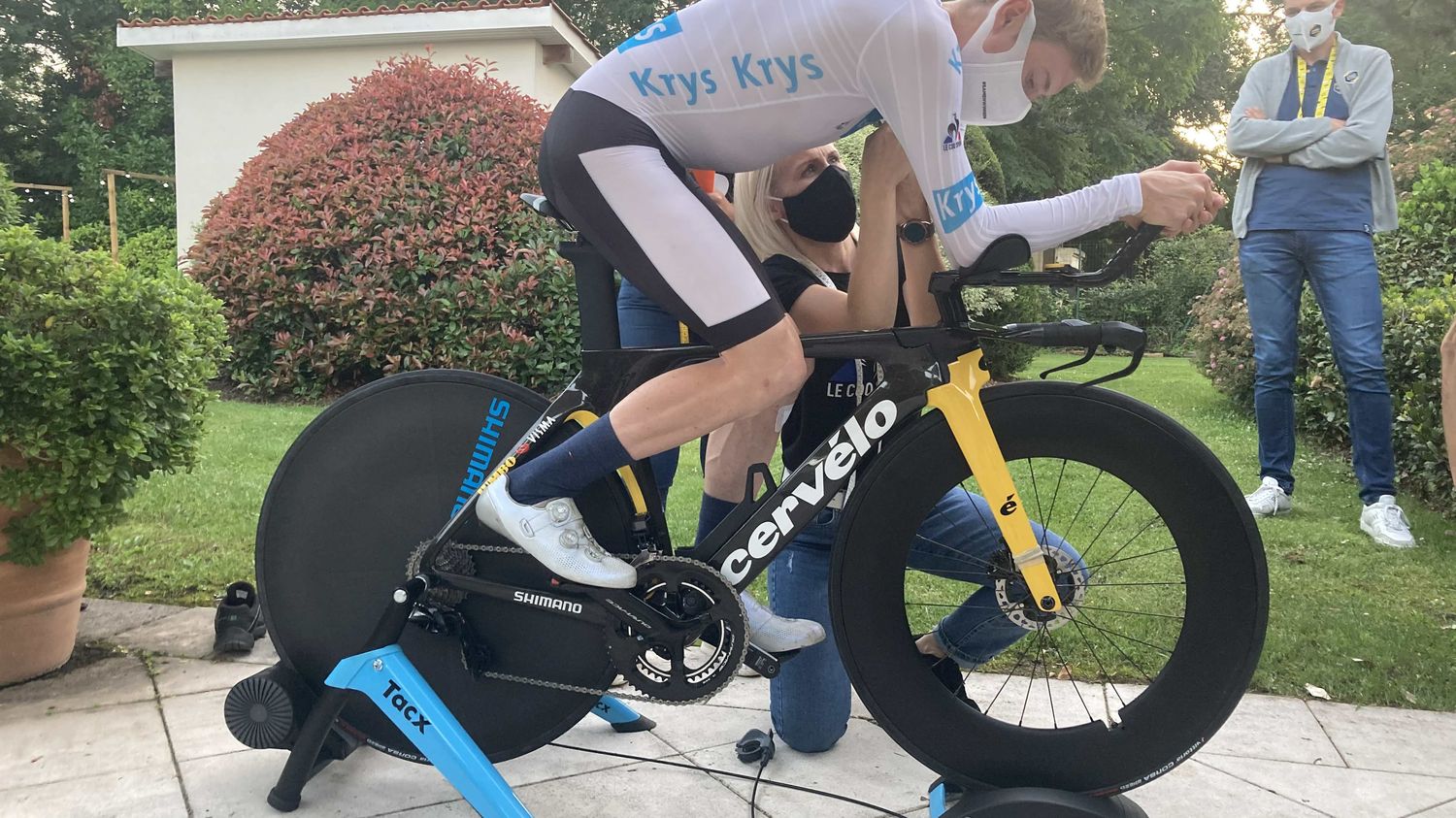 The sun is starting to set over the Bordeaux region, but a yellow glow warms the Novotel de Mérignac where holidaymakers enjoy the swimming pool at the start of the evening. Still in uniform, Tadej Pogacar appears through a sliding door of a UAE Emirates van. The Slovenian honored protocol on arrival at Libourne, and almost finished his day. Like every evening, he still has the care and then the meal, before picking up. But on the eve of the time trial, another appointment is added to his already dense agenda: a fitting session and retouching of his yellow jersey chrono suit.

For the occasion, and as on every day before the time trial, the Coq Sportif teams, official equipment supplier of the Tour, made the express trip from Romilly-sur-Seine, in Aube. “Our driver left this morning with the three sewing machines in a truck, he drove for 7 hours, we took a train early this morning to Troyes “, says Ewa Samson, textile development manager for the French brand. At his side, three prototypists and a model maker. “We don’t do haute couture, so we are not seamstresses”, specifies Christhine. Arriving in the middle of the day in Mérignac, the team waits patiently in a dining room cleared for the occasion. 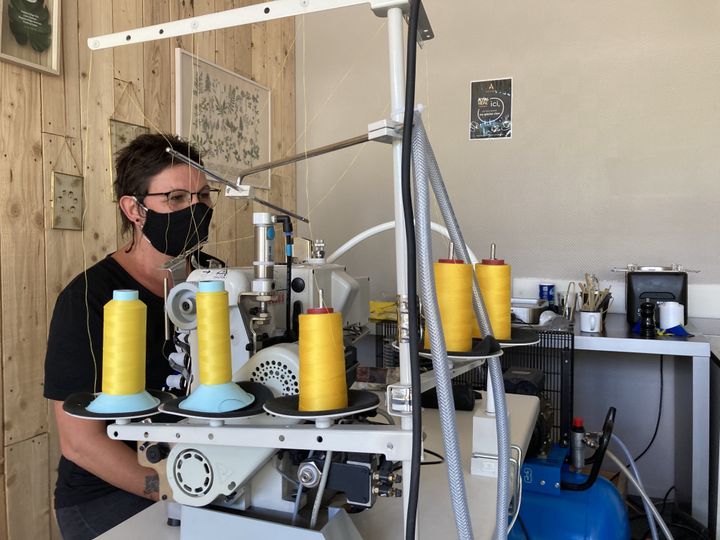 Behind one of the sewing machines, Christhine, prototypist, awaits the arrival of Tadej Pogacar. (Adrien Hémard / franceinfo: sport)

“We always settle in the hotel of the yellow jersey, but the four wearers of distinctive jersey can come and change their outfits”, assures Ewa. In fact, green and polka-dot jerseys rarely cover these details before a time trial. The standard combinations provided are suitable for them. But when it comes to the general classification, a few centimeters can make all the difference in a time trial, especially when you know the care taken in the combinations by the equipment manufacturers of each team. However, to wear a distinctive jersey is to put on a jumpsuit that you do not know. Hence the importance of this meeting.

“The organization of the Tour brings us the original combinations. Then the runner comes on a home trainer, we take the measurements and above all we discuss with him to make the necessary alterations”, Ewa abounds. Already in white during the time trial between Changé and Laval, but also on the 2020 edition at the Planche des Belles Filles, Tadej Pogacar is now a regular. For Jonas Vingegaard, this is a first. “We have been offering this service to runners since 2014. We have seen Froome, Thomas, Bernal, Alaphilippe … He was the funniest one, by the way”, smiles Christhine, one of the three prototypists of the day. 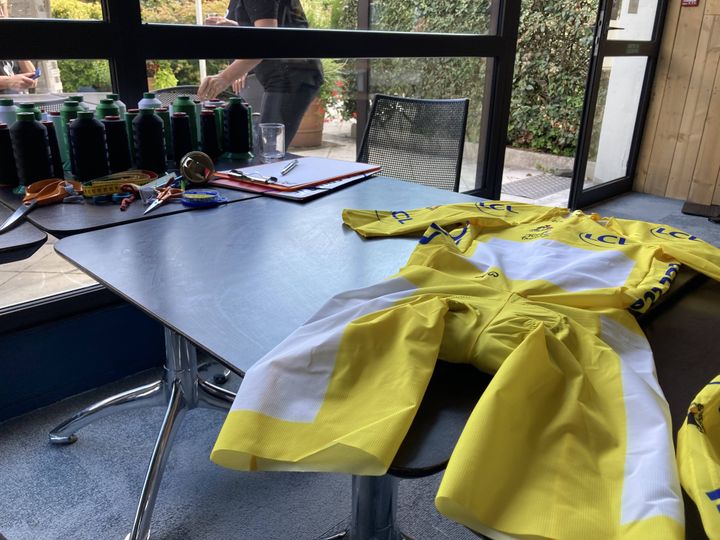 In the background, the spools of thread ready to do battle with the made-to-measure combination of the yellow jersey. (AH)

In total, there are five of them working on these suits the rest of the year, at the brand’s headquarters. “It is continuous work, which never stops, because innovation requires being always on the lookout. Runners try on our outfits during the year, we ask for them with our partner in Portugal “, justifies Ewa, who will not reveal the material used. Trade secret. In Mérignac, three machines followed them, each with a specific function: sewing, binding, stitching.

Once the measurements have been taken, it takes between 1 and 2 hours of work minimum, per swimsuit. The prototypists therefore have some for the evening: “We will not eat until after, we are there for the runners. Sometimes they arrive very early, sometimes they take their time, they eat and only come after. Froome always came late “, says Christhine. Meticulous, the Briton came with his normal yellow jerseys, which he also had them touched up.

This year, the novelty is the zipper, placed in the back to hug the spine, and not on the stomach. “I spoke about it with Bernard Thévenet, it is to avoid bumps on the stomach. Runners appreciate “, justifies Ewa. It must be said that the French brand is putting the small dishes in the big to seduce the leaders of the Tour, sometimes skeptical or reluctant to give up their usual outfit. But this is not the case with Tadej Pogacar, now used to exercising. A little too much perhaps. Waited on the hotel terrace behind a screen, the yellow jersey will not come down from his room, after a passage as lightning in the hall as one of his attacks. 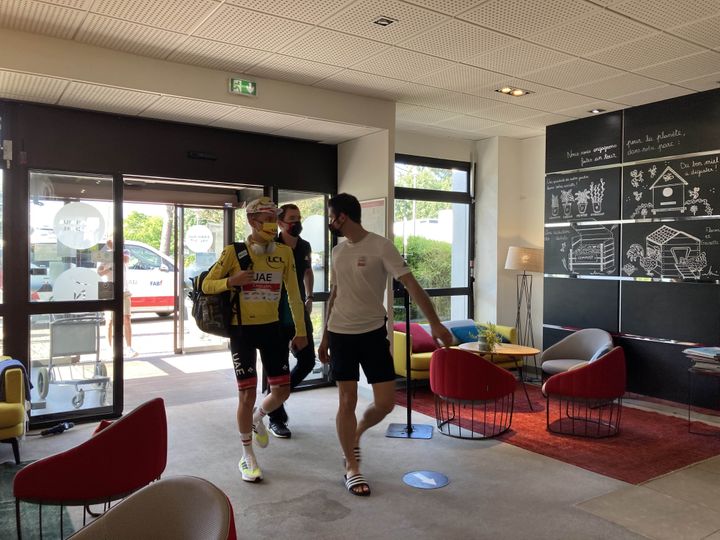 The arrival of Tadej Pogacar at his hotel in Mérignac. (Adrien Hémard / franceinfo: sport)

After almost three weeks of the Tour, including almost two in yellow, the champion is tired. Above all, he has already tried and worn the said combination during the time trial between Changé and Laval, at the start of the Tour. Add to that his large lead in the general classification, and Pogacar decides to trust the prototypists who, luckily, kept the outfit on which the measurements of the Slovenian had been taken at Changé.

“He was in white, this time in yellow, only the color changes”, relativizes Ewa, after the heat stroke. Disappointed not to have seen the champion, the prototypists took action on this difficult fabric to work with. “We had the machines checked and adjusted yesterday, to avoid any incident”, slips Christhine. “It’s a big responsibility. In addition to the pressure, you have to be quick because afterwards, there is the flocking to be done in the back”.

Warm in his room, Tadej Pogacar will recover his swimsuit to sleep with, if he wishes. In the meantime, his runner-up in the general classification and the best young rider, the wearer of the white jersey Jonas Vingegaard (Jumbo-Visma), has his appointment at 9 p.m., after having recognized the route of the stage. For the first time, the Dane must pass into the hands of the technicians to put on a distinctive jersey in a time trial, with his second place overall to be defended on Saturday. 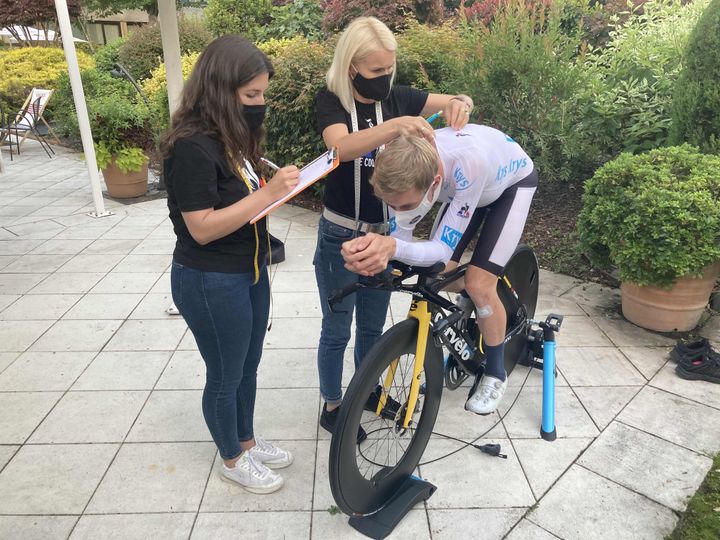 The day before the start of the time trial between Libourne and Saint-Emilion, Jonas Vingegaard had his wetsuit adjusted. (Adrien Hémard / franceinfo: sport)

9:20 p.m., Jonas Vingegaard and his staff arrive. After putting on his outfit, the Dane gets into position on his time trial bike. The measurement begins: it will last only a handful of minutes. About ten centimeters on the arms, a surplus under the armpits, and a slight touch-up at the top of the back: Le Coq Sportif’s little hands still have work to do before delivering the Dane’s suit.