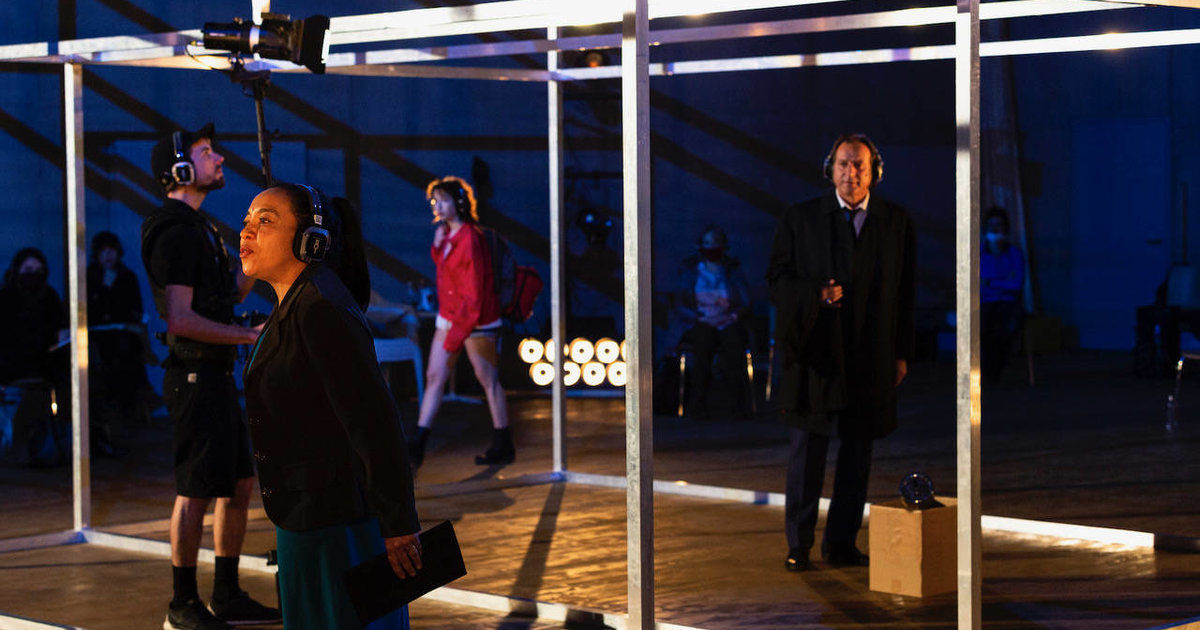 In the wake of Chekhov, the round of souls according to Alexandre Doublet

The promise of childhood. The one that makes the seat of consciousness. The one we lock up in the box of memory. The one who reappears like Aladdin from his teapot. You are at the heart of Return to the Cherry Orchard, Alexandre Doublet’s show, in Geneva these days, before the Théâtre de Vidy in Lausanne and the Théâtre Les Halles in Sierre.

In the huge hall that serves as a painting workshop at the Comédie, a house stands, its metal frame in truth. Spectators are seated around this dacha skeleton. It’s a sensory field, it envelops you and won’t let go for 1h45.

Read also: Alexandre doublet, a luminous journey to the land of shadows

Return to the Cherry Orchard. It took a form of mad love for Anton Chekhov, a faith also in the dazzling power of a nocturnal word to rewrite his cherry orchard. That’s what Franco-Swiss director Alexandre Doublet did, after diffracting in 2019 Platonov of the same Chekhov, transformed into Love is a River. It doesn’t refresh the part that doesn’t need it. He incorporates it, better still, he adjusts it to his interpreters, better still, he inoculates it into the brains of the witnesses. And then it is a gift from the shadows.

For the transfusion to work, he imagined a device that makes each visitor a floating island. In the room, you sit where you want. You are in any case connected to the actors and actresses by an audio helmet, whose saucers emit a purplish light. The performers play mezza voce this story of reunion and breakup, as if they were among themselves, softly singing an impossible farewell.

The Sun by Marguerite Duras

See how it begins. Delphine Rosay Gomez Mata, a mourner’s black dress, pythia’s cherry lips, stops at one newcomer, then at another. In the ears, an amused and youthful voice. She interviews children, asks them what they find beautiful in life, if they happen to be sad, what is school for. They respond from the height of their 7 years with a contagious freedom. The journalist in question is Marguerite Duras commissioned in the 1960s by French radio. It is a preamble and it is a key.

You float and it is at this moment that the haughty Anne Sée, in the role of Catherine, enters the lists of memories. She walks, frozen like a sleepwalker, a miniature bag at her fingertips. It is she who returns to the Cherry Orchard, the domain of her youth. She left him when her little boy drowned. She wanted to forget everything in the arms of a lover, far from the cherry trees of yesteryear. But she did not resist the call of her brother, who remained there. Here he is, tie like a wedding day, embodied by the overwhelming Pierre-Isaïe Duc.

Everyone is then free to change perspective and seat. To swing with Elie Autin who plays Esther, to stare at the youth of Arianna Camilli, the landlady’s child, to weather the storm of Malika Khatir, the servant’s daughter who ransomed the Cherry Orchard like Lopakhine in Chekhov’s text . You can also park in the same place and go down the river with the protagonists, capsized sometimes by the voluptuousness of a piano, sometimes by the screeching winds of Wuthering Heights sung by Kate Bush.

The beauty of Back to the Cherry Orchard is to seep into every pore of reverie. Pierre-Isaïe Duc implores Anne Sée: “A memory, quickly!” Her: “We never left each other.” Later, when the Cherry Orchard will be really lost, when Malika Khatir alias Lozen will reign over the lands of his former bosses, the brother will try a historic phrase. He couldn’t do better than: “The sun has set.” And she will only have a poor “yes” to put on the twilight. At that time, they will be poignant like old orphans.

Around them, their bewildered comrades will waver. And we with them, sentinels wearing helmets that are red lights in the shadows, we who suddenly form a community of souls. All ghosts of a childhood not quite lost. She returns, the time of a hallucinating banquet, in The trip by Baudelaire: “For the child, lover of maps and prints…”

This end in the form of a mouthpiece echoes the amazed kids of Marguerite Duras. Back to the cherry orchard is a requiem and a promise. Childhood, which is not a matter of age, cannot help flirting with the unknown. La Cerisaie is its cradle. All mirages are allowed.