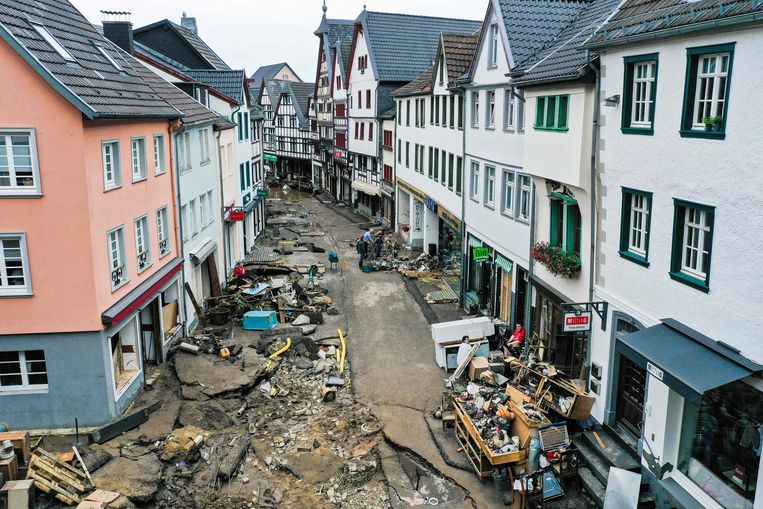 In the gray devastation of Bad Münstereifel, clearing rubble seems pointless. ‘It could have been worse’

Cities and villages in the river valleys of the German Eifel were badly hit by the rising water. In the town of Bad Münstereifel along the river Erft, everything is smeared with a thick layer of dung and the furniture of homes and restaurants roams the streets.

Anyone who only takes a cursory glance at the Marktstrasse in Bad Münstereifel would almost think that it is a busy, but pleasant summer afternoon. The sun is shining in the historic center of the picturesque Eifel town, a chip cart on the square is working overtime. In front of the town hall, people gather around food stalls. Here it is mainly the clothing of all those people that betrays what is going on. Everyone walks in boots, in an old T-shirt or dilapidated overalls. Most are covered in mud almost from head to toe. A strange sight in this relatively high and dry place. Where in the toy shop opposite the town hall the puzzles are still displayed exactly as they were a few days ago.

But then: around the corner, barely 50 meters away, where the Erft flows. A usually fairly harmless tributary of the Rhine, which showed its destructive power on Wednesday evening. The normal bed is barely visible. The entire road surface has been washed away. Tens of meters further downstream it all gets a lot more bleak. There is a car wreck in the Erft, a chair hangs from the sun blinds of a house. A half-standing railing along the water is covered with washed-up clothes and branches.

More than two meters of mud

Sebastian Kaminski stands looking ahead against that dystopian backdrop. He works in restaurant Erftblick: home-style German cuisine throughout. How high was the water here? He takes out his phone and shows a series of videos. In the last video, the text above the shop window of the shop opposite the restaurant can just be read. Below that is only swirling mud, more than 2 meters above street level. What that means for the restaurant can be guessed. Everything is smeared under a thick layer of dung. All the food and much of the inventory are beyond salvage. As with all shops and restaurants along the Erft.

Kaminski lives above the restaurant: high and dry. He himself was not there when it all went wrong here on Wednesday evening. “I was shopping in Rheinbach, 25 kilometers away.” There too the water raged: he shows a photo. From his car, floating in a parking lot. There was nothing for it but to return to Bad Münstereifel on foot. With a stopover in Euskirchen, to see if his aunt was safe. Dangerous? No, especially a very long trip. “The road here was passable.”

And now? He and owner Christof Golunski can’t really do much more than wait. The worst mud has since been removed. The smeared and thawed food stock is already in one of the many container loads of waste that has left the city. “For the time being, we have no electricity, gas and clean water,” sighs Golunski. “Only when that has been repaired can we really start here.”

Until then, they live at restaurant Erftblick, and for that matter in the rest of Bad Münstereifel, especially at the moment. Waiting where necessary, cleaning up where possible. That is already going better on this Saturday afternoon than Friday: the road to Mechernich, to the highway and to the outside world is open again. The internet and the telephone network are now working reasonably well again. But what next? The city was doing reasonably well in terms of tourism, especially after the arrival of a large number of outlet shops around the old center. They have also been hit hard. “It could take up to two years before they are back on top,” Golunski predicts.

Reception in the sports hall

Meanwhile, a crisis team from the municipality and the emergency services tries to help wherever it can. Emergency shelter is available in the sports hall, food and clothing are available. There is also a doctor’s post and residents can go there for a shower. “Many people have helped by bringing things,” says a municipal spokesperson. The local Aldi, also mud-swept, even plays on the doorstep for giveaway shop. The stock of fruit and vegetables has already been taken. Water, bread, eggs and cans of pea soup are in great demand.

The number of people who live with a completely uninhabitable house in Bad Münstereifel still seems reasonably manageable. Because of all the shops and restaurants directly on the Erft, the middle class mainly caught the tidal wave. But that is different in Eicherscheid, two kilometers upstream. The village is in fact little more than a long street that follows the course of the Erft. More than in Bad Münstereifel, there is an exodus of drowned and engulfed household goods.

The village is now reasonably accessible again. Farmers, local businesses, anyone with a lot of cargo space helps with clearing rubble. Opposite the church, about twenty residents welcome another truck. The loading platform is filled in no time with barely definable planks and pieces of plastic. Further in the village, a makeshift recycling center has now been set up. There are the washing machines on one pile and the refrigerators on the other.

Roderick and Iris Wallace have already largely cleared the bottom floor of their house. It was a scary night, they say, from Wednesday to Thursday. Residents were not evacuated here. “We were on the second floor and didn’t sleep a wink,” says Iris. The water eventually flowed down the street about three feet high: a neighbor points to the wall, where the mud stains roughly indicate the highest level. “Had the flood been more violent, it could have been even worse here.”

Even though it was already quite catastrophic. There are stories about victims in the village: a resident is said to have taken a picture of the rising water and then was swept away by the current. At the same time, everything is still so fresh, and the mess still so big, that it’s still very early to take stock. And despite all the damage, most residents of Eicherscheid now prefer to stay at home. Because there are also stories about looters in Bad Münstereifel.

For now, there is only one thing to do in Bad Münstereifel, Eicherscheid and countless other places in the river valleys of the Eifel. Clearing the rubble, with united strength, as good and as bad as it goes. Between the gray rubble directly on the river it all seems hopeless. But in the sun at the chip shop in front of the town hall and when loading all the trucks in Eicherscheid, people are laughing again. If only because every container filled with rubble is another small step on the road to recovery.

You can read more about the flood disaster in Western Europe in this live blog.