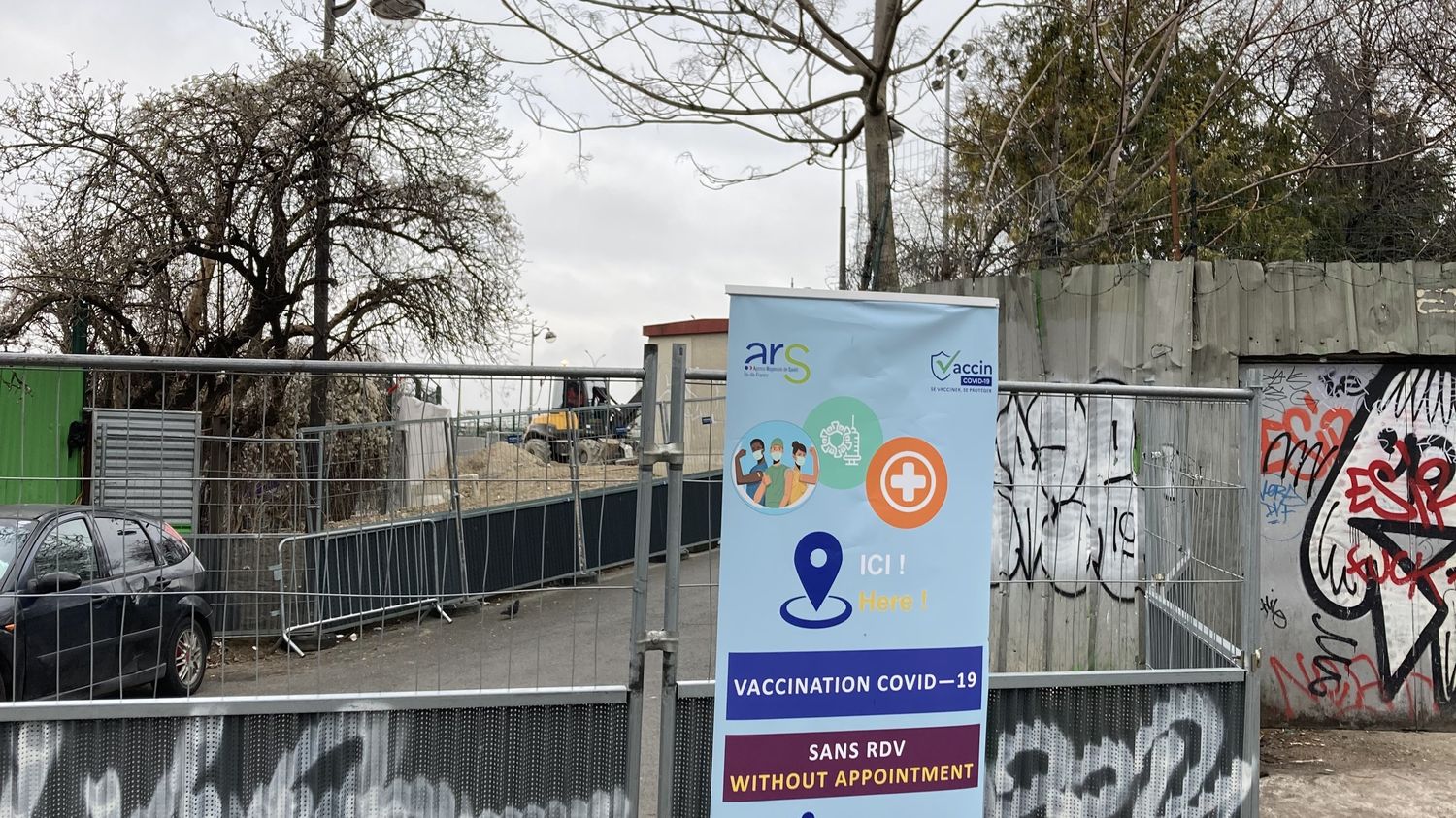 in Paris, Samusocial is campaigning to vaccinate migrants against Covid-19

“JI am in France illegally. I thought I was not entitled to vaccination”says Nour* in shy English. This 23-year-old Afghan, who arrived in January 2019, finally dared to push the door of Samusocial de Paris, installed for the day on avenue de la Porte de la Villette in the 19th arrondissement of the capital. On this cold February morning, the young man, black cap screwed on his head and blue surgical mask on his face, will receive his first dose of vaccine against Covid-19.

Since August, the mediators of Samusocial de Paris, in partnership with the town hall and the Red Cross, have been working to ensure that people in great difficulty and far from the health system, such as foreigners in a regular situation or not, can also benefit from protection against Sars-CoV-2. Twice a week, on Wednesdays and Thursdays, the Samusocial team put up their banners stamped “Vaccination Covid-19 without an appointment”, written in French and English, a stone’s throw from the Porte de la Villette metro station, on the path leading to the dining halls of the Restos du Coeur and food distribution.

“Our vaccination campaign has been a success thanks to our network of associations, word of mouth and the very high attendance at this Restos du Coeur food distribution site”, explains Samy Rasli, coordinator of public health actions at Samusocial. Like this lady in her fifties, who, while putting her pack of milk obtained with food aid in her bag, saw the sign and took the opportunity to receive her third dose.

See also  "She owes me everything": Nicolas Sarkozy attacks Valérie Pécresse again after his defeat

Installed under a barnum at the entrance to the prefab lent by the Restos du Coeur, two mediators from Samusocial and two translators, one in Arabic and the other in Pashto and Dari, two languages ​​spoken in Afghanistan, have been ensuring, since 10 a.m. morning, the first exchanges with the men and women coming to be vaccinated.

“For these people, going to a classic vaccination center is too complicated: there is the language barrier and often they do not have social security coverage.”

Nour, who lives in a former La Poste sorting center converted into a shelter, tried to get vaccinated in a pharmacy, once his refugee status had been acquired. “But I was asked for 25 euros which I did not have”, says the young man, without financial resources, like more than one in two people who come to Samusocial. In the prefab of barely 15 m2 where refugees, asylum seekers and illegal immigrants parade, no request for vaccination is ruled out.

“Legally, vaccination is open to everyone, including people without Carte Vitale or CMU, but some caregivers are unaware or simply do not want to do it.”

Despite the winter cold that a single electric heater tries to ward off, the entire Samusocial team takes the time to dispel the last doubts of people who are still hesitant to get vaccinated, in particular by reassuring them about the possible side effects of the vaccine or its free. Since October 2021, 23 operations like this have made it possible to vaccinate 623 people, installed in turn behind the screen where two nurses take turns.

“As soon as the third dose was recommended nationally, there was an influx of primary vaccines”, remarks epidemiologist Lison Ramblière, who has been conducting a survey for the Paris Samusocial Observatory since December among people who have come to be vaccinated. 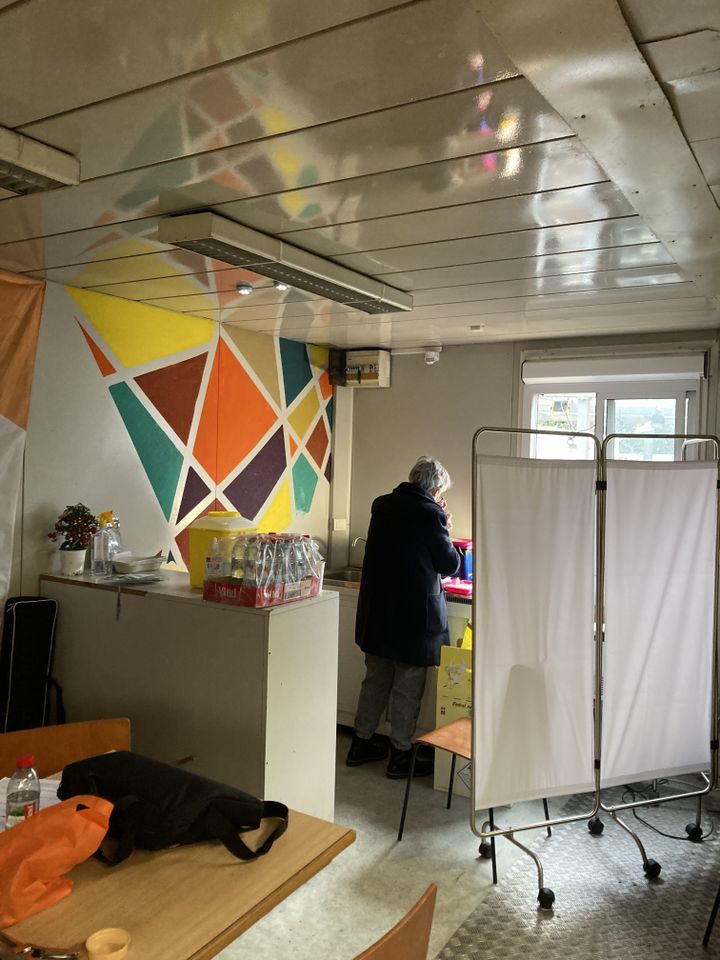 One of the nurses from Samusocial in Paris prepares an injection, at the vaccination center located near the Porte de la Villette. (GUILLEMETTE JEANNOT / FRANCEINFO)

Among these recently arrived migrants, some find that their vaccination certificate is not valid on French soil. They must then restart their vaccination schedule with a dose of Pfizer. AT like Fahim*, 27, and Saïf*, 25, who arrived in December from their native country, Bangladesh. They transited through India, Serbia and Dubai, where they received two doses of Sinopharm. But the Chinese vaccine is not recognized in France.

The two Bangladeshis are therefore entitled to a rapid serological test (Trod). Samusocial nurses make it “systematically” one to people whose vaccination course is not proven or recognized. “This serological test allows you to quickly know if a person has been infected with the virus or if they have been vaccinated outside the EU or if they have lost their proof of vaccination, you can know their antibody level.says Samy Rasli.

Nour* came to be vaccinated because he thinks he needs the vaccination pass to take French lessons. Since January 24, the latter has become essential for many migrants. “Those who live on the street, in a squat or a camp, need to be able to warm up for a few hours in a café”, emphasizes Lison Ramblière. About 30% of those vaccinated do not have a roof over their heads.

“Often this certificate acts as an identity document during checks by the police.”

The pass is also necessary to go see a sick relative in the hospital or to respond to an employer. “Because although these people often work undeclared, in catering for example, they are asked to have a health pass”, assures Samy Rasli. You also need a vaccination pass to take the train over long distances, which migrants sometimes have to do as part of their regularization process.

The printer, which sits on the office of the mediators, has been constantly spitting out vaccination certificates since the start of the morning. The Samusocial team systematically keeps a duplicate, because not all vaccinated people have a telephone equipped with the internet and they frequently come back to ask for a copy of their lost certificate. For the others, Stéphane, one of the mediators, takes a few moments to install the TousAntiCovid application with them, when their package allows it.

“We also take the time to solve administrative problems, such as non-open rights, loss of Social Security identifiers or papers proving prior vaccination.”

Half of the people who present themselves do not have health insurance (51%), “not even the AME”, state medical aid, points out Samy Rasli. Vaccination is an opportunity to create a temporary Social Security number for them or to redirect them to the social worker at Restos du Coeur, who is on duty in the prefab next door.

This consultation also sometimes gives the opportunity to address a health problem for these people on the margins of the health system. Like this elderly man who complains of pain in his arm since his first vaccination. The nurse advises him to go see Doctors Without Borders when he leaves. The NGO has set up its mobile clinic under white tents for the day, a few steps away. “If they are not there, we notify 115 so that they can come and see the sick person during the evening patrol”artist Samy Rasley. “We can also redirect them to hospitals with hotlines for access to health care.”

The clock is ticking. Soon 4 p.m., the food distribution is over, the Restos du Coeur canteen has closed. Samusocial nurses administered 25 doses today. All primary vaccinated left with their appointment for the second dose in their pocket. The mediators will make sure to call them back so that they don’t forget to come. That vaccination operation in the field is due to end at the end of March. “But we will adjust the duration of our action month after month”glisse Samy Rasli.

* The first names have been changed at the request of the interested parties.