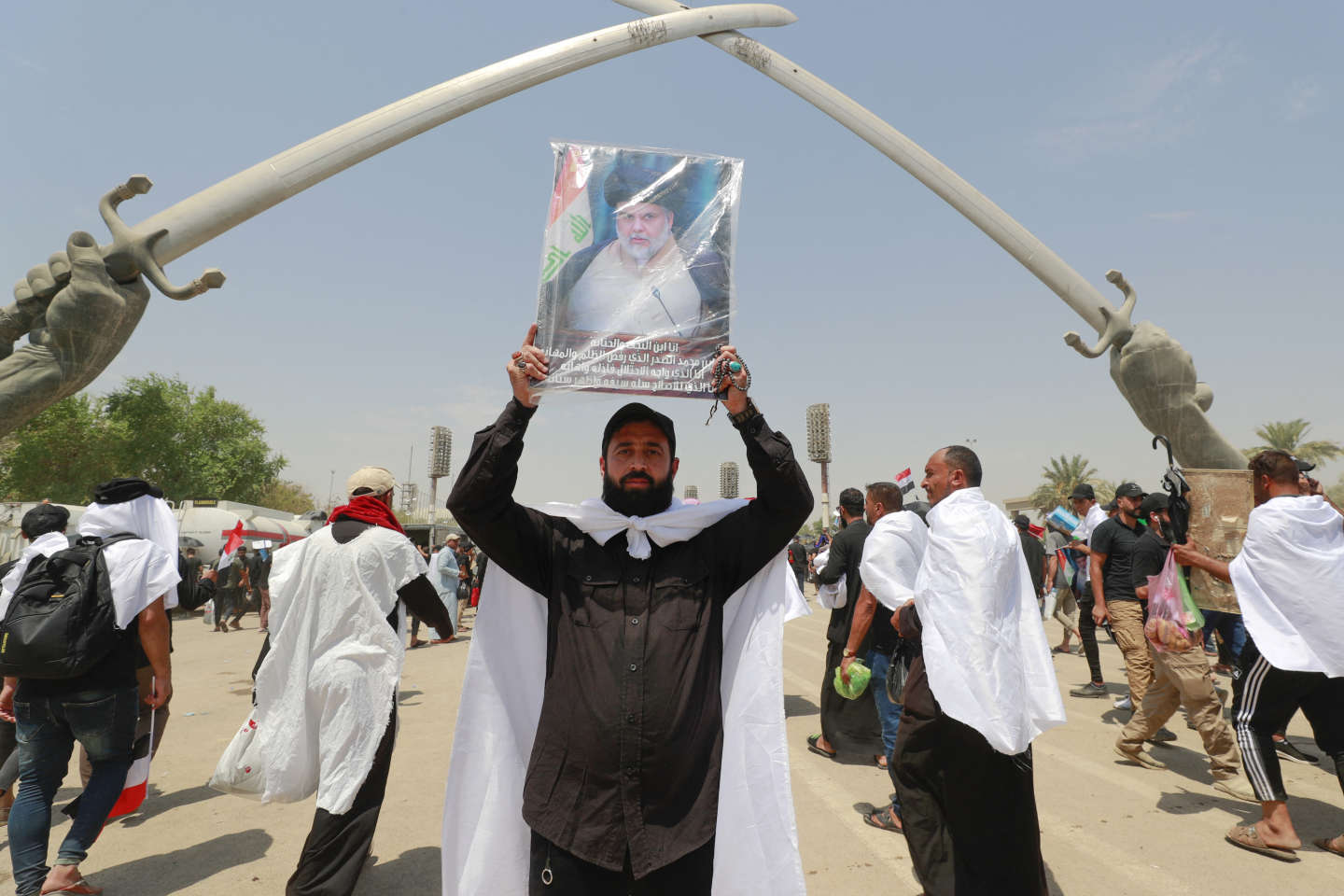 In Iraq, the Sadrist movement is gaining momentum

The harsh light of the midday sun crushes Celebration Square, in the heart of Baghdad’s green zone. The thermometer reads 49°C, the heat is stifling. Under the two monumental arches, representing swords, tens of thousands of Iraqis came to show their fervor and their veneration at Moqtada Al-Sadr, the time of the weekly prayer, Friday August 5th. In yet another show of force against his Shia rivals, the populist leader has summoned the spirit of sacrifice from his supporters to back the ” revolution “ which he calls for to end the political impasse born of the legislative elections of October 2021.

“Foreign-linked parties have plunged Iraq into corruption and poverty. (…) Those who do not support the reforms will suffer militias, kidnappings, smuggling, normalization [avec Israël] and murders, warns the imam in his sermon, cut short due to the heat. People fainted. Still valiant, groups of young people leave, singing the praises of their leader and jeering at his rivals. “Look at this crowd! All Iraqis are becoming Sadrists. Nouri Al-Maliki should find a hole to hide in”shouts a man who presents himself under the nickname of “Abou Samir Al-Sadri”, threatening the former prime minister, a pet peeve of Mr. Al-Sadr.

Read also: Article reserved for our subscribers In Iraq, high political tension between the Shiites

“We have come to tell Iran and other countries that we will defend our country against their plots, he adds, as he prepares to return to Najaf, as he has been ordered to do by the Sadrist leadership. We’ll come back as soon as he asks us to. We follow him blindly. » Other supporters are returning to Parliament, where they have been camping for a week, in turn, to protest against the decision of the coordination framework – a coalition that brings together Shiite militia parties close to Iran and the Dawa party of Mr. Maliki – to appoint Mohammed Shia Al-Soudani as prime minister, whom they perceive as “the shadow of Maliki”.

Many had never entered the Assembly before, “the den of the whales” – the corrupt – as they call it, not even in the green zone, the ultra-protected neighborhood that houses the institutions, if not in 2016, during a previous Sadrist demonstration. “Corrupt politicians live in another dimension. In Parliament, there is air conditioning everywhere, even in the toilets,” laughs Abbas Fadhel, a supporter of Karbala, where he receives, at best, six hours of public electricity a day and a hefty bill to pay for the private generator. Friday, after the prayer, they found the doors of the Assembly closed, guarded by members of the Sadrist militia of the “peace companies” (Saraya Salam).

You have 62.05% of this article left to read. The following is for subscribers only.